[Episcopal News Service – Seattle, Washington] In a plot that cozies up to the Duwamish Waterway, in the shadow of tug boats and a grain storage warehouse, is an unlikely sight: eight raised beds of lettuces, green tomatoes and squash blossoms.

There’s a carpet of wood chips. There’s a picnic table and some benches. A small compost bin stands against a chain-link fence. On the other side of the fence grow wild raspberries, cascading toward the waterway where tugboats pass on their way to work in the Port of Seattle. 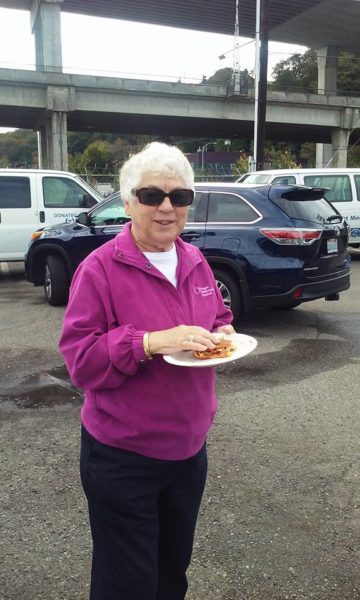 The idea of planting vegetables on a plot of land at the Mission to Seafarers Seattle office came to Hawkins and Johanna Padie, a Seafarers supporter from St. Margaret’s Episcopal Church in Bellevue, Washington, during a conversation in the fall of 2013 about using more of the Mission’s space for ministry. The corner of land in question was “just rough, gray dirt,” he said.

The idea of an urban garden emerged and Hawkins contacted Seattle-area resident Brian Sellers-Peterson, senior advisor to the president of Episcopal Relief & Development and a champion of church-community agriculture. Hawkins said Sellers-Peterson and Padie made the garden happen.

In 2104, volunteers built and cultivated six raised beds for which St. Margaret’s donated the materials. That year the beds produced 1,000 servings of vegetables for local food banks and shelters. Lutheran volunteers added two more beds in 2015. Also last year, employees from Microsoft, which is headquartered in the Seattle area, helped to do general maintenance and they will return this year during the local United Way’s annual “day of caring.”

Volunteers grow vegetables for visiting seafarers, and donate to a local food pantry and churches. Other volunteers come to help with maintenance, such as the group of junior high school students from the Episcopal Church of the Holy Cross in Redmond, Washington, that came on a recent weekend to pull weeds, spread more wood chips, trim up the fence line “and help us continue to make this a place of welcome,” in Hawkins’ words. 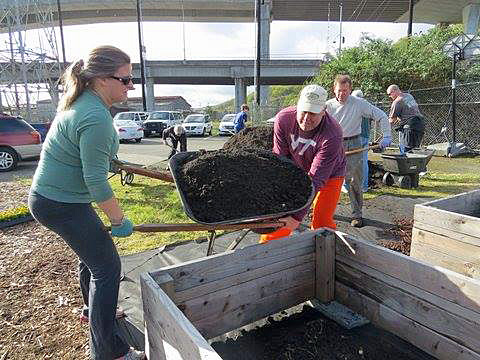 The beds yielded 2,000 servings of food in 2015, Hawkins said, and earlier on the day he spoke to Episcopal News Service, volunteers harvested between 20 and 30 pounds of food. This year volunteers planted the beds with tomatoes, zucchini, squash, kale, chard and lettuces. Most of the food that doesn’t go to seafarers aboard their ships goes to the West Seattle Food Bank, about three miles south of the garden, and area Episcopal and Lutheran churches.

In 2016, Hawkins said, a conversation about how to offset the carbon footprint of churches buying altar flowers that come from outside the United States led to volunteers planting flowers and bulbs at the center. Church saved hundreds of dollars using the flowers and much of that money came back to the Seafarers in the way of donations. Amid all the work involved “we built community at the mission,” he said.

The garden is just a part of the Mission to Seafarers’ ministry. In operation for more than 40 years, the Seattle center provides on-board services to 30,000 seafarers. And volunteers greet cruise ship employees each summer. Some of those cruise ship employees get a ride in one of the mission’s vans from the port to downtown Seattle. They’re asked to donate $5 for the ride (as opposed to the $20 or more that a taxi ride would cost) and the donations go back into the ministry. More than 10,500 crew members make use of the service during the summer.

The mission also provides chaplain services and, at Christmas, volunteers sew, fill and distribute ditty bags with toiletries and a hand-knitted hat. Seafarers can use computers at the Mission to Seafarer’s Seattle center and can also connect their own devices to the internet through the center’s Wi-Fi. Volunteers bring cell phones and low-cost phone SIM cards to seafarers who cannot leave their ship so that they can call home while in port. They also offer to do any necessary shopping for the mariners.

The Seattle Mission to Seafarers has hosted people from 100 countries. A third of them are from the Philippines and roughly another third come from China, India, Malaysia and Indonesia, according to Hawkins. Many of those seafarers have spent weeks, months and even years aboard their ships. U.S. Homeland Security rules make shore leave difficult for many seafarers.

Forty percent of Washington’s jobs depend on international trade and those jobs pay 25 percent more than those involved local manufacturing and the service sector. Seafarers “are lubricating the lives of one of the wealthiest cities and states in the world” yet they live below many people’s radar, Hawkins said.

In the Mission to Seafarers’ work “there’s a chance for us to make a difference in people’s lives that is tangible and I believe as Christians and the children of God, we’re called to do that,” he said. 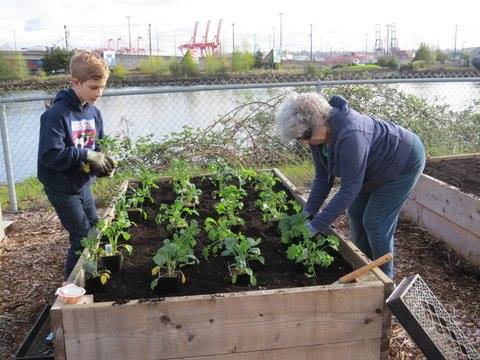 That chance to change people’s lives comes with a dichotomy, Hawkins said:  “We go out expecting to change someone’s life and what happens is we are changed” by meeting people who are some of the unsung workers of the global economy.

Counting the 300 women and a few men from all over the United States who knit hats for the Seattle Mission to Seafarers’ Christmas gift program, the ministry attracts more than 400 volunteers. “I believe if we can inspire 400 people, that is the power of evangelism,” Hawkins said.

Those volunteers “see the world through our eyes of service, humility and humanity,” Hawkins said, who added that part of the ministry’s mission is “to bring ourselves to the rest of humanity and bring our brothers and sisters to these places so they will experience the world and other people in a truly inspiring and wonderful setting.”

And, it might just be “more about the church of the future than most of the structures we have throughout the Episcopal Church,” he said.

The Port of Seattle is one of more than 200 ports in 50 countries where the Mission to Seafarers International ministers. Founded in 1856, the ministry has its roots in the Anglican Church and today Queen Elizabeth II is its patron.