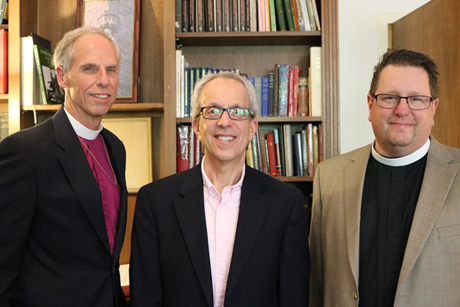 The announcement was made July 25 by Fisher and Canon Tom Callard, the cathedral’s priest-in-charge. In addition to preaching and teaching, Fisher said that Shapiro would “offer his wisdom on a host of social justice concerns.”

Speaking to the masslive.com news website, Shapiro said that the new post “offers me and parishioners of the cathedral an opportunity to explore faith and history in ways we have never done before … I anticipate a unique opportunity to teach and preach as well as see my own tradition from a new very rich perspective.”

Speaking to the same website, Fisher explained the thinking behind the appointment: “Christians and Jews share so much – a common father in Abraham, the Hebrew scriptures, belief in a God who is both transcendent and within us, and a common challenge from the Prophets.

“Jesus was Jewish and constantly quoted the Prophets. Rabbi Mark will expand our understanding of both Judaism and Christianity by his preaching and teaching.”

Shapiro’s journey to the rabbinic ministry began at home in Toronto, Fisher said in a statement. After completing a Bachelor of Arts degree in intellectual history at York University, Shapiro attended the Hebrew Union College in Cincinnati where he was ordained as a rabbi. He earned the Doctor of Divinity degree from the same institution in 2002.