Editor’s note: Bishop Pierre Whalon of the Convocation of Episcopal Churches in Europe issued a statement in French here. 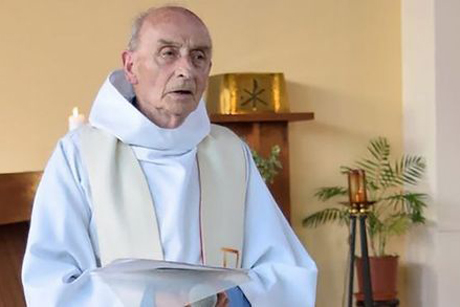 [Anglican Communion News Service] Church leaders have been responding to yesterday’s murder of French Roman Catholic priest Father Jacques Hamel. Hamel was killed by supporters of Daesh as he and a small congregation celebrated Mass at the Church in Saint-Etienne-du-Rouvray in Normandy. The assailants were subsequently shot and killed by French security forces.

Church of England Suffragan Bishop in Europe David Hamid has written to the archbishop of Rouen to express his “deep sorrow” at Hamel’s death and to “extend the assurance of our communion in prayer and love in Christ.”

In his letter, Hamid said: “We Anglicans join other Christians in expressing our solidarity and closeness to the people in your diocese in the face of this brutal attack. We pray for Father Jacques, that the Lord may receive him into his arms of love and grant him eternal rest and peace.

“We pray for the faithful of his parish and of your diocese who are troubled and shocked by this act of violence that took place in the middle of the celebration of the Mass. We pray for the people of France, that they may be comforted by God during this period of insecurity, fear and violence.”

Archbishop of Canterbury Justin Welby issued a joint statement with the other five presidents of the ecumenical group Churches Together in England, including the leader of the Roman Catholic Church in England and Wales, Cardinal Vincent Nichols, the archbishop of Westminster.

In their statement, the church leaders say: “We are deeply saddened to learn of the brutal murder of our brother … That a man of peace who had dedicated his life to serving people could be killed during Mass is testimony to the evil that drives the actions of those who commit such a crime.

“We offer our deepest sympathy to his family, friends and parishioners. We pray for the wellbeing of those who were taken hostage, their families and the entire community served by Fr. Jacques; indeed we pray for the peace of France, Europe, the Middle East and the world for which Jesus, the Prince of Peace, gave his own life.

“We call upon all people of goodwill to pray and work for justice and peace. In particular, we implore everyone to help people everywhere to pursue the path of peace and human flourishing – which is the will of Creator God.”

The general secretary of the Conference of European Churches, Fr. Heikki Huttunen, said that the pan-European ecumenical body received news of the attack “with shock and great distress.”

He said: “Fr. Jacques gave his life while officiating the Holy Eucharist. He was known as a man of reconciliation and dialogue with people of all faiths and none.

“He exemplifies the Christian understanding of martyrdom. Of the victory over the dark powers of violence and death and the eternal perspective created by love and experienced through the eucharistic gathering.”

The acting general secretary of the World Council of Churches, the Rev. Hielke Wolters, said: “We convey our sympathies to the people of France and particularly to the community of Saint-Etienne-du-Rouvray for this latest eruption of violence. We join their grief.

“It is particularly distressing when worshippers and professed religious are singled out, because their lives are put at the service of all. Yet it makes our resolve even stronger to stem violence at its very root by reaching out all the more to all people with an all-encompassing message of peace, justice, and nonviolence.”

This morning, French President François Hollande convened a meeting of the country’s religious leaders in a demonstration of interfaith unity. Afterwards, the Roman Catholic Archbishop of Paris, Cardinal André Vingt-Trois, addressed journalists flanked by leaders of other Christian denominations as well as Jewish, Muslim and Buddhist leaders, the Reuters news agency reported. “We cannot allow ourselves to be dragged into the politics of Daesh which wants to set the children of the same family against each other,” he said.

Yesterday’s attack was one of a continuing series of attacks in mainland Europe that have targeted, in particular, France, Belgium and Germany. This afternoon a suitcase containing what has been described as aerosol cans exploded in the Bavarian city of Zirndorf in southern Germany. A security operation at the scene, near a refugee reception and processing centre, is ongoing. The Bavarian state interior ministry has described the explosion as “small” and said that nobody was injured as a result of the “very small explosion.”