Editor’s note: This is the latest in a continuing series about Episcopal Church congregations that are involved in community agriculture. Other stories in the series can be found here 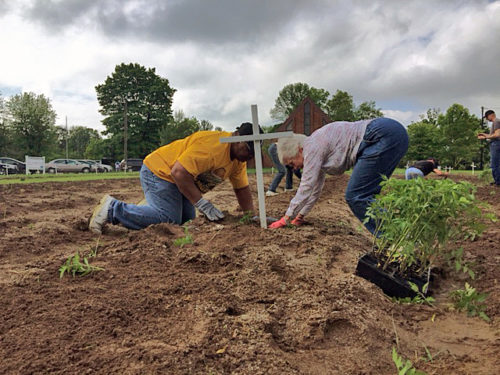 Heading up Emerson Avenue past 46th Street, any passerby – whether nourished or hungry, devout or spiritually unsure, striving to heal or prone to violence – is confronted by a sight both grim and hopeful: Dozens of white crosses stand as a memorial to the dead while surrounded by the bounty of God’s Earth, crops that eventually will provide fresh food for a neighborhood in great need of it.

Each cross planted in the church’s street-side farm field represents one of the city’s murder victims. In some cases, the crosses themselves have become tools of the gardener, supporting strings of peas and taller herbs, like dill. The church’s goal, with the help of a United Thank Offering, or UTO, grant, is to harvest 10,000 pounds of produce from this former baseball field by the end of the growing season and distribute it to several local food pantries. 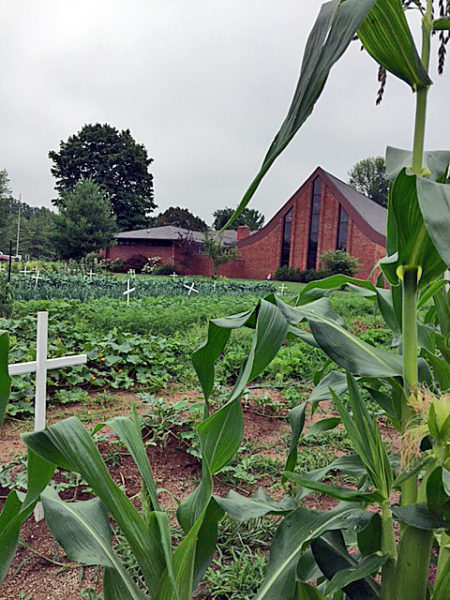 White crosses representing city murder victims are seen in July amid corn and other crops in the farm field outside of St. Alban’s Episcopal Church in Indianapolis. Photo: Mike Scime/St. Alban’s

“So you have this image of resurrection; where you had a barren field that was representative of death, it’s now becoming something that lives … something that is going to benefit the community that has suffered from the murders,” said the Rev. Mike Scime, a deacon at St. Alban’s and co-director of the garden.

The farm program is drawing inquiries from other congregations in Indianapolis and beyond as organizers keep their sights on a long-term goal of improving the nutritional choices and grocery purchasing options of the church’s neighbors.

This ministry has been years in the making, and its name, which invokes a passage from Micah, points to multiple influences and missions: The Swords to Plowshares Peace Garden.

The project intends to show, that with God’s help, the “barrenness caused by violence” can be transformed “into life-giving food” for the church’s poorest neighbors.

Violence was a recurring story in 2014 and again in 2015 in Indianapolis. After more than 130 homicides in 2014, the city set a grim new record last year with 144 homicides, among them the case of a 10-year-old boy killed at a memorial service for a relative and another case involving the discovery of four people dead in a house that had been targeted for a break-in.

St. Alban’s is located on Indianapolis’ east side, where a large number of the murders have occurred. The congregation draws its members from a much larger geographic area, but in the neighborhood around the church, fresh produce is hard to find, said Sarah Archer, a member of St. Alban’s who helped create the Swords to Plowshares initiative.

“Our neighborhood is what is called for lack of a better term a ‘food desert,’ which is defined by the FDA (Food and Drug Administration) as an area where grocery stores are more than a mile away from most of the residences, and so they end up buying all sorts of food at convenience stores, which almost never are able to carry fresh produce,” said Archer, a vestry member who co-directs the project.

In addition to a worthy mission, the church had a key resource: three unused ballfields.

The church’s baseball ministry had ended several years ago, and congregation leaders had long debated what to do with the fields. Planting an orchard would take too long to yield fruit. There also was talk of creating a garden where community members could rent plots, but such a plan would involve administrative challenges.

“We knew that we had to find a different use for that property,” Scime said, and the uptick in violence led to the beginning of a plan. “Some people wanted to do something that would bring to the community’s attention the number of murders.”

A response to the violence was incorporated into the decision by the church take on itself the work of farming the field, and Scime and other church leaders also saw its themes of justice, peace and community aligned with the mission of the Episcopal Church’s UTO grant program. 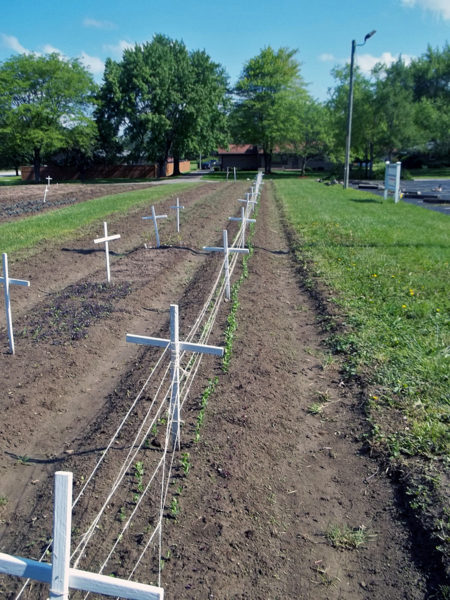 St. Alban’s began laying plans to cultivate one of the half-acre baseball fields. In December 2014, Scime, with Archer’s help, submitted an application for a UTO grant of about $16,000 that, when combined with other grants and donations, would be used to buy equipment, hire a manager and get the farm up and running.

While the church waited last year for a decision on the UTO grant application, melons were planted in about 20 percent of the field to test the soil quality. It proved suitable, and the whole field was tilled to prepare for a full planting the following spring.

After the UTO grant was approved, the church held a ceremony last December to dedicate the Peace Garden. About a hundred people attended, including the city’s police chief and representatives from the church’s food pantry partners.

By then, Indianapolis was well on its way to topping its 1998 record of 143 murders, and the white crosses representing victims killed in 2015 filled the church’s empty field.

“When all the crosses were up at the end of December and one looked across that field of crosses, it was pretty attention-arresting,” said Archer, who works as a public-health nurse.

In the spring, the church used the grant money to hire Tate Nielsen as full-time garden director for the 2016 growing season. He developed a plan for about 20 crops, including tomatoes, lettuce, carrots, onions, squash, melons, corn and beans. The crops themselves became an advertisement for the ministry underway.

“We wanted to make it visually attractive so people would come up and wonder what was going on and really engage with the garden,” Nielsen said.

As of mid-July, 1,200 pounds of fresh produce already had been harvested, much of it lettuce. When the heavier crops are picked later in the season, the farm hopes to hit its goal of 10,000 pounds to donate to local food pantries, he said.

At the same time, the farm has drawn support from many corners, with 43 volunteers putting in a total of more than 320 hours to get the food from seed to table.

The church already is planning for next year. It took about $25,000 to launch the farm, but the annual cost is estimated at $15,000 – Nielsen’s job is only temporary, and the garden is expected to continue next year with only a part-time manager. Before deciding what will be planted next year, more than 100 food pantry clients are being interviewed to determine what types of produce they prefer, Archer said.

Further in the future, the church hopes to work with other local organizations to encourage more food companies to open grocery stores in this and other Indianapolis neighborhoods to address the problem of food deserts.

In the meantime, the violence has continued in 2016 – “There are 71 crosses in our garden,” Scime said one Monday morning this month – though Indianapolis is not on pace to match last year’s record death toll. In the face of such violence, St. Alban’s hopes to be a “beacon of light,” Scime said, as it moves forward with its farm ministry.

It couldn’t have happened without the UTO program’s support, Scime said. “We have a strong commitment and belief that their initial investment here will result in something that continues on into the future.”