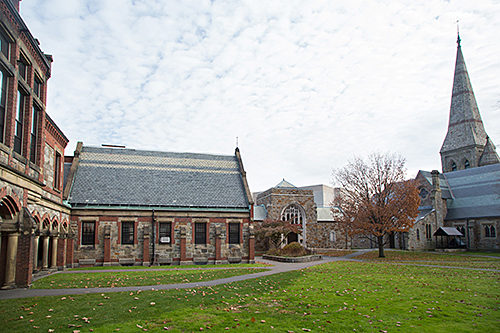 [Episcopal Divinity School press release] Episcopal Divinity School will cease to grant degrees at the end of the upcoming academic year, the seminary’s board of trustees decided July 21 on a 11-4 vote. During the next year, the board will explore options for EDS’s future, some of which were suggested by a specially convened Futures Task Force to make plans for EDS’s future.

“A school that has taken on racism, sexism, heterosexism, and multiple interlocking oppressions is now called to rethink its delivery of theological education in a new and changing world,” said the Very Rev. Gary Hall ’76, chairman of the board, in introducing the resolution. “Ending unsustainable spending is a matter of social justice.”

The options suggested to the task force include merging with another theological seminary, establishing a center for Abrahamic studies, becoming a center for continuing education, fostering lay ministry, and using the seminary’s assets to fund scholarships for seminarians devoted to working on issues of peace and justice.

“It is clear to us that if EDS’s special commitment to working for social justice and the full inclusion of all of God’s people in our common life is to endure, we need to act quickly while the seminary still has sufficient assets to bring to bear in the next phase of its life,” Hall said. “In fact, our commitment to just compensation for all involved was a prime impetus for acting now. Today we have adequate resources for student, faculty, and staff transitions. Given current financial trajectories, five years down the road we would not. We can do it right if we do it now.”

No faculty or staff members will be laid off during the upcoming academic year, and all students, including EDS’s final incoming class, which arrives on campus next month, will be “taught out,” Hall said. “This means that we will contract with another seminary or seminaries to accept our students at full credit and we will make sure that students do not bear the expense of this transition.”

Bonnie Anderson, vice chair of the board and former president of the Episcopal Church’s House of Deputies, characterized the vote as “a sad but hopeful moment.”

“We understand that people will grieve this decision,” said Anderson who received an honorary doctorate from EDS in 2006. “It is the end of a significant phase in the life of a significant institution that has made incredible contributions to the life of our church. But by choosing this course now, we are in a much stronger position to ensure EDS’s legacy.”

EDS, which was formed in 1974, through the merger of the Cambridge-based Episcopal Theological School and the Philadelphia Divinity School, is one of the smallest of the 10 accredited seminaries of the Episcopal Church, and had long faced financial challenges that were depleting its endowment.

“The school is weakened each day by its ongoing deficit — the future mission of the school is losing about $4,380 per day, or $133,000 per month,” wrote Anthony Ruger, former senior research fellow at the Center for the Study of Theological Education at Auburn Theological Seminary in a report to the board in May. “The intermediate and long term viability of EDS as a quality accredited institution is genuinely threatened. The trustees have both the fiduciary and moral responsibility to see that EDS’s mission is perpetuated, sustained, and strengthened.”

EDS’s investments are currently valued at approximately $53 million plus its campus. More than half of the endowment is restricted.

Ruger, an expert on financial sustainability in theological schools, presented numerous models to the board suggesting that even unusual increases in enrollment and fundraising coupled with significant budget cuts were unlikely to provide a long-term solution to EDS’s financial problems, leaving the seminary in a gradually worsening position to find new partners or begin new initiatives.

“We believe there are new, bold and innovative ways for us to forward God’s mission in this new day and context,” Hall said. “We also believe that living into those new opportunities requires that we stop doing some unsustainable things now.”

Debate at the meeting was intense, with Pamela Conrad, the student representative, and the Rev. Joan M. Martin, the faculty representative, who have voice, but not vote on the board, pressing the trustees to adopt a longer timeline in making its decision and to provide more details about the possible shape of the ongoing discernment process.

“Justice is never for sale. And justice always operates at a deficit,” Conrad said.

Dennis Stark, the board’s treasurer, said he “enthusiastically” supported the resolution. “We are spending six million a year from our endowment, and 30 percent of that is above a reasonable amount,” Stark said.

The Rev. Frank Fornaro ‘96, interim dean and president of EDS, announced after the vote that he would resign in mid-November. “I totally disagree with this resolution,” he said.

Hall said the board would have the details of its teach-out and faculty compensation plans completed no later than the first day of classes, Sept. 7.