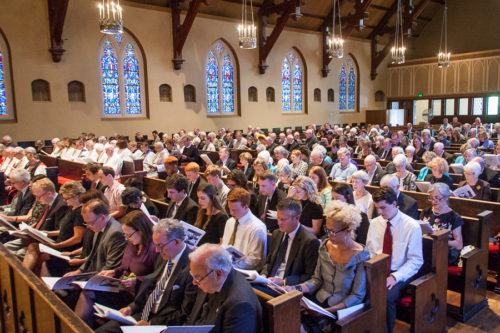 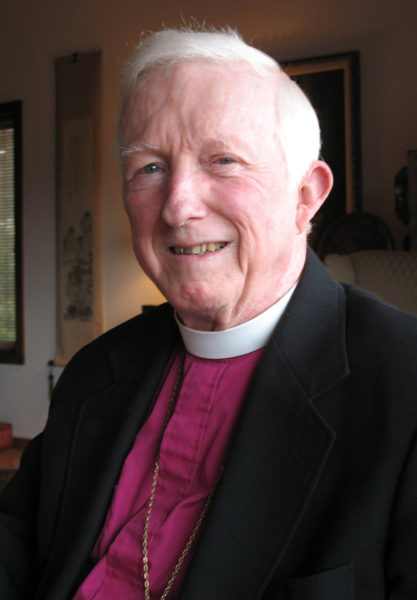 Browning died on July 11 at the age of 87. He lived in Hood River, Oregon.

A funeral liturgy was held July 17 at St. Mark’s Episcopal Church, Hood River, and another service is planned at Cathedral of St. Andrew in Honolulu, Hawaii.

Leaders in the Episcopal Church traveled from around the country to join in celebration of a life that brought profound change to the church and the world. The Rt. Rev. Frank T. Griswold, 25th presiding bishop, delivered the homily. Griswold described Browning’s death day as his “birth day” – into eternity. The Rt. Rev. Katharine Jefferts Schori, 26th presiding bishop, led the post-communion prayer. Current Presiding Bishop Michael B. Curry closed the service with a resounding blessing of the people. 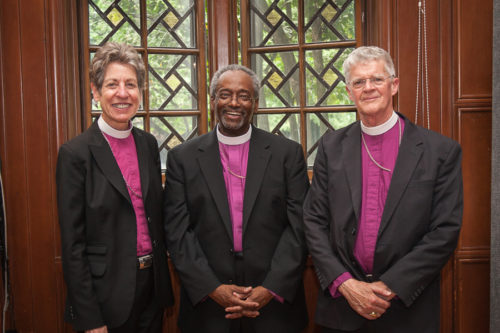 The Rev. Gay Clark Jennings, current president of the church’s House of Deputies, and Bonnie Anderson, her predecessor, also participated in the service.

The Rev. Curtis Almquist, SSJE, described Browning in terms of the kindness, joy and humility he brought to every task.

The Rev. Brian Grieves, a colleague of Browning’s, read a statement from Cape Town Archbishop Emeritus Desmond Tutu. “Whether he was advocating for women, lay people, people of color or gays and lesbians and others to be fully included in the life of the church, he became a conscience for justice that you are still building on now,” Tutu said.  “Keep on with the journey.  And should you forget, Patti (Browning’s wife) will remind you.”

Browning visited South Africa “during our darkest days and gave us encouragement and hope,” he said. “He fiercely challenged U.S. politicians and corporations to bring an end to the evil of apartheid.”

Tutu recalled that Browning also stood against “another apartheid – the injustice of the occupation of 4 million Palestinians.”

To the remembrances of colleagues were added that of Browning’s oldest son, the Hon. R. Mark Browning, judge of the first circuit court of Oahu, Hawaii. He recounted his own upbringing and the role of his strong mother, Patti Browning, in opening their home and table to all. His parents’ marriage was a “magnificent love story,” he said. The couple raised five children during a career that included time in Okinawa, Texas, Hawaii and Europe. The Browning grandchildren led the congregation in prayer.

Browning leaves a legacy of opening the church, making it a place where “there will be no outcasts,” in his words. Known for taking theologically liberal stances, he fought institutional racism and other forms of injustice. Browning worked for full inclusion of LGBT people in the life of the church. He had a place in other important milestones. For example, in 1989 he consecrated the Rev. Barbara Harris of the Diocese of Massachusetts as the first female bishop in the Episcopal Church and in the Anglican Communion. 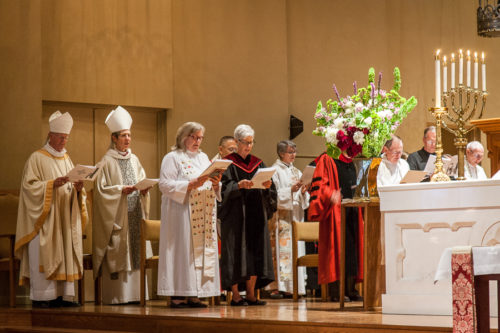 Browning was ordained as a deacon on July 2, 1954, and as a priest on May 23, 1955. He was the 6th bishop of Hawaii and was elected presiding bishop at the 68th General Convention in Anaheim, California, in September 1985 and served for 12 years.

The service for Browning gave those in attendance a sense of his deep love for family, his open heart, and his unflagging struggle for justice and inclusion. At his installation sermon in 1986, he invoked the spirit of activism and hope: “Let us live out a mission that seeks to rescue the world from its present peril, to save those drowning in a raging river of despair, to rescue those caught in a wasteland of hopelessness. Let us commit ourselves to give the waters of baptism to those who thirst for justice.”

Previous ENS coverage of Browning’s death and the other tributes made to him can be found here.