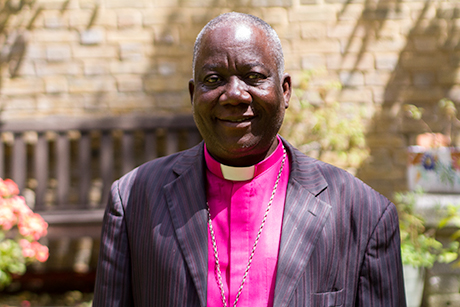 [Anglican Communion News Service] Bishop of Angola Andre Soares has warned that his country’s economy has taken a huge hit because of the collapse in the price of oil. He says basic essentials are no longer available. Speaking at Chatham House – the renowned international affairs think tank – during a visit to the U.K., he gave an example of going to hospital and finding there were no syringes available for a malaria test. He said this was exceptionally serious because of the rise in deaths from malaria and yellow fever.

Soares told the audience in London that wealth from Angola’s oil income had not been shared, resulting in acute inequality. Corruption was clear and came from the top down, he explained. But the bishop cautioned against confrontation – and praised the church for building relationships with the government. He said that unlike NGOs, the church was present in every community. It was committed to the long-term and the government listened to it.

Soren Kirk Jensen, an associate fellow at Chatham House, complimented the church on its role in relief and development but said it should not forget the difficult task of holding governments to account.

The meeting was chaired by the philanthropist Christopher Flowers of the Flowers Foundation. Soares thanked Flowers for his investment in Angola, especially in the fight against malaria.

Earlier, in an interview with ACNS, Soares spoke of his concern about the political situation in Angola. The current president, Jose Eduardo Dos Santos, has been in power since 1979 and has said he will step down in 2018 but elections are due before that.

“There is concern about the handover of power,” said Soares. “The president is losing support within his party and across the country.”

He said church leaders could be influential in maintaining peace and he urged the Anglican Communion around the world to pray for his country.

“We need your prayers. Our country has been suffering . . . after 27 years of civil war. Now we are learning how to live together . . . we are starting [to] build the country . . . we ask that people across the world can continue to pray for us that the Holy Spirit can transform the mind of all Angolan people, especially our political leaders, to see that they come together to develop democracy . . . and also to see people can be [free to] decide what they want to do as a country, as a nation, as people.”

Soares spoke with enthusiasm about the state of the Anglican Church within Angola.

“We have many challenges to lay a good foundation for the diocese,” he said. “We are still a missionary diocese [within the Anglican Church of Southern Africa] but the Church is growing – because we are praying.”

He said about 57,000 adults attended Anglican churches in Angola; most of them aged 18 to 36. More than 100,000 babies had been baptized. The church is keen to build schools, particularly high schools and has ambitions to build an Anglican university to cope with the overwhelming demand. It is also developing theological training for clergy which the bishop described as “key” for the church’s future.

Soares is in the U.K. for two weeks. He is preaching at St. Paul’s Cathedral at a service to mark the 15th anniversary of Alma – the Angola London Mozambique Association – which links the dioceses of London and Angola. He is also visiting Manna – the Mozambique and Angola Anglican Association.