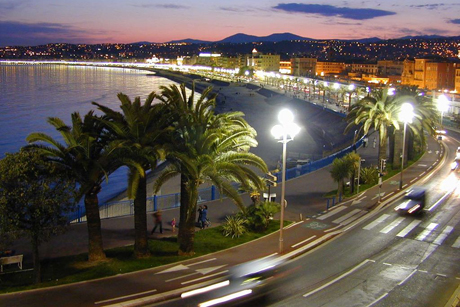 The Promenade des Anglais in Nice on the south coast of France, pictured here in 2004, was the scene of a deadly terrorist attack last night in which at least 84 people have been killed. Photo: W M Connolley / Wikimedia

[Anglican Communion News Service] Bishops responsible for European churches for the US-based Episcopal Church and the Church of England have urged people to pray following last night’s terrorist attacks in Nice. The call to prayer came as it emerged that the Anglican priest who serves as chaplain in Nice was working in New York at the time of the 9/11 attacks and in London during two bombings on the Underground train service.

At least 84 people were killed when a lorry being driven by a French-Tunisian national, identified by French media as Mohamed Lahouaiej Bouhlel, was driven into crowds on the Promenade des Anglais as they celebrated Bastille Day – France’s national holiday. French government officials say that there are many children among the dead. Many more people were injured in the attack – 50 of them are said to be in a critical condition in hospital.

The identities of the dead are still being confirmed. Already it is known that a 60-year-old French man, a 51-year-old American man and his 11-year-old son; a 54-year-old Swiss women, a Russian and two Armenians are amongst the dead.

The Promenade des Anglais, where the attack took place, was built in the 19th Century by the Revd Lewis Way, the Anglican chaplain in Nice who raised the funds to build it to provide work for unemployed locals. The 7 km walkway extends from the airport to the Quai des États-Unisand is a popular destination for tourists and the site of special events across the Bay of Angels on the Mediterranean.

“This morning the city of Nice and the nation of France is in mourning, once again, this time for the victims of the horrific attack on thePromenade des Anglais in Nice,” the Suffragan Bishop of the Church of England’s Diocese in Europe, Dr David Hamid, wrote on his blog.

“The Promenade is just a couple of hundred metres from our Church of the Holy Trinity. I spoke to the Revd Peter Jackson, the Chaplain this morning.

“Like so many, Father Peter is in shock at these events. Last night he was enjoying the national festival, and attended a reception with the Mayor and Prefect, a warm family occasion. At the reception, ironically, honour and tribute was being paid to the those who work for the emergency services in the city. On return to the presbytery, he learned of the attacks close by. One Churchwarden narrowly escaped injury.

“There are certain to be many in our community who will be personally affected by this tragedy, and we pray for Father Peter and all who minister and care for the survivors.”

Bishop Pierre Whalon of the Convocation of Episcopal Churches in Europe, part of the US-based Episcopal Church, explained that the Episcopal and Anglican congregations in Nice merged in 1971, when the Holy Spirit Episcopal Church was sold to the French Reformed Church.

“Over the years, I have visited [the church in Nice] several times as Bishop to confirm and receive people,” he said. “There are still some Episcopalians, and some are buried in the churchyard. Melinda and I await still to hear that all our friends in Nice are safe. The horror of this 14th of July touches us therefore even more personally.

“I am happy to report that the Revd Peter Jackson and parishioners returned home safely last night. This morning will be very hard. They need our prayers as they minister the love of God to their stricken city. And let us pray for the dead and dying, the wounded and all who care for them, the police who had to kill the terrorist and face the horror he had created, and him too. And finally, pray and work for justice, that we might have peace.”

The Anglican chaplain of nearby St Michael’s Church in Beaulieu-sur-Mer, Father Anthony Ingham, described the attack as a “terrible cowardly and evil act.”

In an interview with the UK’s Premier Christian Radio, Father Anthony urged people to respond to the attack in prayer; and said it was important for people to pray individually before they could take part in corporate prayer during church services.

“Prayer is the thing,” he said. “We can’t do anything tangible or practical in support of the security service apart from our own vigilance [and] our own contribution to safety. But apart from that we do have a very strong and very powerful thing that we can do and that is prayer – prayer for those who have died so suddenly [and] prayer for the families in particular – because with faith we trust in God’s love and mercy for those who have died but for the families left behind this is a most terrible time from which many may not recover.”

The hymn writer Henry F Lyte, author of the hymn Abide with me, is buried in the churchyard at Holy Trinity, Nice. Bishop David drew comfort from the hymn’s words:

I fear no foe, with Thee at hand to bless;
Ills have no weight, and tears no bitterness;
Where is death’s sting? Where, grave, thy victory?
I triumph still, if Thou abide with me.

Hold Thou Thy cross before my closing eyes;
Shine through the gloom and point me to the skies;
Heav’n’s morning breaks, and earth’s vain shadows flee;
In life, in death, O Lord, abide with me.

Bishops David and Pierre offered prayers for people to use:

God of infinite mercy, we pray for the victims of the Nice attack.
Remember them according to the favour you bear for your people.
Comfort those who mourn and give strength to the injured.
Deliver those whose hearts are hardened by hatred.
Grant to us all your understanding, and your persevering love, for your mercy’s sake.

I remain confident of this:
I will see the goodness of the Lord
in the land of the living.
Wait for the Lord;
be strong and take heart
and wait for the Lord. (Psalm 27:1, 13-14)

A Collect for Peace

O God, the author of peace and lover of concord,
to know you is eternal life and to serve you is perfect freedom:
Defend us, your humble servants, in all assaults of our enemies;
that we, surely trusting in your defence, may not fear the power of any adversaries;
through the might of Jesus Christ our Lord.
Amen.

By your Cross, Lord Jesus, you became our only true and lasting hope.

We ask that you give rest to those who died in Nice, and that you heal the wounded and bless those who care for them.
You comforted Martha and Mary; comfort all who mourn.
Give us who remain stout hearts to face the days ahead.
And roll down your justice upon us all, that we might have peace.
We ask this because in your love you died for us, and rose again, that we might have life with you forever.
Amen.