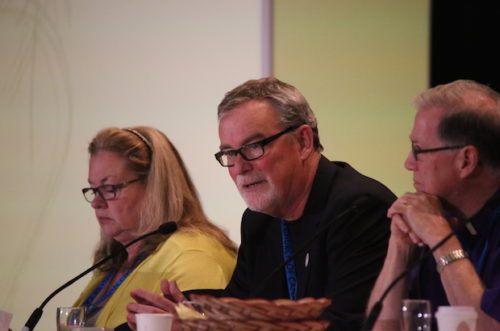 So how did the error occur?

Incorrect information sent to Data-on-the Spot, the electronic voting services provider contracted to manage the voting by clickers, led to the mistake, according to Archdeacon Michael Thompson, general secretary.

The vote to change the marriage canon (church law) to allow the solemnization of same-sex marriages required a two-thirds majority in each of the Orders of Laity, Clergy and Bishops, but the original count of the vote on the night of July 11 showed the motion had failed to pass by one vote in the Order of Clergy.

“This was an error that took place in my office,” Thompson said in an interview with the Anglican Journal. “It is not an error that was caused by the electronic voting. It is a mistake that we made…[Data-on-the Spot] simply took the information that we gave them and accurately coded it into their electronic system.”

The issue of Jones’s and Thompson’s voting privileges was brought to light the day before synod began, said J.P. Copeland, integration specialist for Data-on-the-Spot (DOTS), the electronic voting services provider contracted by General Synod to manage the voting by clickers. When Thompson was manually added to the list of voting members, however, he was wrongly coded as a layperson, instead of as a member of the Order of Clergy—a fact that was discovered only after a printed list of how General Synod members had voted was examined.

“It was literally like a hand addition that was communicated to me,” Copeland told the Anglican Journal,speaking of the request to have Thompson added to the voting list. “I don’t have a record of where it came from, who told me what, or whether I heard improperly or whether I read it improperly.”

Thompson said that once General Synod members noted the apparent discrepancy between the vote as it was announced Monday night and the numbers that were made available the next day identifying how members had voted, it was Copeland who first realized the nature of the error.

“The people who helped us most know the nature of the error that had taken place was Data-on-the-Spot,” said Thompson.

Prior to the vote it was requested that the names and votes of each member be made public in the minutes. (For this to happen, three members of synod must make the request before the vote takes place.)

A motion was then brought Tuesday afternoon, July 12, requesting that the information be made available to synod members before the end of the 41st session of General Synod—rather than wait for publication of the minutes, which requires a few weeks—so that members could check their own votes.

The motion was moved by Canon Kevin Robertson and seconded by Canon David Harrison, both of the diocese of Toronto.

Harrison had approached the floor earlier on Tuesday asking if the publication of the voting data could be expedited, but was told it would not be available until the minutes were. He had spoken on the same point following further confusion with voting in the afternoon, to no avail.

Finally, he asked his fellow diocesan member, Robertson, if he would be willing to join him in bringing a motion asking for the information to be provided.

“We figured it was a public list, it was not a secret ballot, and if we weren’t using clickers and we were voting in the old way, people would know in the moment who was voting and how,” Robertson said in an interview with the Anglican Journal.

Harrison said that given the issues with technology that were seen on Tuesday, he simply wanted clarity on the issue.

“Given that it was a matter of one vote…I thought it was appropriate to have people have the chance to see the numbers to confirm their votes were counted, and that is what happened,” Harrison said in a separate interview.

Once the motion passed and the list was made available, several groups of members independently examined the numbers, and found that while the Monday night vote had recorded 51 of 77 clergy in favour of changing the marriage canon, according to the list that had been published, 52 of 78 had voted in favour—enough to push the vote over the two-thirds threshold. 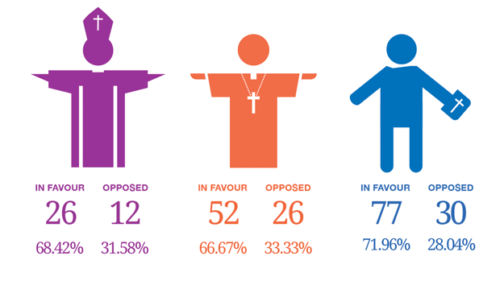 Thompson confirmed that if the decision had not been made to record the identities of the voters, the error would never have been caught.

But concerns about the integrity of other parts of the process were also raised on Tuesday. Three members—Archdeacon Pierre Voyer, the Rev. Danny Whitehead and Ruth Sheeran—told the house that while they had voted in favour of the motion on Monday night, they were not recorded as having done so.

These concerns were not addressed by synod, because immediately after they were brought forward, it was discovered that Thompson’s vote was enough to swing the decision.

“There didn’t seem to be a will on the part of the house to pursue that, since the discovery of my missing ballot had made that less vital—it wasn’t going to change the outcome [of the vote],” Thompson said, when asked why the three concerns raised were not dealt with by synod.

Thompson added that while he did not know why those votes were not recorded, there are many possible explanations, one being that they were a result of mistakes made by the voters themselves.

Copeland, who said he has conducted hundreds of electronic elections, agreed, cautioning that there is always room for human error in electronic voting.

“It’s hard to say why their vote wasn’t recorded,” he said, noting that there are a number of possible explanations, such as pressing the wrong number or voting too late. “I am supremely confident in the system itself…the most likely scenario is that although they think they voted, for one reason or another, they didn’t.”

Thompson does not believe this should bring into question other decisions made by the 41st General Synod.

“While some people may have made a mistake and done the electronic equivalent of a spoiled ballot, I don’t think there is any doubt on the integrity of the process,” he said.

Copeland agreed, noting that following the discovery of the error, he revisited another close vote that had taken place earlier in the day and ascertained that Thompson’s vote would not have influenced it either way.

“[The marriage canon vote] literally was the only vote that was close enough to be compromised by the miscategorization,” Copeland said.

Thompson said the church will need to think through how best to approach voting at future synods, and while he was reluctant to comment on what exactly that will look like, he said many people are “highly motivated” to ensure maximum accuracy.

“We are going to look at all the things we learned from this synod, and make improvements in the way we conduct business in the next one,” he said.

Copeland said there are several technological options available to make sure that voters have as much confidence as possible that their votes are being recorded accurately, including screens that will show when each member has voted.