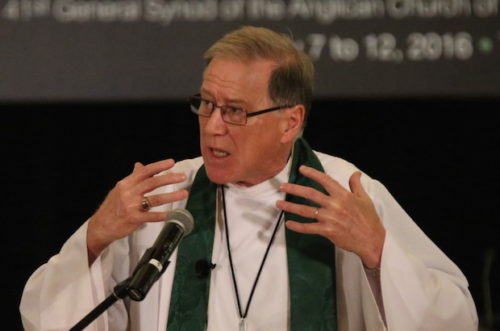 Archbishop Fred Hiltz, primate of the Anglican Church of Canada, at the closing worship of General Synod 2016. Photo: Art Babych

[Anglican Journal] Archbishop Fred Hiltz, primate of the Anglican Church of Canada, is asking Canadian Anglicans to display humility and love for one another in the wake of the divisive vote on same-sex marriage.

Hiltz says he prays that the church not be riven, but that Canadian Anglicans strive for the “unity of the Spirit in the bond of peace” mentioned by St. Paul. “More than ever we must make efforts not to turn away from one another but rather to one another, not to ignore but to recognize one another, not to walk apart but together,” the primate says. “We need as a church to work hard at maintaining our communion in Christ, for in his reconciling love is our hope and our life.”

In a statement released Thursday, July 14, Hiltz says that in light of Monday’s apparent decision and its reversal Tuesday, he prayed the church would take seriously a plea made by St. Paul in his letter to the Ephesians: “I beg you to lead a life worthy of the calling to which you have been called, with all lowliness and meekness, with patience, forbearing one another in love, eager to maintain the unity of the Spirit in the bond of peace.” (Ephesians 4:1-3)

Of the results announced Monday, seemingly the rejection of a resolution to allow same-sex marriages, Hiltz says, “The pastoral implication was that LGBTQ2S persons and those who have accompanied them were disappointed and saddened. Many wept. The synod sat in silence.”

The primate then relates how a resolution was subsequently passed to make the results public, whereupon it was revealed that one vote did not end up being recorded as falling in the Order of Clergy — a pivotal discovery, since the vote had initially appeared to fail only in that order, and by only a fraction of a percentage point. When he announced the resolution had in fact passed its first reading, the primate says, “The pastoral implication was that a number of members of synod were disappointed and saddened. Many wept. The synod sat in silence.”

Hiltz notes that the issue has “deeply divided” the church for a long time, and that the division remains despite the vote. “In the midst of this division, I need to take to heart Paul’s counsel and I encourage our whole church to do the same,” he says. Paul, the primate says, also reminds us that as Christians we are “the Body of Christ, members one of another,” and that, in Hiltz’s words, “we in fact need each other, and need to find ways to make room for one another.”

Canadian Anglicans, he says, must now ask themselves, “For what kind of pastoral and prophetic witness can and will we be known?”

Hiltz also notes that, while the resolution to change the marriage canon will be before the next General Synod, in 2019, in the meantime it is to be considered by diocesan and provincial synods.

The primate also says he commends a resolution passed by General Synod Tuesday morning that reaffirms the 2004 General Synod statement on the integrity and sanctity of same-sex relationships and also calls on the church to “engage fully…at every level” with “This Holy Estate,” the report of the commission on same-sex marriage.

“I call the church to seize this opportunity,” the primate says, adding that he will ask the Council of General Synod (CoGS) to look into translating at least its executive summary and frequently asked questions, and consider “what other resources might be helpful” for Canadian Anglicans pondering the issue. He will also, Hiltz says, ask the bishops to consider how the church might encourage members to engage more with the matter, and ask them also to “show strong leadership in their dioceses in hosting events, dialogues, and studies.”

Hiltz says he wants to encourage members of the church to engage much more with LGBTQ2S [Lesbian, Gay, Bisexual, Transgender, Queer/Questioning, Two-Spirited] people. “We have spent a lot of time talking about them. I believe we need to take much more time to talk with them and to learn of their lived experience of covenanted love in relationships that are monogamous and life-long,” Hiltz says. “I know that will require of all of us a good deal of courage and grace.”

Hiltz’s statement concludes with a request that Canadian Anglicans pray for one another with Paul’s words to the Ephesians in mind.