[Episcopal News Service –Seattle, Washington] The traffic might be flowing along Interstate 5 and seaplanes might be droning over Lake Union below St. Mark’s Cathedral, but when Carolyn White comes to the church’s kitchen garden the noise seems to drop away.

She knows it sounds funny to say but, despite the bustle of urban Seattle below, working in the garden “really is a quiet time for some silent meditation and prayer – habits that I need to grow each day, if I can be truthful,” White said on a recent late Sunday morning as she watered the plants.

“I find God in the life-giving process that each seed produces here and then the cycle uplift, growth, harvest, decline and renewal again,” she said. “And I also find God in how what happens here feeds other people who are his.”

The 50-by-10-foot garden grows between the driveway behind the west side of the cathedral and the point at which St. Mark’s property falls away into the greenbelt below. Its produce helps feed the 30 women who sleep in Noel House Shelter, set up in the cathedral parish hall Sunday through Thursday.

The quietness of the garden is, for White, a gift to people who live in cities. “We’re losing spaces where we can connect into the natural world and its cycles,” she said.

“Community agriculture is just one way that we as a congregation – a people of faith – can come together to be the stewards of creation that we are called to be,” said the Very Rev. Steven L. Thomason, who has been cathedral dean and rector nearly four years. Not only do the kitchen garden and a budding urban garden help support the cathedral’s ministries, they also are examples for the cathedral’s commitment to eco-justice and sustainability, he added.

“God is the motivation for us to say: ‘God looked at all of creation and called it good,’ and far be it for us to say anything else and to really take that claim seriously – that in the goodness of creation we come together as a part of that creation to God’s glory and to the benefit of those we serve,” he said.

White and the rest of the St. Mark’s members are not alone in finding God and mission in a church garden. From Ishpeming in Michigan to El Cajon in California, from Snohomish in Washington state to Oyster Bay in New York, a growing number of Episcopalians are returning to the earth to nourish their ministry and their communities. There are tiny gardens and some so large they grow over an imaginary line into farms. There are hydroponic gardens and sophisticated composting systems. 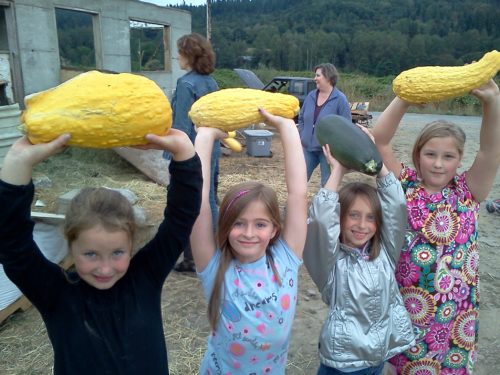 There are large-scale projects such as Seeds of Hope and the Abundant Table, both ministries in the Diocese of Los Angeles. And there are smaller efforts. A few raised beds on a strip of lawn alongside a parking lot, for instance, or parishioners nurturing plant starts in the middle of winter and donating them to a food bank that gave them to clients with instructions on how to start a container garden.

“Everyone can do something … We’re not solving the food crisis around the world by any stretch, but you have to add another straw on the camel’s back,” according to Brian Sellers-Petersen, senior advisor to the president of Episcopal Relief & Development and a champion of church-community agriculture.

When a church starts a garden on its land, “it adds an additional Sunday school classroom,” said Sellers-Petersen. “Everything you need to know about God and Christianity you can learn in a garden.” There are lessons about stewardship, creation, care, death and resurrection.

“I’m always in awe of putting a seed in the ground, something that is seemingly dead that becomes something huge,” he said.

Gardening “brings us into solidarity with people around the world who depend on kitchen gardens” in a way that Americans do not, he said. “It helps us understand the global food systems if we take the opportunity.”

Episcopal Relief & Development’s Abundant Life Garden Project – an interactive, Scripture-based children’s program for parishes, teachers, families and others that was developed for those who seek to share the ministry and work of Episcopal Relief & Development with elementary school-aged students – is a good tool for teaching those larger lessons, as well, Sellers-Petersen said.

In addition, churches, he says, can help people living in “food deserts” by finding ways to ensure they “have access to fresh food that they can’t afford to buy at Whole Foods or they just don’t have the time or the wherewithal to take the bus and transfer to get food at a grocery store because there’s nothing in their neighborhood.”

The Episcopal Church Asset Map shows 189 congregations, schools and organizations that include “community gardens” among their programs. That list in fact may be just a sampling of the Episcopal entities that have gardens on their properties and in their lives. 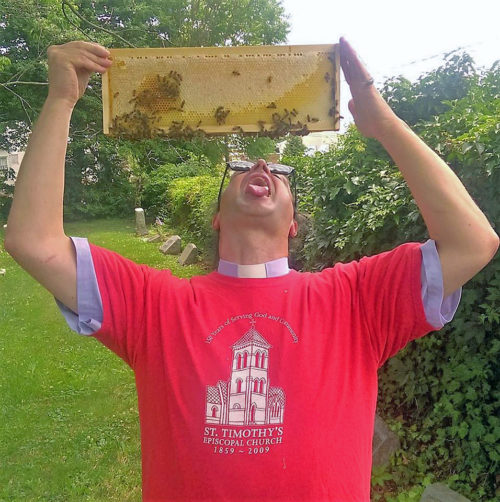 The Rev. Kirk T. Berlenbach, rector and apiarist of St. Timothy’s Episcopal Church in the Roxbourgh section of Philadelphia, waits for honey to drip from a beehive frame. Photo: Episcopal Beekeepers via Facebook

Sellers-Petersen suspects that there are a lot of church gardens that aren’t recorded anywhere. When he first started keeping track of such growth operations, he built a list through word of mouth and personal awareness via “a pile of scraps of paper on my desk and business cards.”

One concentration of church-community agriculture projects is growing in the greater Seattle area of the Diocese of Olympia where Sellers-Petersen lives. St. Mark’s Cathedral, with its two gardens and 20,000 bees that recently took up residence in two hives on the cathedral roof (Sellers-Petersen is the budding cathedral apiarist who says the bees perform “tiny miracles” as they create honey), is but one example.

In the coming weeks, Episcopal News Service will profile some of the Seattle-area community-church agriculture efforts.

* Check out the Episcopal Faith, Food and Farm Network’s Facebook page here for more examples of Episcopal congregations and other organizations involved in church-community agriculture.

* The Faith Farm & Food Network, part of the Beecken Center of The School of Theology at The University of the South, was formed in part with Sellers-Petersen’s help to bring together Episcopalians who grow and share food.

* Churchwork is a blog dedicated to “church data and strategy, Christian formation, and creation care with an emphasis on faith and food.” The Rev. Nurya Love Parish, an associate priest at St. Andrew’s Episcopal Church in Grand Rapids, Michigan, offers a section on the Christian food movement that includes a downloadable guide in exchange for a first name and an email address.

— The Rev. Mary Frances Schjonberg is an editor and reporter for the Episcopal News Service.