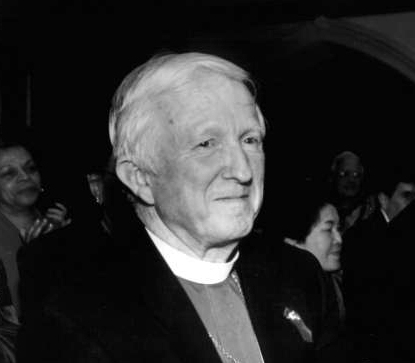 [Episcopal News Service] Tributes from around the world, following the news of former Presiding Bishop Edmond Lee Browning’s death on July 11, expressed an overwhelming sense of loss for a leader who had the courage, strength and conviction to make the Episcopal Church a place where, in his words, “there will be no outcasts.”

“Bishop Browning widened the doors of the Episcopal Church, inviting in an array of people who had previously felt left out,” said the Rev. Canon Brian Grieves, former director of peace and justice ministries for the Episcopal Church, who served on the staff of three presiding bishops, including Browning.

“Motivated by compassion, he set the Episcopal Church on a course that would allow gay men and lesbians to come out of the closet and serve openly in the church,” Grieves told ENS from his home in Hawaii, where Browning had served as diocesan bishop before becoming presiding bishop.

At his first press conference after his election as presiding bishop in September 1985, Browning was asked about a General Convention resolution that was clearly intended to prevent gay people from being ordained, Grieves recalled. “He responded by saying he didn’t think the church should legislate against people.”

In 1988, at his first General Convention as presiding bishop, he welcomed a display of the AIDS quilt, and challenged all the bishops to develop a personal relationship with someone living with AIDS, which he modeled himself.  “Until then, people with AIDS had largely been shunned and ignored,” Grieves said.

Bruce Garner, president of the LGBT advocacy group Integrity USA and a former Executive Council member from the Diocese of Atlanta, said that the Episcopal Church has lost one of its giants.

During the early 1990s, when Garner served a previous term as president of Integrity, he recalled meeting with Browning and celebrated the openness with which he engaged the issues of full inclusion for LBGT people in the life of the church.

“I would become the first president of Integrity to meet with a presiding bishop. I was a little nervous, but I need not have been. Bishop Browning embraced me with his loving aura and sat with me on a sofa in his office as we talked,” he said. “Another first and an expression of his vision of no outcasts was his acceptance to be our speaker and guest at our next Integrity convention. When he stated from the pulpit … that he really didn’t care what the press thought, we got a glimpse of his ardent support for us and his refusal for us to be outcast by the church.”

Archbishop Francisco de Assis da Silva, primate of the Episcopal Anglican Church of Brazil, said that Browning left “a precious theological-pastoral legacy to the Anglican Communion by safely leading the church beyond borders of so many taboo and challenging issues. In a practical and generous way he has built up bridges with sister churches, in an effective gesture of what has been called ‘Partners in Mission.’”

Da Silva said he was grateful to Browning for bringing their two provinces – which had historical relations dating back to 1890 – even closer, especially following the hardships the Episcopal Anglican Church of Brazil experienced since it was granted autonomy from the Episcopal Church in 1965.

“Bishop Browning and former [Brazilian] Primate Dom Olavo Ventura Luiz started a new movement in relations between our churches, which for some time had been asleep, and mother and daughter church rebuilt their affective and historical relations,” said da Silva. “We want to express our gratitude for the life and ministry of Bishop Edmond Browning, who was truly a ‘Shepherd of Sheep,’ encouraging and supporting all people baptized in their ministries and gifts!”

Browning was installed as presiding bishop a few months before Desmond Tutu was elected archbishop of Cape Town and retired the year after Tutu did.“I could not have wished for a more supportive friend – both personally and of our church – at the height of our struggle against apartheid,” said Tutu.“He and Patti witnessed for justice everywhere, whether in South Africa, Palestine, Central America or beyond. I had the privilege of travelling with him, Michael Peers of Canada and Orland Lindsay of the West Indies to Nicaragua and Panama at difficult times for those countries and for their relations with the U.S. He spoke out for justice, peace and democracy superbly and courageously.

“I owe so much to so many, not least to dear Ed and Patti. May Ed rest in peace and rise in glory.”

Browning made history by consecrating the Rev. Barbara Harris of the Diocese of Massachusetts as the first female bishop in the Episcopal Church and in the Anglican Communion.

“The night before he laid hands on Barbara Harris’s head and ordained her the first female bishop, he moved an assembly by saying ‘these hands are ready’!” recalled Grieves.

Browning will also be remembered for awakening the Episcopal Church to the injustice of Israel’s occupation of the Palestinian people, a cause his wife Patti also embraced with annual visits to the Holy Land, Grieves said.

Each of the three presiding bishops who succeeded Browning – Bishops Frank Griswold, Katharine Jefferts Schori and Michael Curry – offered tributes to his life and ministry in a press release from the Episcopal Church’s Office of Public Affairs.

“The Episcopal Church is faithfully seeking to truly become, ‘a house of prayer for all people,’ as Jesus said quoting the Hebrew prophets, and that is greatly the case because Presiding Bishop Browning taught us that the church must be a place where there are no outcasts,” said Curry, the 27th presiding bishop, in the release. “That enduring legacy is still helping to set many a captive free. It is evidence that God is not finished with us yet, for every once and a while spiritual giants still walk among us as living reminders.”

Many condolences and tributes were shared on social media, including from the Rt. Rev. George Packard, former bishop suffragan for armed services and federal ministries, who described Browning as “unfailing and faithful, he led us toward no barriers even when we were hesitant and lacked his courage and love.”

The Rt. Rev. Steven Charleston, a former staff officer for Native American ministries, bishop of the Episcopal Diocese of Alaska from 1991 to 1996 and later dean of Episcopal Divinity School, called Browning “a truly saintly person, full of vision and courage.”

Browning had worked to expand the church’s ministries with Native Americans, forming a groundbreaking national committee made up solely of indigenous members of the church.

Owanah Anderson of the Choctaw nation, and Episcopal Church indigenous officer on Browning’s staff, said at the news of his death, “Bishop Browning was the best friend my people ever had.”

Grieves said: “That probably sums up the feeling of most every person in the church who had the good fortune to know him.”

Browning “inspired a generation of us as a missionary priest, an international bishop, and presiding bishop,” said the Rt. Rev. Christopher Epting, former Bishop of Iowa who served on Executive Council with Browning for three years. “When he presided at my consecration, my only prayer was to follow in his footsteps. His contribution to this church, and to the cause of Christ in incalculable. May his rest this day be in the Paradise of God.”

Integrity’s Garner said that Browning “now rests in the bosom of the God who created, redeemed and sustained him throughout a long and productive ministry. By now he has heard the words ‘well done, good and faithful servant.’ May he rest in peace and rise in glory. May we ponder our loss even as we celebrate a ministry from which we received innumerable benefits.”

The official obituary by Sheryl Kujawa Holbrook, author of Heart of a Pastor, A Life of Edmond Lee Browning, is available here.