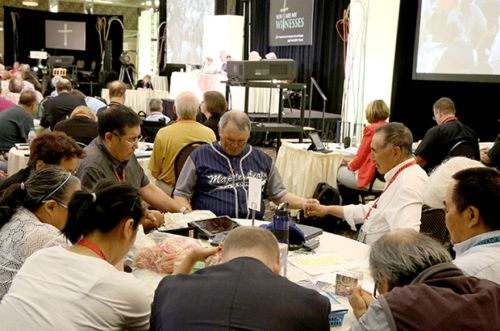 Some members of General Synod bow their head in prayer before the vote on same-sex marriage is called. Photo: Art Babych

[Anglican Journal] A resolution to change the marriage canon (church law) to allow for the solemnization of marriages of same-sex couples failed to pass by a fraction of a percentage point at the Anglican Church of Canada’s General Synod July 11.

The vote came after a five-hour legislative session on the floor of synod, in which more than 60 members from all orders and regions of the church spoke about their support, opposition and ambivalence concerning the motion before them.

Many members expressed sorrow that no matter how they voted, it would cause pain to someone. Many members told highly personal stories of their own treatment as LGBTQ [Lesbian, Gay, Bisexual, Transgender, Queer] people, in the Anglican church in particular, and their experiences with Christianity in general. Others were concerned that changing the marriage canon would be a violation of orthodox Christian doctrine.

“It is not about unconditional love,” said the Rev. Annie Ittoshat, an Inuit priest working in the Diocese of Montreal. “It is about what is clearly written in the word of God.”

Siobhan Bennett, a youth delegate from the Diocese of Niagara, disagreed.

“If we only needed the Bible, there would be no need for synod,” she said. “But we do need it, because we need the human interpretation of Scripture, and we live our faith—not just read it.”

While much of the debate vacillated between those who want greater inclusion for LGBTQ people in the church and those who believe homosexuality is sinful, some members argued that the motion left room for both sides to do right by their local context.

Bishop William Cliff, of the Diocese of Brandon, said he would feel comfortable voting for the motion, because while his own diocesan synod may ask him not to licence clergy to solemnize same-sex marriages, that doesn’t mean others shouldn’t have the same choice.

“[My diocese] will make this choice for themselves, and I will concur with their choice because it is their choice,” he said. “But I also as a bishop of the whole church do not want to stand in the way of those who wish to speak and care and love for those in their midst.”

The motion that was brought to synod had included a comprehensive conscience clause that allowed parishes, priests, diocesan bishops and synods to opt-out of the change, but was amended at the beginning of the legislative session in a motion brought by Archbishop Colin Johnson, of the Diocese of Toronto.

Johnson’s amendment removed the original conscience clause stipulations and replaced them with an opt-in that would require a diocesan bishop to authorize same-sex marriages.

The vote came as a result of a resolution passed at General Synod 2013 asking Council of General Synod (CoGS) to bring a motion for a change to the marriage canon allowing same-sex marriage, to General Synod 2016. The resolution also required broad consultation across the Canadian church, and with ecumenical partners and the leadership bodies in the global Anglican Communion.

However, as the debate went on, it became increasingly clear that synod members had radically different experiences with debates about the place of LGBTQ Anglicans in the church.

While some members expressed weariness over a debate they had been having locally for decades, others admitted that their own dioceses only started seriously discussing same-sex marriage in the last three years.

Because the resolution passed in 2013 required General Synod 2016 to vote on the matter, time to discuss the change was limited. As a result, several members said they felt things were moving too fast for them to make a real decision one way or the other.

“I feel the process we are using is fundamentally broken,” said Bishop Fraser Lawton, of the Diocese of Athabasca. “As long as I have had any kind of participation in the church at national-level conversations, we’ve been dealing in some way with sexuality, but we always seem to be coming at it legislatively…there’s been an awful lot of talking, an awful lot of writing, but I’m not sure much conversation has happened.”

Following the vote, Archbishop Fred Hiltz, primate of the Canadian church, cautioned synod members to be sensitive to the impact the decision would have on Anglicans across the country.

“Let us be mindful of all those for whom this result has pastoral implications, all those whose lives are touched deeply, and of the work that we must do as a church in pastoral care,” he said in a prayer following the vote.

Although the session ended with a service of Evensong, business came thundering back to the floor when Bishop John Chapman, of the Diocese of Ottawa, moved a motion calling for a “reconsideration” of the vote due to its closeness.

After a period of confusion about whether or not a recount would be possible, it was ruled that a reconsideration would require a new vote — a decision that was greeted with vocal hostility from some members.

Because the General Synod rules of order do allow a session of synod to revisit a decision it has made, but only if the motion to do so passes with two-thirds approval from the whole house, a separate vote was required before the issue at hand could be voted on again.

Several members came forward to voice concerns about whether such a revote was necessary, but Archdeacon Harry Huskins, prolocutor of General Synod, reminded the meeting’s chair, Hiltz, that the rules of order precluded debate on motions of this kind.

The question was called, but failed to pass, and the decision not to change the marriage canon was upheld.