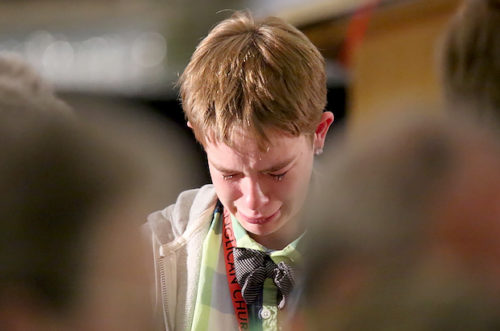 Pain and hurt in the aftermath of the vote to change the marriage canon that would have allowed same-sex marriages in church. Photo: Art Babych

[Anglican Journal] The primate had asked members not to applaud once the results were announced, and so silence greeted his declaration that Resolution A051-R2, on changing the marriage canon to allow same-sex marriages, had failed to get the two-thirds majority it needed in all three orders of General Synod.

Silent, too, were many of those the Anglican Journal approached for comments. One bishop said he wanted to address his diocese before commenting to the media. Another, Bishop Larry Robertson, of the Diocese of the Yukon, suggested that commenting on the divisive issue would only rub salt into fresh wounds.

“It’s caused too much pain already,” he said.

Signs of this pain weren’t hard to see in the aftermath of the vote. Within minutes of its announcement, several members walked out of the conference room rather than take part in the Evensong that followed the vote. In the corridor outside, a female youth delegate collapsed, sobbing, on the floor. Several bystanders came to her aid. Other members headed toward their rooms with swollen eyes and tear-stained cheeks.

After the Evensong—and a brief resumption of business while synod considered a motion to reopen the vote — a knot of members clustered around Archbishop Fred Hiltz, who said he would remain for a time to offer pastoral care. Some hugged the primate.

Here are some reactions from members interviewed by the Journal:

The Rev. Allison Courey, Diocese of Rupert’s Land
I’m very upset and disappointed. I’m mostly disappointed because it was so unbelievably close. The numbers looked like it had passed, and the primate actually said it had passed and then he said it hadn’t, and I thought because it was less than half a vote that for sure they would call a revote or at least double-check the numbers. The laity was way in favor and the bishops were much more in favor than anyone expected.

I thought it would pass in the clergy. The one I was worried about was the bishops, and it turned out that that wasn’t to be worried about.

Q: What’s ahead for you now?

I will move to a diocese that is going to move ahead with same-sex marriages. Or else not continue working in the church. I’m not prepared to be a second-class citizen in my own community any longer.

Bishop Fraser Lawton, Diocese of Athabasca
From where I stand there’s a sense of relief about it. But I certainly don’t feel any joy. This has been a very hard day and my heart breaks for people…and the pain the ones that feel that this decision means a rejection.

I think it’s really important to find some kind of way to start a conversation over again, to connect with people. The church is in a place where there’s been some real struggle in front of us and I think that everyone involved — however they voted, however they felt — it really is  a call to pray for one another, to compassion, to being very aware that each person is God’s creation and deserves honor and respect. I think there’s a lot of work in front of us as a church.

Ron Chaplin, laity, Diocese of Ottawa
I’m surprised…We need to see who voted and where the divisions are. Through the course of floor debates, I think we saw a geographic division of opinion…I think it points to some reconciliation work that needs to be done.

Q: Were you surprised that it failed in the Order of Clergy and not the Order of Bishops as had been anticipated?

I was surprised, but then again, I just kept it in mind that it was just one person, one vote. Two-thirds’ threshold is a very high threshold. But we recognize this is a very important decision, so we deliberately established a very high threshold. This was defeated at razor’s edge. At this triennium, we need to look at the reconciliation work that needs to be done. We’re not talking to each other properly still.

Q: How does this affect you as an openly gay person?

What breaks my heart is I’m 64 years old.I’ve been in every General Synod since 1995 talking about this issue. So after 21 years, this was the most respectful discussion I’ve participated in. What breaks my heart is to see the 20-year-olds here and how they’re reacting to it, and I don’t know quite what I can tell them. I had hoped it would be different for them than it was when I was 20 years old.

Jason Antonio, lay, Diocese of Qu’Appelle
That vote was on a knife’s edge. It could not have been any closer than it could have been. When the bishops’ communiqué came out in February saying they were not of one mind, people complained that the bishops were holding up progress. Today the bishops voted 68% in favor. It was the clergy that had sober second thoughts. And that was close.

It’s difficult to gloat in the sense of winning, considering it was that damn close. If it had been 10–20 %, that might have been different, but it was never going to be that close. This is a Pyrrhic victory, plain and simple.

I believed that the bishops would be the wild card, in the sense that they would continue to uphold the faith and the doctrine. I was surprised to see 68% had voted for [the motion], because now I have questions as to who voted in favor. I was definitely shocked to see the clergy at 66.23 %. I don’t know if this comparison is accurate, but at the 2013 General Synod, when it voted for this to happen, I think it was 68 or 70 % of clergy who voted in favor. So there has been a comedown since that time. Clergy here had a change of mind or saw that maybe they were conflicted, I don’t know.

I voted against the motion.

Bishop Dennis Drainville, Diocese of Quebec
We were really prepared for any eventuality, but to lose by one vote was beyond anything I could ever imagine.

The church will live through this, but for the next few days it will be very hard for many people. It’s going to take some time to get our heads cleared about what steps we need to take, moving on from here.

Q: Were you surprised that the Order of Bishops wasn’t the stumbling block?

I was surprised, but we knew it would be very close; we knew we had over 50% of bishops who were in favor of this. It was a surprise that we had the two-thirds majority.

Bruce Bryant Scott, Diocese of British Columbia
I’m disappointed at the result. I spoke in favor of it and I think we thought that if it would fail, it was going to fail in the House of Bishops—they came through, the laity came through.

But similar to what happened with the first vote for the ordination of women in the General Synod of the Church of England, it failed in the House of Clergy. Unlike the General Synod of the Church of England, we don’t meet twice a year; we meet once every three years. I have no doubt in my mind that this will come back in three years’  time; that we will have the opportunity to vote on it again and there is a very high likelihood that it will pass in the next one.

Our Westminster system of parliamentary decision-making can sometimes be very brutal — it has winners and it has losers. The requirement for a two-thirds majority in each house is a very high standard, and it’s there for a very good reason.

Obviously I will live with the result; it doesn’t affect me personally. But there will be people likely saying, “I can no longer be in the Anglican Church of Canada because of this.” And I’m dismayed at that. I hope that those who were on the other side of this question will take this opportunity to consider what they may have heard and see where the Spirit  leads them when it comes again, because this issue will not go away. The Spirit was moving in the direction of approving it, but for the want of one single vote, we cannot, at this time, through General Synod, move.

—With files from Marites N. Sison