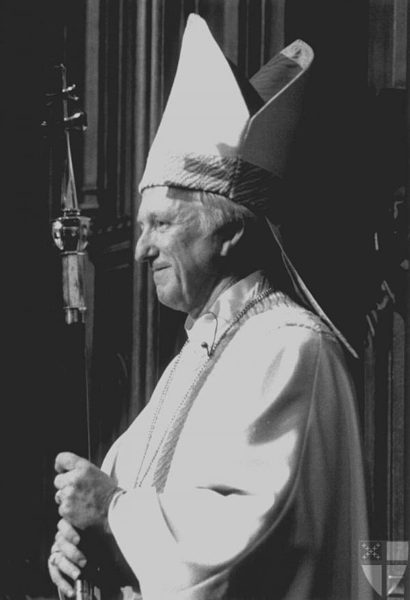 The Rt. Rev. Edmond Lee Browning was installed Jan. 11, 1986 as the 24th presiding bishop of the Episcopal Church. Photo: Episcopal News Service via the Episcopal Archives

[Episcopal Church Office of Public Affairs, Episcopal News Service] Bishop Edmond Lee Browning, the 24th presiding bishop of the Episcopal Church, died on July 11, 2016. He was 87 years old and was living in Oregon.

Browning served as presiding bishop of the Episcopal Church from 1986-1997. Browning’s election as presiding bishop in 1986 was seen as a reflection of the church’s broadening diversity due to his extensive international and multicultural experience.

Browning hoped to encourage a growing awareness of diversity in the church. He was well-known for his quote, “no outcasts in the church.”

“The Episcopal Church is faithfully seeking to truly become, ‘a house of prayer for all people,’ as Jesus said quoting the Hebrew prophets, and that is greatly the case because Presiding Bishop Browning taught us that the church must be a place where there are no outcasts,” said Presiding Bishop Michael B. Curry, the 27th presiding bishop. “That enduring legacy is still helping to set many a captive free. It is evidence that God is not finished with us yet, for every once and a while spiritual giants still walk among us as living reminders. And one of those reminders was Edmond Lee Browning, 24th presiding bishop and primate of the Episcopal Church. Well done good and faithful servant. May you rest in peace and rise in glory.” 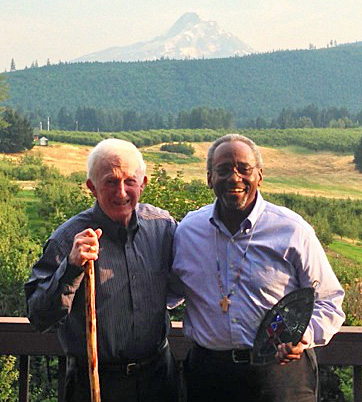 In August 2015, when he was still presiding bishop-elect, Bishop Michael Curry traveled to Oregon to visit Bishop Edmond Browning on his farm in the Hood River Valley. Photo: Mary Lujan

Bishop Katharine Jefferts Schori, the 26th presiding bishop, said: “Edmond Browning brought vast experience to his role as presiding bishop, from his early ministry in Texas, to his labors as a missionary in Okinawa, his love of the ‘Ohana of Hawai’i, and his pastoral care of the Convocation of Churches in Europe. His ministry was marked by care of the outsider and marginalized wherever he went. He stewarded the union of Okinawa with the Nippon Sei Ko Kai, he insisted there would be ‘no outcasts’ in the Episcopal Church, he drew Hawaiian and European congregations closer to their contexts, and he maintained a passionate care for the plight of Christians in the Land of the Holy One. He gave his all, and it cost him dearly. We can only echo what he is nearing now: Well done, good and faithful servant. You have loved all those entrusted to your care with a passion like that of Jesus. Rest from your labors in the arms of the One who loves you beyond imagining.”

“Bishop Browning was very much ‘My Presiding Bishop,’” said Bishop Frank Griswold, 25th presiding bishop. “I was ordained a bishop the same year he was elected presiding bishop. During the 12 years that followed, I had the opportunity to work closely with him, particularly as a member of the committee that planned the twice-a-year-meetings of the House of Bishops. What particularly struck me in all aspects of his ministry was his trusting and compassionate heart open to all. For him, the mission of the church was to uphold the dignity and worth of each person within the reconciling embrace of God’s inexhaustible love. He did so not without great personal cost. As his successor, on visits to Okinawa and Hawaii where he had served as bishop, I was struck by the enduring affection and gratitude that so many lay people and clergy expressed for the ministry and friendship of Bishop and Patti Browning. In a very real sense, he was still their bishop.”

“Bishop Browning appointed me to my first churchwide position when I was untested and unknown,” said the Rev. Gay Clark Jennings, president of the House of Deputies. “He gave me a chance to lead, and I will be forever grateful for the trust and confidence he placed in me. Everything about my churchwide ministry and the gospel witness of our church for the past three decades has been shaped by Ed Browning’s proclamation that ‘there will be no outcasts.’ We all owe him an enormous debt. Well done, good and faithful servant.”

Browning’s theologically liberal stance was admired by some and criticized by others both in the Episcopal Church and the Anglican Communion, particularly his views about the full inclusion of LGBT people in the life of the church. 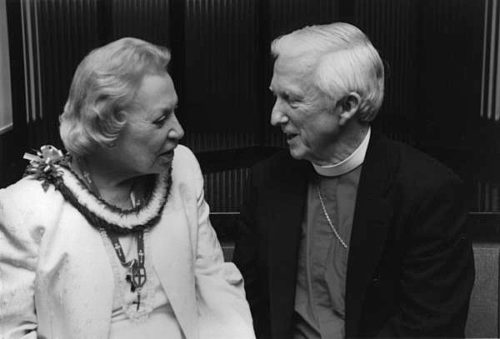 Browning was elected at the 68th General Convention of the Episcopal Church in Anaheim, California, in September 1985. He was the last presiding bishop to serve a 12-year term.

His was the first installation to take place within the context of the Eucharist. Then primate of Japan,  John M. Watanabe, and Archbishop Desmond Tutu, who was then the archbishop of Cape Town and the primate of the Church of the Province of Southern Africa, were in attendance.

As presiding bishop, he was the first to observe a World AIDS day of prayer on Nov. 9, 1986, and established what is now Episcopal Migration Ministries, the Episcopal Church’s refugee resettlement agency, in 1988.

In February 1989, Browning again made history by consecrating the Rev. Barbara Harris of the Diocese of Massachusetts as the first female bishop in the Episcopal Church and in the Anglican Communion. 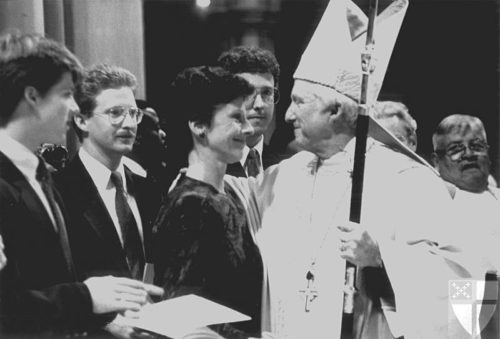 Newly installed 24th Presiding Bishop Edmond L. Browning is congratulated by his wife, Patti. Sons John (far 1.) and Mark look on, as does son Philip (c., partially blocked, between and behind them) during the service at Washington Cathedral. Photo: Episcopal News Service via Episcopal Archives

Browning served as last bishop of the Missionary Diocese of Okinawa before it became part of the Nippon Sei Ko Kai (the Anglican Church in Japan). The transfer of the Okinawa diocese to the Japanese church was approved by the General Convention in October 1972.

Browning was married to Patricia Alline Sparks in 1953 and the couple had five children, Mark, Philip, Paige, Peter and John.

Funeral Liturgies will be held on July 17 at 1 p.m. at St. Mark’s Episcopal Church in Hood River, Oregon; and on July 19 at 2 p.m. at Trinity Episcopal Cathedral, Portland, Oregon. A service is also planned at St. Andrew’s Cathedral, Honolulu, Hawaii – date to be announced.