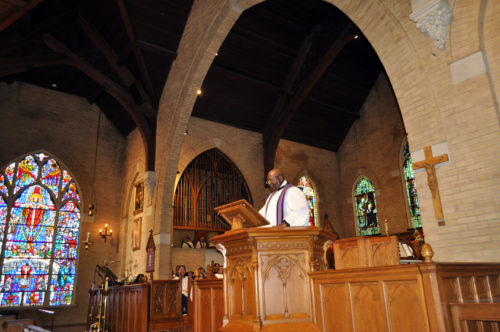 The Rev. Oliver Lee, rector of Trinity Episcopal Church in Dallas and a chaplain for the Dallas Police Department, preaches during a Requiem Mass for the Fallen and Prayer for the City of Dallas at St. Mathew’s Cathedral. Photo: Diocese of Dallas

This well-known Christian theme reverberated throughout North Texas churches Sunday as clergy tried to give hurting congregants a way to move forward after the last several days of violence in Dallas and the nation.

The whole purpose of God’s love, mercy and forgiveness has always been to bring us into right relationship with one another, preached the Rev. Oliver Lee, during a Requiem Mass for the Fallen and Prayer for the City of Dallas at St. Mathew’s Cathedral. Lee, who is rector of Trinity Episcopal Church and a chaplain for the Dallas Police Department, told the congregation of about 300 that it’s time for everyone to think more intentionally about living a life of love, grace and forgiveness.

The prayer service comes just days after the July 7 mass shooting during a rally in downtown Dallas where protestors had been peacefully protesting the deaths of two black men by police officers in other states. At the rally, a lone gunman’s bullets blistered the crowd hitting 12 law enforcement officers, five fatally, and striking two pedestrians.

Lee served as a hospital chaplain that fateful night rushing to the hospital not yet realizing that he would know two of the men who had died. During the sermon, he tried to make sense out of why anyone would target law enforcement officers. “Imagine a society without police. Life as we know it would not exist. Think about it. Our nation would be reduced to fiefdoms of petty warlords who would be a law unto themselves,” Lee said.

In addition to the requiem, congregations throughout Dallas wrapped themselves in prayer, Scripture and worship Sunday as they processed the recent violence and sought answers for a more peaceful world.

Episcopal Diocese of Dallas Bishop George Sumner joined Bishop J. Lee Slater at New Millennial Bible Fellowship and Praise Center in Dallas to worship and to build further an existing relationship with the bishop and his church. The two bishops co-chair this year’s Dallas Champions Academy, an organization for at-risk boys and girls, ages 8-18, during a life-skills and sports camp with the aim of getting them into college. The bishops have also been planning a pulpit swap in the fall to foster a deeper relationship between the denominations.

Slater’s wife, Lady Donna Slater, who is executive pastor at the church, preached a sermon telling worshipers that they should not let the world dictate their behavior but to follow Scripture and act with forgiveness and love. “So many times we are waiting on someone else to show their manners when God wants us to show our manners,” she said. “God says show your love. We don’t have to worry about what other folks are doing, just do what you are supposed to do.”

She also cautioned not to make the immediate days after the violence be the only time to show love to neighbors and associate with those from another culture.“God is not impressed when you hold hands with people you don’t normally speak to, for only one day. Are you following along with the world, or are you standing against?”

In another corner of Dallas, at St. Augustine’s Oak Cliff the Rev. Paul Wheatley talked about the parable of the Good Samaritan, a story of love, generosity and mercy coming from an unexpected place.

“It serves as an encouragement and correction to the way we tend to gather with and care for people who are most like us before we serve those people who may look or live differently than we do. ‘And who is my neighbor?’ the lawyer slyly asks. Jesus’ reply would rightly lead us to conclude that there is no one we could exclude from the right to be loved as our neighbor. Black, white, gay, straight, police, criminal, Muslim, Jew, atheist: all are our neighbors, and all are worth loving.”

Sumner told the parishioners that this is a time for the church to help them come through the recent horrific days with some hope and encouragement.

“In spite of its divisions in the world, the Church is Christ’s body, which is one,” Sumner later said in a statement. “This reality comes from Him, not us. The moment in which we live calls us to a common Christian witness, across all lines of class race, and denomination. We need to be praying what forms that witness needs to take.”

At the requiem, Lee emotionally read the names of the fallen officers and reiterated that in God’s kingdom, all lives are equal. “My sisters and brothers, our Savior, Jesus Christ willingly suffered death upon the cross because unequivocally, irrefutably, and indisputably, He knew that: All. Lives. Matter.”