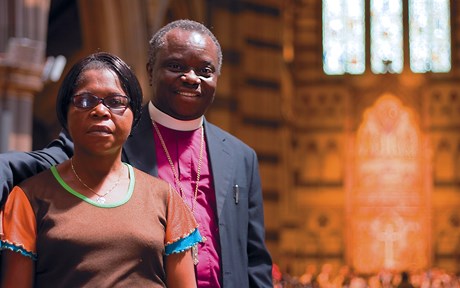 [Anglican Communion News Service] The Bishop of Kindu, Masimango Katanda, has today (Monday) been elected as the next Primate and Archbishop of the Province de L’Eglise Anglicane Du Congo – the Anglican Church of Congo. He will succeed Archbishop Henri Isingoma.

Ugandan evangelist Apolo Kivebulaya established the Anglican presence in Zaire in 1896. The Church reached the Shaba region in 1955, but evangelisation did not progress on a large scale until the 1970s. Following independence, the Church expanded and formed dioceses as part of the Province of Uganda, Burundi, Rwanda, and Boa-Zaire. The new Province was inaugurated in 1992 and changed its name in 1997.

In 1996, Masimango Katanda was elected as the first bishop of the new Diocese of Kindu, which covers the entire area of the Province of Maniema and the territory of Shabunda in the neighbouring Province of south-Kivu.

Working with Church Mission Society Ireland, the Diocese has built a primary school, established a diocesan-wide HIV/Aids programme, set up a new clinic and establish a very successful micro-credit programme for women.

Bishop Masimango was soon involved in peace-building and reconciliation work in the 1998-2003 Civil War, going into the forest to negotiate with rebel leaders.

“I did research into the rebel leadership and found most had some links to families in the Church,” he explained in 2008 in an interview with Beryl Rule for the Melbourne Anglican, republished by ACNS, “so I started working to form connections. The second step was to go into the forest and meet the leaders. I found two or three who were church attenders and asked them what was the problem? They said they were fighting the foreign-led Government – they wanted power to be more local.

“And I said to them that bullets can’t choose whom they kill and many innocent people were being hurt. I told them that cutting the roads wasn’t hurting the Rwandans, who were receiving food by air. It was the rebels’ own families – the Congolese in the villages – who were being condemned.”

As a result, the rebels decided to open the roads and so more food became available to the villages.

In 2014 he received four votes in the primatial election which saw the sitting Archbishop, Henri Isingoma, re-elected for a new five-year term with five votes. Archbishop Henri announced in March that he was stepping down to have a health improvement break and return to theological academia.