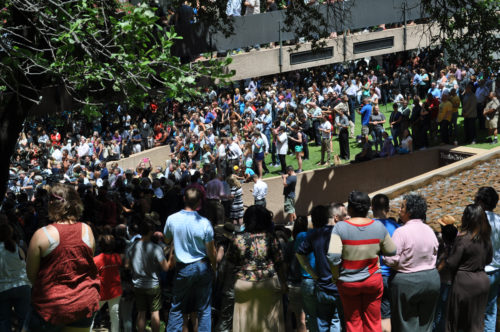 [Episcopal Diocese of Dallas] Thousands of people sought comfort in the Lord on Friday, July 8, at numerous prayer services offered throughout North Texas just one day after an ambush in downtown Dallas brought the city to its knees when a gunman shot 12 law enforcement officers, five of them fatally.

“Our city is broken, aching and torn,” said diocesan missioner for evangelism Carrie Headington, who attended one of the services. “Today was a clarion call to action. A call to pray. A call for racial reconciliation. A call for justice and peace. A call to see the dignity in all persons. A call for the church to live fully into our mission as ambassadors for Jesus. Today is a call to love.”

Dallas Mayor Mike Rawlings organized an outdoor ecumenical vigil in downtown Dallas that drew hundreds of people at noontime into the Texas heat. Bishop T.D. Jakes of The Potter’s House nondenominational church told the crowd to hold hands and said, “We are gathered together at Thanks-Giving Square in Dallas to pray for our city and our nation.”

It was powerful to listen to civic and religious leaders speak about healing and building a more peaceful society, said the Rev. Casey Shobe, rector for Church of the Transfiguration in Dallas. He noted the importance of taking the prayer back out into the world and trying to transform society into a more peaceful world.”

Many people at the event showed their support and care for the city. One man carried a sign that read, “Free Hugs,” while workers from 7-Eleven passed out free bottled water to the hot crowd on a day when the temperature neared 100 degrees. Police officers were also on hand tying navy and yellow ribbons around tree trunks in solidarity for their fallen officers.

Headington, who is involved in justice and reconciliation work in the city of Dallas and with the Greater Dallas Coalition, said the prayer gatherings should serve as a springboard for reconciling action needed in the city. She is currently working with Dallas Bishop George Sumner to organize a powerful reconciliation event for the diocese in the fall.

“Today’s events show that we need to have grace and love for our neighbors,” said the Rev. Keith Turberville, rector of Holy Trinity by the Lake in Heath, Texas. “Christ wants us and needs us to have big hearts opening ourselves to a wider circle. So let us all be challenged together and learn from this and may we all build a bigger neighborhood.”

The Rev. Bill Cavanaugh, rector at Church of the Epiphany in Richardson, agreed. “I hope as we build bridges here we might build bridges in our parishes and we might truly begin to build that Kingdom that God desires us to experience not only as Episcopalians but as brothers and sisters throughout the world.”

Several churches throughout the diocese offered prayer services including Saint Michael and All Angels, Good Shepherd in Dallas and Church of the Incarnation where the Rev. Thomas Kinkaid III asked the nearly 200 mournful who filled the pews, “how do we know God is still here?”

Kinkaid, who is vice rector, pointed out that the protest was against police brutality, and began as a peaceful, respectful event. “Then the shooting started, and protesters grabbed their kids and ran for cover, police officers ran at the bullets. Doing exactly what we count on them to do each and every day, they ran toward their own danger, and for some, their own death.

“How do we know God is still here? Jesus said: ‘This is my commandment that you love one another as I have loved you. Greater love has no man than this, that he lay down his life for his friends.’”

Sumner, who is traveling to Dallas from Costa Rica, said that there is no easy answer to the crisis that Americans face. He asked that for prayers for all those who are harmed in spite of all the fault lines in our society. “May the Holy Spirit guide us all in discerning the shape of our common witness. May we all be praying for the welfare of our city and all its inhabitants. May He protect all exposed to danger in their work.”

Immediately after the shooting rampage, the Rev. Oliver Lee, rector of Trinity, served in the hospitals talking to family members of a deceased officer as they absorbed the atrocity of the night and the fate of their loved-one. “As you can imagine the strain of these events have taken an unbearable toll on the families of the dead, and also on the officers, many who had been with their colleagues mere moments before, and on the community, which has borne the burden of this unimaginably tragic event,” Lee said.

The need for prayer has not ceased and more events are scheduled including a diocesan-wide Requiem Mass for the Fallen and Prayer for the City of Dallas at 4 p.m., July 10 at St. Matthew’s Cathedral with Sumner as celebrant and Lee as preacher. Sumner will also attend New Millennium Bible Fellowship Praise Center with its Bishop J.L. Slater, at 10:30 a.m., July 10.

Kincaid tried to put the horror of the shooting into perspective during his sermon when he said that God showed up in the brokenness. “Dallas Police Chief David Brown put it this way: ‘I’ve never been more proud of being a police officer …seeing the courage …and…grit to stay on the scene, looking for suspects, knowing that we are vulnerable.’

“How do we know God is still here? Because when bullets start raining down from above, some people ran at those bullets laying down their lives for friends they didn’t know they had.”

Prayer suggestions from the Rev. Oliver Lee
We request your prayers for the officers who were killed in the line of duty that their souls may rest in peace and that light perpetual would shine upon them.

We request your prayers for those who were injured, that they may be healed and restored to the fullness of body, mind, and spirit.

We request your prayers for the officers’ families, friends, loved ones, and co-workers, that they be comforted and strengthened, confident in God’s mercy and loving care.

We request your prayers for the City of Dallas and this great nation. That from Bangor, Maine to Eureka California we may unite as a nationwide community of love, compassion and respect, and that individually and collectively, we will honor our pledge, united as “one nation under God, with liberty and justice for all.”