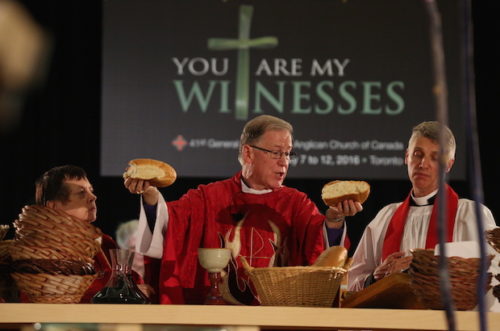 [Anglican Journal] Standing before the broad wooden altar dominating the center of the meeting hall, clothed in crimson vestments, the primate of the Anglican Church of Canada delivered his sermon at the opening Eucharist of the 41st meeting of General Synod in a voice thick with emotion.

“This is the body that through its history has…wrestled with numerous issues within the church and in the world at large over which we have often found ourselves in deep disagreement,” Archbishop Fred Hiltz said speaking of General Synod itself. “Many of the issues have centered around inclusion.”

In a silence that was palpable save for the low hum of the air conditioners, Hiltz listed the major debates that have arisen and been resolved since the General Synod of the Canadian church first met in 1893 — the ordination of women, the right of children to take the Eucharist, the remarriage of divorced persons and the place of Indigenous peoples — before culminating with the most contentious issue of the present day: the marriage of same-sex couples.

“In previous synods we have often done our work of discernment and decision making well, and sometimes not,” Hiltz said. “We acknowledge that in our efforts to lift every voice we have fallen short in our capacity to hear the voice of the Spirit whispering into our proceedings a word of wisdom and grace.”

The celebration of the Eucharist, rich in pageantry, art and song, officially launched the 2016 triennial meeting of synod being held July 7-12 at the Sheraton Parkway Toronto North Hotel  & Suites.

As the primate’s words rolled out over the assembly of about 350 members, ecumenical guests, observers and support staff, they carried with them a certain sense of gravity. In only a few days, General Synod members will decide whether or not to allow the marriage of same-sex couples — a decision that could have long-term effects on the internal unity of the Canadian church, and its place in the 77-million member global Anglican Communion.

But Hiltz reminded the gathering that while they face a difficult task they should draw comfort and strength in knowing that they are “being upheld in waves of prayer” by Christians across Canada and around the world.

“All who pray with and for us have an understanding of a Synod for what it truly is — an assembly of the People of God from every jurisdiction within the Church gathered to do its work under the presiding of the Holy Spirit,” said Hiltz. “Accordingly they join us in prayers that the Holy Spirit will come and hover, settle and abide with us, to grace and guide, enlighten and lead.”

A visible sign of this prayerful support was manifest in the presence of a number of international, ecumenical and interfaith leaders.

Some of them, like Bishop Griselda Delgado del Carpio of the Episcopal Church of Cuba, Bishop Francisco de Assis da Silva, primate of Brazil, Presiding Bishop Michael Curry of The Episcopal Church, and National Bishop Susan Johnson of the Evangelical Lutheran Church in Canada, will be guests for the entire General Synod.

Hiltz also urged synod members to pray for one another and offered former Archbishop of Canterbury Rowan Williams’ counsel at the 2008 Lambeth Conference to “muster the courage to speak to someone with whom a conversation would be difficult.”

The service began with an unusual twist on an old Anglican tradition: a procession of clergy and lay people carrying colorful wooden staves with elaborate heads reminiscent of shepherd’s crooks and walking sticks, who entered before the main procession of lead clergy and ecumenical guests.

According to Elizabeth Adams, the artist who created them, the staves were meant to invoke the people of God on the move, ready to heed the Holy Spirit’s call.

This sense of creativity was carried through other elements of the service. The opening prayers, for example, involved a ceremony in which youth delegates brought jars of water from the four corners of the room to fill the baptismal font, and the service was later punctuated by an interpretive dance performed by members of the L’Arche Daybreak community in Richmond Hill.