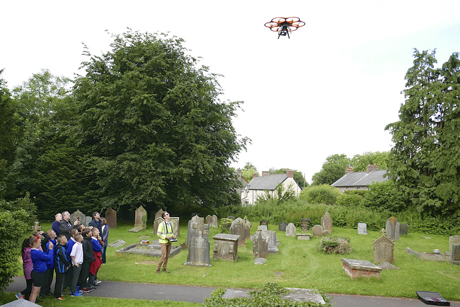 [Anglican Communion News Service] A diocese of the Church in Wales is using unmanned aerial vehicles (UAVs), more commonly known as drones, in a pilot project to map centuries-old churchyards. For hundreds of years, burial records have been confined to written registers, books, and hand drawn maps and plans. But cutting-edge technology is helping to produce a more interactive – and accurate record.

The Diocese of Llandaff is piloting the scheme in four parishes. Images taken by the drones will be combined with photographs of headstones and scans of handwritten records going back hundreds of years.

School children in St. Nicholas, Penarth, Ystrad Mynach, and Glyntaff, Pontypridd are helping the project by taking photos and drawings that can be linked into the images created by Atlantic Geomatics’ Burial Ground Management System.

“The main aim of the system is to make churchyards more easily manageable for parishes but it will also provide a vehicle for historical information and allow easy access to family history,” Sarah Perons, the diocese’s care of churches advisor, said. “The use of drones in the survey has the added benefit of enabling us to check the condition of our church buildings without having to erect scaffolding.”

If successful, the project may be rolled out to more parishes across the diocese in the future.

Rhys Jones, the deputy head of St. Nicholas School in St Nicholas, Vale of Glamorgan, said, “Our Year Six pupils thoroughly enjoyed seeing these high-tech tools being used to record their local churchyard and to play their own part in the record making process.

“Linking up with this project has been fascinating for pupils as it covers so many areas of the curriculum from history and geography to ICT, maths and science and is so worthwhile for local schools to get involved with.”

Atlantic Geomatics say that the maps produced by the system can also be used to show how much space remains in churchyards to help local authorities plan for the future.

“Virtually no churches have mapping of their churchyard and often their registers are not backed up so there is a great risk of things being lost,” the company’s managing director, Tim Viney, said.

“Our system not only maps the churchyard but protects the heritage for future generations and it means the records are easily accessible. Under the system churches will be able to maintain the map themselves so if there is a funeral and burial then they can add the details themselves.

“It was great to have the schoolchildren from the local school on site with us at St.

Nicholas Church helping us collect the data and photograph headstones.  We are keen to get volunteers involved as they can help with data entry and photography.

“Each project can also be tailored to have slightly different priorities such as at St. Augustine’s which is particularly interested in the wildlife and ecology present in the churchyard.”