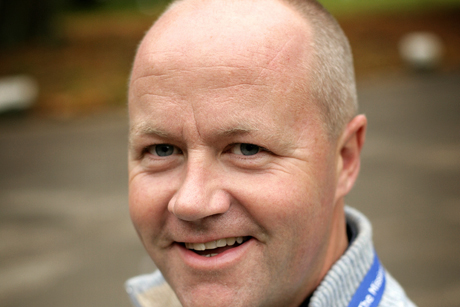 The Rev. Canon Stephen Miller has received the Dr Dierk Lindemann Welfare Personality of the Year Award in recognition of his “exceptional services for the welfare and wellbeing of seafarers.” Photo: Mission to Seafarers

[Anglican Communion News Service] A regional director of the Anglican mission agency Mission to Seafarers has received the coveted Dr Dierk Lindemann Welfare Personality of the Year Award. The Rev. Canon Stephen Miller, the Anglican mission agency’s regional director in East Asia, was one of seven people to be recognized for their “exceptional services for the welfare and wellbeing of seafarers.”

“It was a great honor to receive the [award for] Seafarer Welfare Personality of the year,” Miller said. “Most of us who work with seafarers each day appreciate the sacrifice that each crew member makes, in leaving family and friends for many months at sea, sometimes with long periods of no communication with home. All this to bring us the essentials we need to live our lives as we would wish.

“The Mission to Seafarers is there when required, to help through good times and bad, to offer support and care, a helping hand, a listening ear. Over the last 18 years working in the ports of Rotterdam, Dubai and the UAE and now in Hong Kong I have tried to do all I can to make that sacrifice less painful for the seafarer. Working for justice and righteousness in the work place and now with projects in Philippines and Myanmar working for those things with the families of seafarers in their own homes.

“The last 18 years has been a great privilege and I hope the years to come will be as fulfilling. I would like to thank all at ISWAN and those who nominated me, and I would like to dedicate the Award to the memory of Father John Van Deerlin, a Catholic priest and dear friend, who I worked with closely in Dubai for many years, who served the migrant community and in particular seafarers, who sadly died two years ago,” he said.

The award was welcomed by the secretary general of the Mission to Seafarers, the Rev. Canon Andrew Wright, who said it was “richly deserved.”

“His work as regional director of East Asia has been vigorous and highly effective,” Wright said. “He has worked hard to support and strengthen our extensive, established network of chaplaincy and maritime welfare. More than that, he has been characteristically innovative in developing new port work and new projects. In particular, our two new mission family projects in the Philippines and Myanmar have been ground-breaking and have already made a big difference to many lives. I congratulate him on behalf of the whole Mission to Seafarers team.”