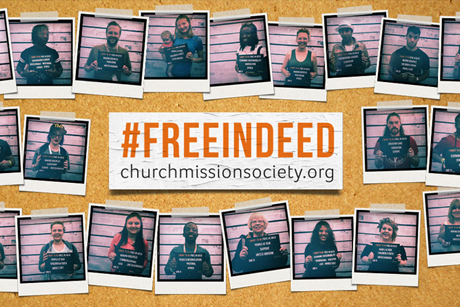 Through its Free.In.Deed campaign, the Church Mission Society is seeking to recruit 1,000 new missionaries to follow in the footsteps of pioneers like William Wilberforce and Samuel Crowther.

[Anglican Communion News Service] Ambitious plans to recruit 1,000 new missionaries to follow in the footsteps of pioneers like William Wilberforce and Samuel Crowther have been unveiled by the Church Mission Society (CMS). The Free.In.Deed campaign is “based on the belief that all Christians are called by God into mission,” the Anglican mission agency says as it seeks to identify a “new generation of Christian missionaries who will cross cultures and even continents to bring change, hope and freedom to the world.”

The Free.In.Deed campaign is targeting individual Christians and local churches to find “a wave of people who are passionate about communicating the Christian message to this generation,” a CMS spokesperson said.

“For many Christians ‘calling’ is a nebulous concept, shrouded in uncertainty and religiosity,” CMS’ executive leader, Philip Mounstephen, said. “The Free.In.Deed campaign aims to change that and revitalize our relationship with mission so we don’t just see it as a responsibility to be taken seriously but rather a privilege to be called to.

“If every Christian put their mission call in action, the world would be a very different place – the love of Christ would renew people and places, pioneer leaders would be forging new paths of transformation, people on the margin would flourish, the healing of creation would begin.

“This campaign is more about the ‘friend in the pub’ than the ‘man in the pew’, and is calling out ordinary people, with a passion to serve their community, both here in the UK and overseas.”

The agency’s church engagement manager, Thomas Fowler, said: “The search is on to find 1,000 new missionaries. . . For some that call will mean crossing the street but for others the call will require them to cross a continent.”

CMS say that the campaign will “help Christians recognize God’s call to mission on their life” and set people “free to fulfill their calling, both practically and creatively, in a relevant context.”

It says: “On taking part in Free.In.Deed people will be shown how to explore their unique talents, abilities and passions, through a vocational training program incorporating webinars, expert tuition, training as well as a new resources hub, to help prepare them for the future.”