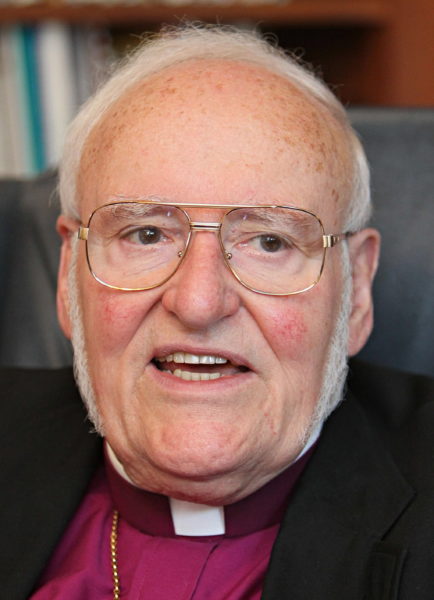 A memorial Eucharist for Bishop Salmon will be held July 2 at 11:00 a.m. at Grace Church Cathedral in Charleston, South Carolina. The Rev. Dow Sanderson will preach.

The Church of St. Michael and St. George near St. Louis will keep a vigil beginning July 6 and funeral services will follow on July 7.

Salmon was born in Natchez, Mississippi, on Jan. 30, 1934. He graduated with a Bachelor of Arts degree from the University of the South in 1956. In 1960, he graduated from Virginia Theological Seminary, and was ordained a deacon in 1960 and priest 1961 in the Diocese of Arkansas.

He was elected as the 13th bishop of the Diocese of South Carolina on Sept. 9, 1989, and consecrated Feb. 24, 1990. He served until January 2008. In retirement he continued as a member of the House of Bishops of the Episcopal Church and participated in the 78th General Convention in Salt Lake City last summer.

Bishop Provisional Charlie vonRosenberg of the Episcopal Church in South Carolina said June 29 that Salmon had served in South Carolina during a significant part of his time as bishop of East Tennessee, and thus they were colleagues. “Ed had a unique leadership style among bishops, and he could be counted on to offer his particular point of view on most matters,” he said in a statement. “His perspectives and personality were assets among his fellow bishops. He will certainly be missed.”

In 2007, Salmon was awarded South Carolina’s highest civilian honor, the Order of the Palmetto. He served on the board of Kanuga Conferences, Hendersonville, North Carolina, and in leadership positions at schools and organizations including the University of the South, Voorhees College, Porter-Gaud School, Bishop Gadsden retirement community, York Place, and the Province IV House of Bishops. He served as dean of Nashotah House Theological Seminary in Wisconsin from 2011-2014. He also chaired the Anglican Digest board of trustees for many years.

He married Louise Hack in 1972 and they have two children, Catherine and Edward, III.