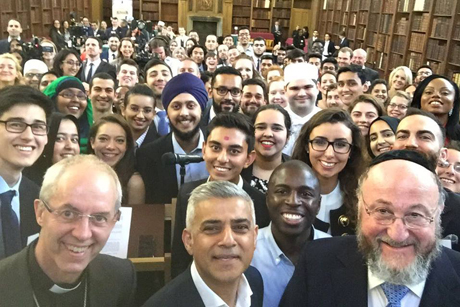 Mayor of London Sadiq Khan’s selfie with Archbishop Justin Welby and Chief Rabbi Ephraim Mirvis in front of 100 young people from different faith groups has been widely shared on social media and praised as an example of UK unity at a time of increased community tensions and racist attacks.
Photo: Sadiq Khan

[Anglican Communion News Service] Church leaders have criticized the rise in racist abuse and attacks in the United Kingdom following last week’s historic referendum decision to withdraw from the European Union. Members of ethnic minority communities and immigrants from across the EU have reported being told to “go home – we voted to leave” and other forms of abuse.

On the evening of June 27 the Archbishop of Canterbury hosted a multi-faith Iftar meal for 100 young people from across London’s faith communities at Lambeth Palace. It was attended by the UK’s Chief Rabbi Ephraim Mirvis and London Mayor Sadiq Khan.

The mayor, a Muslim, took a “selfie” with Archbishop Justin Welby and Chief Rabbi Mirvis in front of the young people. It has been been widely shared on social media and praised for showing the real face of the UK.

“This is London!”, the mayor tweeted. “Breaking my fast tonight with the Chief Rabbi, Archbishop Justin Welby & young Londoners of many faiths in the beautiful surroundings of Lambeth Palace.”

Welby it was “a huge privilege and joy” to host the Iftar, and added: “Britain is a country divided in many ways at the moment – and we’ve seen a rise in intolerance, discrimination and hatred.

“But last night was a powerful reminder that faith communities in this country can work together in friendship and solidarity for the common good.

“These friendships will be absolutely crucial as we build a new vision of what it means to be an outward-looking, generous and hospitable country in the world.”

Earlier, as the British Parliament discussed the result of the referendum, Bishop of Chelmsford Stephen Cottrell said that a head teacher in his diocese told him that “the children were frightened when they went to school on Friday and that she had seen an increase in race hatred and intolerance.”

He asked the government: “What plans are there to address the lack of unity in our nation and to counter the fear and race hatred that is on the rise? Can we ensure that those who lost this vote, as well as those who won, can be part of the planning going forward?”

Speaking on June 24, Mirvis said: “The respective campaigns that led us to this point have sharply divided our country. But the time for disagreement and division is now over. It is more essential than ever before that we unite so that the ensuing political upheaval does not adversely affect the most vulnerable in our society and that our moral leadership role in the world remains undiminished.”

The Church of England has published prayers for reconciliation, including a brief litany which can be used in services on Sunday or in small groups.

British Prime Minister David Cameron arrived in Brussels June 28 for talks with the leaders of the 27 other EU member states. Many are pushing for the UK to invoke Article 50 of the EU Treaty – the legal mechanism for starting two-years of exit negotiations – swiftly; but Cameron has insisted that the decision to begin the formal legal process will be for his successor to make. Cameron will resign as prime minister as soon as the Conservative Party has elected a new leader which is expected to take place by early September.