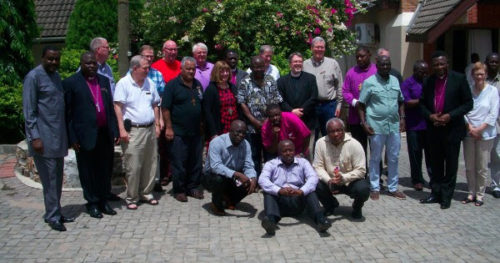 Bishops from North America, Africa, and England meet at the Seventh Consultation of Anglican Bishops in Dialogue in Accra, Ghana.

[Anglican Church of Canada] Introduced by the Most Rev. Prof. Emmanuel Asante as an ecumenical contribution from the Methodist Church of Ghana, the Akan concept of sankofa served as a guiding framework for the Seventh Consultation of Anglican Bishops in Dialogue, which took place from May 25-29 in Accra, Ghana. The gathering brought together bishops from Canada, Ghana, Swaziland, Tanzania, Kenya, South Africa, Burundi, Zambia, England, and the United States.

Sankofa — literally, “It is not a taboo to fetch what is at risk of being left behind” — refers broadly to the unity of past and present, where the narrative of the past is a dynamic reality that cannot be separated from consideration of the present and future.

The Consultation of Anglican Bishops in Dialogue emerged after the 2008 Lambeth Conference as a way for bishops from different backgrounds to continue an ongoing, respectful dialogue in the midst of significant disagreements, primarily over the issues of human sexuality and same-sex marriage.

The document that emerged from the latest meeting, A Testimony of Unity in Diversity, highlights the growing sense of understanding among the bishops of each other’s experiences. Referring to the self-examination and presence of the past inherent to sankofa, the testimony notes: “It is this sense of history and tradition that informs and guides us … In our Anglican tradition this means unity but not uniformity. Unity in diversity is a distinctive feature of Anglicanism throughout the Christian world. Such unity always brings about dialogue and self-examination.”

Ingham, who has attended all six of the previous consultations, described the Accra gathering as “very much a continuation of what we have experienced before,” which allowed the bishops to build on trust and friendships they had established and model a way of active listening and respectful exchange of views.

Throughout all seven gatherings, he noted, there has been one constant: “The fact that we are united by mission more than we are divided by controversy.”

Promoting understanding
With more bishops attending the consultation than ever before, this year’s gathering was the first at which the Most Rev. Michael Curry, presiding bishop of The Episcopal Church, was present. Both Curry and Hiltz, who was present for approximately one and a half days, spoke about recent developments in the U.S. and Canadian churches on the question of same-sex marriage.

“The value in having the two of us there, I think, was that the issue that originally brought people together — that is, our challenges and our differences over matters of human sexuality — was actually put right on the table,” Hiltz said.

Ingham noted that despite the bishops present holding many different theologies on marriage, sexuality and biblical interpretation, “we’re not divided by these differences. Rather, we’re spurred to be curious with each other and to hear how these matters play out in our different parts of the world.”

“We’re all very aware that mission is contextual,” he added. “And I think most of the African bishops who attend understand that social and legislative challenges have taken place around homosexuality in Western countries.

“That doesn’t mean that they agree with it, but they understand that we are placed in that situation and must respond to it. And I think by the same token, the Western bishops … have a deep sense of respect for the way African churches are trying to deal with this, because all of the Africans know that they have to deal with it. It’s not an issue just for the West.”

In the case of the diocese of Kondoa in Tanzania, as well as the church in Zanzibar, bishops learned about the difficulties of Christian mission and evangelism in a context where the vast majority of the population is Muslim.

Illustrating the continued impact of the past on the present, speakers from the diocese of Oklahoma in the Episcopal Church described the effects of the forced relocation and disenfranchisement of Indigenous people during the formation of the United States. The Diocese of Liverpool — a major hub for the transatlantic slave trade from the 16th to the 19th century, from which the city derived much of its wealth — described its efforts to promote social justice through the establishment of food banks and by providing advice for getting out of debt and poverty.

The legacy of the slave trade — also visible at last year’s consultation in Richmond, Virginia — has impacted much of West Africa, including Ghana. During the consultation, the bishops journeyed to the Diocese of Cape Coast to visit one of forty “slave castles,” large commercial forts built by European slave traders.

“It was a particularly solemn moment to walk through the ‘gate of no return’ that was the portal through which the slaves were led out to the ships that carried them to North America and to other parts of the world,” Bird said.

“I believe that this experience reinforced in all of us the importance of the work that we have been engaged in that has focused on reconciliation, and the gift we have been given in our common life together.”

Read A Testimony of Unity in Diversity.

Read a historical background to the Bishops in Dialogue Consultations.

Read a paper on the concept of sankofa presented by Prof. Emmanuel Asante.