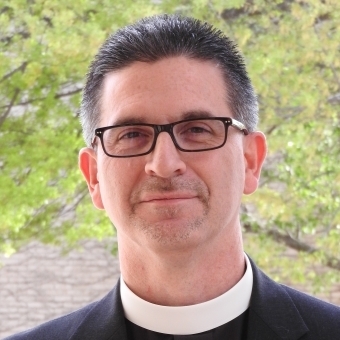 The election was held during a special Electing Convention June 25 at Trinity Episcopal Church in Asheville, North Carolina.

McLoughlin, canon to the ordinary in the Diocese of Oklahoma, was chosen from among four final candidates to lead the Episcopal Church in Western North Carolina, representing 15,000 members in 63 year-round congregations, six summer chapels and two conference centers.

Ordained in 2005, McLoughlin earned his Masters in Divinity from Virginia Theological Seminary and Bachelor of Arts from the University of Central Florida. Prior to his call to the priesthood, McLoughlin worked in the criminal justice field serving in the State of Florida as a police officer and in the U.S. Department of Justice in Washington, D.C. in various capacities, most recently as the special assistant/senior advisor to the assistant attorney general.

McLoughlin and his wife Laurel have been married for 23 years, and together have two children, Alexander, 17, and Alyson, 14. Born in San Juan, Puerto Rico, McLoughlin is bilingual, enjoys music, playing the drums, and studying 18th century American history.

In his nomination profile, McLoughlin wrote, “I think the church today longs for a new type of bishop. A bishop who is truly engaged in the ministry and lives of people within the diocese; engaged in mission and evangelism; a bishop willing to sit with the people of the diocese and explore new ways to be disciples of Christ.”