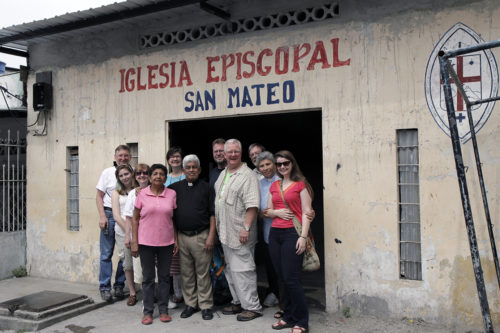 Companions from the Diocese of Tennessee pose for a photo with the Rev. Francisco Orrala and his wife Claudina Pacheco outside St. Matthew’s Episcopal Church in Guayaquil, Diocese of Ecuador Litoral. Photo: Lynette Wilson/Episcopal News Service

[Episcopal News Service – Guayaquil, Ecuador] Like all relationships, companion diocese and parish-to-parish relationships ebb and flow, but for the parishes in the dioceses of Tennessee and Ecuador Litoral, their long-standing relationships have stayed the course and have continued to evolve.

Openness to change and deep listening characterized the Diocese of Tennessee’s most recent visit to the Diocese of Ecuador Litoral, an annual pre-planned visit that took a change of course after a 7.8 magnitude earthquake struck off the central coast, killing hundreds of people, injuring thousands and displacing tens of thousands from their homes north of Guayaquil.

Tennessee companions have made yearly visits to Ecuador since 1998. Over the years they’ve engaged in construction projects, renovations, new buildings and enclosures; facilitated workshops and medical clinics; worshiped and gathered together in fellowship; and have practiced a ministry of presence, particularly during their most recent visit when they heard the stories of earthquake survivors and their families. 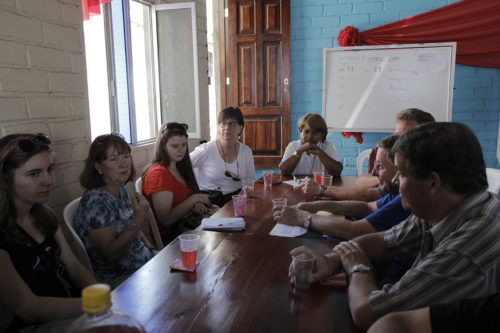 The group met with the Rev. Betty Juarez Villamar, head of the table, at St. Paul’s Episcopal Church in Manta, one of the areas hardest hit by the April 16 earthquake. Photo: Lynette Wilson/Episcopal News Service

Originally, the group of 11 was meant to be twice its size, with some members operating a medical clinic. Instead, the Tennessee companions focused on a ministry of presence, visiting churches in Guayaquil and in Manabí Province, one of the areas hardest hit by the earthquake, a three-and-a-half-hour drive north on the central coast.

To address some of the peoples’ needs, a group of medical professionals from the Episcopal Diocese of Puerto Rico, which operates a health system on the island, joined with local doctors to offer a medical clinic June 15-18 to provide obstetrical and gynecological care, general medicine, pediatrics and psychological care to people in Manabí.

Having the medical needs met by partners from Puerto Rico, which also has a companion relationship with Ecuador Litoral, allowed the companions from Tennessee to sit and listen to people’s stories and their concerns.

“We’re at a crossroads … is there a better way to do things?” said Paul Wholley, a longtime companion and a member of Church of the Good Shepherd in Brentwood, Tennessee, who helps coordinate the three-day mission his church sponsors. “If the earthquake has a silver lining it was that we were able to do a listening tour.”

The dioceses of Tennessee and Ecuador Litoral had an official companionship relationship from 1998 to 2010; now the relationship continues on a parish-to-parish basis, coordinated by a companion committee headed by George Kurz, a member of St. Philip’s Episcopal Church in Nashville.

Two critical things are happening in the Diocese of Ecuador Litoral. It’s developing a long-term plan to respond to the needs of people affected by the earthquake, their physical, emotional wellbeing, rebuilding housing and assisting people to find jobs. The other main focus, which has been ongoing, but is picking up steam, is the diocese’s journey toward self-sustainability for their mission and ministry.

When asked about what his wants, needs and expectations are for companion relationships, Ecuador Litoral Bishop Alfredo Morante said they are many, but that the No. 1 priority is to find partners and companions that can accompany the diocese on its journey to self-sustainability.

Each of the seven dioceses that make up the Episcopal Church’s Province IX – Ecuador Litoral, Ecuador Central, Honduras, Venezuela, Colombia, Puerto Rico and the Dominican Republic – are required to adopt a plan to self-sustainability.

In May, the Province IX bishops formed a province-wide development group during a synod meeting in San Juan, Puerto Rico. The development group’s purpose is to assist with the development and self-sustainability of the diocese through the promotion of sustainable development, the solicitation of resources and the strengthening of companion relationships.

The development group is modeled after the Dominican Development Group, which has helped the Diocese of the Dominican Republic establish an endowment that — along with assistance from the Episcopal Church — has helped secure its future mission and ministry. Much of what the DDG has been able to do has been with the assistance of companions, facilitating more than 50 mission trips annually.

The bishop has long talked about the diocese’s need to become self-sustainable, said Kurz.

“This is not ‘Ecuador Land,’ this is not a theme park,” said Kurz, during an interview in Guayaquil. “I do feel called to be here … and I want to do the best that I can do to be a companion.”

The deacons and the priests in the diocese, Morante said, want the same things he wants, companion relationships that can help to carry them on their journey to self-sustainability and that help them serve their parishes and the surrounding communities. 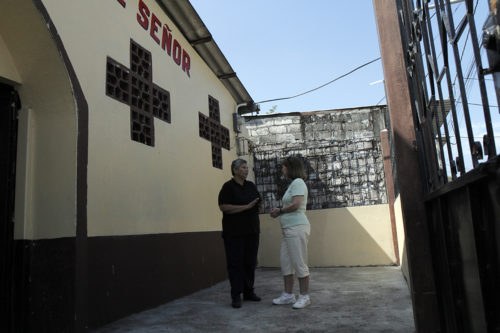 Self-sustainability is something St. Joseph of Arimathea in Hendersonville, Tennessee, is working on with Jesus the Lord, its partner in a working-class area of Guayaquil led by the Rev. Mariana Loor.

“At Jesus el Señor, they have a real talent for empanadas,” said Sarena Pettit, a member of St. Joseph of Arimathea and the Tennessee group’s Spanish-language interpreter, herself a longtime companion.

The church has a window facing the street, which will make window sales easy; the plan is to start small with empanadas and later to expand the operation to include a bakery. With locally raised money and support from the diocese and the Tennessee companions, the church has the seed money to get started, she said.

Over the years Pettit and Loor have become friends: they keep in touch via email and know that they are praying for one another.

“(Our) principal relationship is one of prayer,” said Loor, during a visit to Jesus the Lord, although she also has made a visit to Tennessee. “We have a beautiful relationship and we stay united in the Holy Spirit.”