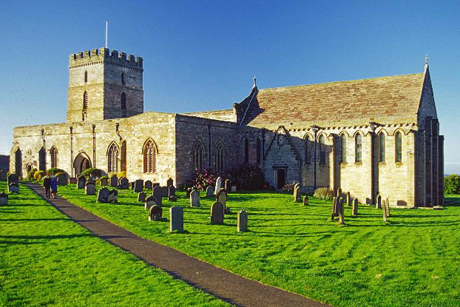 St. Aidan’s Church, Bamburgh, founded by the saint whose name it bears, is the new burial site of 110 Anglo-Saxon Christian converts who may well have heard the saint preach.
Photo: Christine Matthews

[Anglican Communion News Service] The remains of what is said to be some of Britain’s earliest converts to Christianity, which were excavated from sand dunes near Bamburgh Castle in Northumberland between 1998 and 2007, have been re-interred in the crypt of St Aidan’s Church after the completion of a research project led by Durham University and the Bamburgh Heritage Trust.

Some 110 sets of remains were excavated from the Bowl Hole – a known Christian burial site. The re-burial at Saint Aidan’s Church is said to be particularly poignant because the remains have been dated as being from between AD 650 to AD 700 – meaning they would probably have known Saint Aidan and heard him preach.

The Anglo-Saxon saint went to Bamburgh from the holy island of Iona at the request of King Oswald, who wanted his new kingdom of Northumbria evangelized. Saint Aidan’s Church traces its foundation to this time; although no trace of the original wooden church remains except – possibly – for a wooden beam that hangs above the font.

Tradition suggests that this beam supported an awning, under which St Aidan died. A simple shrine marks the spot where this happened. The present church building dates back to the end of the 12th century. It is seen as the mother-church of the modern-day Diocese of Newcastle and central to the foundation of Christianity in England.

The June 26 reinterment service saw the remains, in zinc-lined boxes, placed in a new ossuary in the church’s crypt during a service which included a reading and a prayer in Old English.

“It is incredibly fitting and moving that the final resting place for the skeletons is in the crypt of St. Aidan’s Church,” Jessica Turner, of the Northumberland Coast Area of Outstanding Natural Beauty Partnership, told BBC News. “It is tantalizing to think the some of these people could have actually heard St. Aidan preach on the same site as we know he founded his church here in 635 AD.”