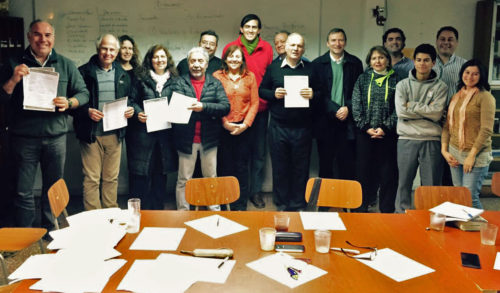 Members of an Chilean Anglican congregation show their work after a self-convening meeting to contribute to the government’s new constitution process. Photo: Anglican Church of Chile

[Anglican Church of Chile] In recent days, the Chilean Government has led a citizen consultation process towards drawing up a new constitution. Given the relevance of this step for the country, the Diocesan Bishop of the Anglican Church of Chile (IACH) and Primate of the Province of South America, Héctor Zavala, made a call to church members to participate and actively be involved in this period of discussion and socialization.

Through an open letter and a media shared video, Zavala encouraged both laity and clergy of the IACH to join in this constitutional process, either by generating information and discussion spaces within their churches or getting involved in some of the consultation bodies promoted by the government.

“As Christians and as citizens, we are called to be part of the processes of social and cultural changes of our nation, and at the same time, to be agents of light and influence in all spheres of our society. Therefore, our role is important in this instance of participation,” he said.

Moreover, the bishop stressed out that although within the church not everybody share the same stance on the mechanisms for consultation, and our participation and involvement can be done from different positions, the whole church unites in the same desire that this new constitution may uphold the Christian heritage maintained since the founding of the Chilean Republic.

“As a church we want our most important legal rule to preserve the values and republican principles which are based in a biblical world-view. This can only be achieved with faith expressing itself through love (Gal 5:6),” Zavala said in his letter.

The right to life and human dignity from the moment of conception; freedom of education and religion; justice and equality for all citizens before the law, among other values, emphasized the bishop, are important to preserve in the new Constitution.

Under the drafting initiative for the new constitution, the Government of Chile gave a deadline of June 28 to collect ideas from the citizenship, either through individual input on the website, or through self-convened meetings.

In response to the bishop’s call, to this date several IACH members have participated in these self-convened discussion meetings to raise the principles that as Christians they want to see included in the new constitution.

See the message from Zavala here.