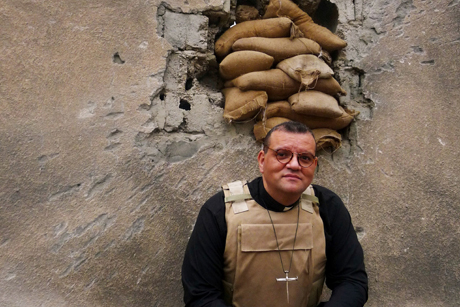 [Anglican Communion News Service] The President of the Foundation for Relief and Reconciliation in the Middle East (FRRME), Canon Andrew White, has been suspended by the charity’s trustees. And the charity itself is the subject of a statutory inquiry by the official regulator of charities in England and Wales, the Charity Commission.

Canon White, the FRRME, and the Charity Commission have all refrained from stating explicitly what the inquiry and suspension relates to; but it is understood to relate to concerns over alleged ransom payments to secure the release of young girls held as sex-slaves by Daesh. If any such payment had been made to Daesh, it would be unlawful in English law.

In a statement, the trustees of FRRME confirmed that Canon White had been suspended with pay pending the outcome of the Charity Commission inquiry. “It would be inappropriate to comment further on an active investigation other than to say that the Foundation believe at this stage that the alleged incident stemmed from a genuine desire by Canon White to help others,” they said, as they confirmed that they were “cooperating fully” with the authorities.

The Charity Commission confirmed that they had launched a statutory inquiry, but said they could not comment further on what was a “live investigation.” They said that once their inquiry is concluded, they would “publish a report detailing what issues the inquiry looked at, what actions were undertaken as part of the inquiry and what the outcomes were.”

Canon White himself said that the inquiry was launched “in response to some inaccurate statements I made about our work with and funding for the former slave girls taken by [Daesh]. What is clear is that at no time did we pay money to any terrorists.”

He asked his supporters to “please pray for us at this very difficult time.”

Andrew White, a former Canon for Reconciliation at Coventry Cathedral, served as the Vicar of Baghdad until he was encouraged to leave the country following advances made by Daesh. He now spends his time travelling between his home in England and bases in Amman and Jerusalem.

In Amman, he works as pastor to a number of Christian families who sought refuge in Jordan after fleeing Daesh’s advances in Iraq. And in Jerusalem he works on reconciliation initiatives between Israelis and Palestinians.

His suspension by FRRME will not affect his preaching and teaching ministry.