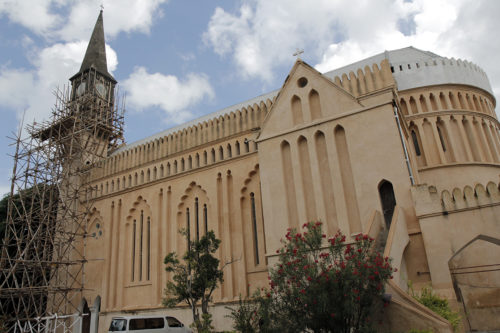 Both the interior and exterior of Christ Church Anglican Cathedral in Zanzibar have undergone a massive restoration. Photo: Lynette Wilson/Episcopal News Service

[Episcopal News Service – Stone Town, Zanzibar] Christ Church Anglican Cathedral stands here as a symbol of remembrance to the men, women and children taken from East Africa and sold into slavery. A massive stone structure just outside the historic city’s narrow streets and corridors, the cathedral also serves as a reminder of the Anglican Church’s role in abolishing the slave trade, and its contribution to the spread of Christianity in Africa.

Designated a UNESCO World Heritage Site in 2000, Stone Town receives more than 100,000 visitors annually, with many of them visiting the cathedral, where guides offer tours of the property built on a former slave market.

In the fall of 2013, the Anglican Diocese of Zanzibar – part of the Anglican Church in Tanzania – in partnership with the World Monuments Fund-Britain began a project to preserve the cathedral and to create a heritage center to commemorate the abolition of slavery and to educate people about slavery in its modern forms.

“The project will preserve a highly significant monument, and promote access to one of the most important heritage places in East Africa,” said Bishop of Zanzibar Michael Hafidh, in an email message. “Telling the story of this dark chapter in the region’s history in an open and factual way will help bridge social and ethnic divides and promote tolerance, reconciliation and an inclusive society.” 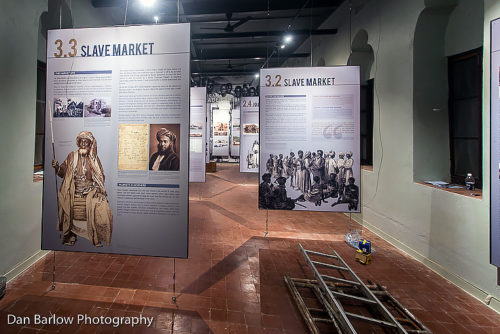 The heritage center will tell the story of the slave trade in East Africa, both in English and Swahili, to promote interfaith dialogue, educate tourists, bridge social and ethnic divides, and teach children about tolerance and reconciliation to promote an inclusive society.

“The process of creating the heritage center … and making it accessible to school children, who are the country’s future leaders, will promote interfaith and intercommunal dialogue and understanding,” wrote Hafidh, whose mother was a Christian and whose father was a Muslim. 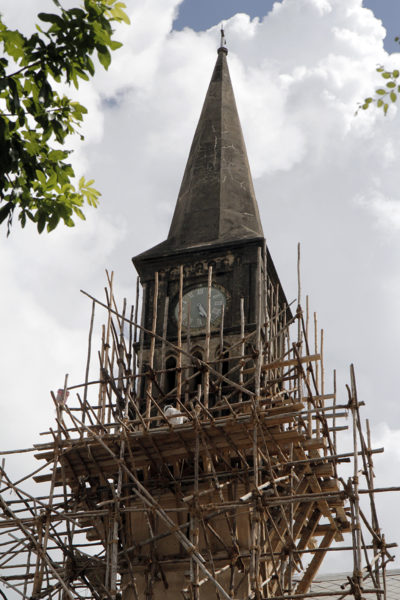 The European Union and the U.S. Ambassador’s Fund for Cultural Preservation, among other donors large and small, provided financial support for the cathedral restoration project. Except for the spire, restoration is complete.

On June 15, the heritage center opened. Featuring an East African Slave Trade Exhibit, it tells the story of slavery and the slave trade beginning with capture in places like Congo, Kenya, Tanganyika, through transport, buyers and sellers, from working the spice plantations and the journey abroad, to freedom and the legacy slavery imparted on Zanzibar, an island archipelago with 1.3 million people, the majority of them Muslim.

“Zanzibar was an important trans-shipment point for slaves coming from the mainland who were either sold on Zanzibar’s slave market to Arab or Swahili plantation owners to work on the spice plantations of the island of Zanzibar or the island next door, Pemba,” said Derek Peterson, a professor of history and African studies at the University of Michigan and a member of St. Andrew’s Episcopal Church in Ann Arbor. “Or sometimes they were also sold in great numbers to dealers who took them around the Cape of Good Hope bound for Brazil.”

The slave trade shifted to East Africa after the British parliament voted to end the West African slave trade and later positioned navy squadrons off the coast to intercept slaving vessels headed for the New World, driving up the price for slaves, said Peterson, who previously taught at Cambridge University in England. The demand for slave labor was high in the Caribbean and Brazil; the latter country didn’t abolish slavery until the late 19th century.

In addition to serving as a memorial to the slaves who were brought to the market, the cathedral also commemorates the work of Scottish explorer and missionary David Livingstone and his efforts to abolish the slave trade.

“The cathedral itself stands as a monument to the abolishment of slavery; however, the Anglican Church in Zanzibar grew out of a long campaign against the slave trade in East Africa inspired by the rhetoric of David Livingstone,” said Peterson.

The dominant Anglican Mission in Zanzibar Island was called the Universities Mission to Central Africa, due in part to abolitionist William Wilberforce and his anti-slavery rhetoric, which he offered repeatedly at Oxford and Cambridge following a trip to Central Africa in the 1850s, inspiring Livingstone.

“He [Livingstone] goes to Cambridge and makes a famous speech at Regent House in which he calls on a generation of British youth to go off to Central Africa and save Africans from the degradations of Arab and Swahili slave traders,” said Peterson.

“Livingstone’s idealistic speech gives rise to a whole mission in UMCA which is populated by enterprising high-minded Anglican students from Oxford and Cambridge and other British universities who sign on and create this Universities Mission to Central Africa whose chief vocation is to create paths for Christianity and commerce, which is what Livingstone wanted to promote.” 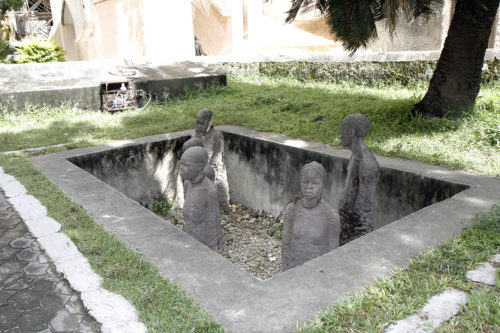 Statues of slaves bound together with chains around their necks serve as a reminder of the atrocities suffered by the men, women and children who were captured and sold into slavery in East Africa. Photo: Lynette Wilson/Episcopal News Service

Following Livingstone’s speech in the 1870s, the UMCA mission was launched in Zanzibar and inland in what is today Malawi, where missionaries opened up stations to accommodate freed slaves, some of whom they purchased and others whom they rescued.

Today’s Anglicans in Zanzibar trace their roots to these freed and emancipated slaves, said James Kaleza, assistant diocesan secretary, during an interview in Stone Town in April.

“Most of the Anglicans in Africa are descendants of slaves because their ancestors were those who were brought here to be sold and ended up at the mission,” said Kaleza. “They became the first Anglicans; most are natives (with roots) that go back to the slave trade.”

The Anglican missionaries not only brought the Gospel in Zanzibar and the mainland, where it began to grow more quickly, but they built hospitals and schools where they trained doctors, nurses, teachers and priests, he added. 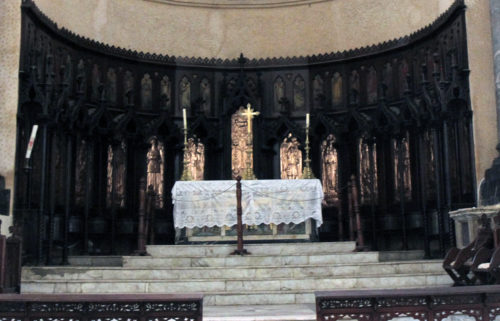 Anglicanism continued to grow slowly in Zanzibar until the revolution in 1964 when the sultan of Zanzibar was removed from power and the new government took over the schools and the hospital and the headquarters. It was at that time that the church moved its headquarters to the mainland, closing down its schools and hospitals. The church’s presence on the island weakened and its buildings, including the cathedral, fell into disrepair, said Kaleza.

“It stayed that way until the 1990s; then the government changed the policy that the private sector could continue schooling,” he said, adding that Diocese of Zanzibar returned its authority to the island. “The diocese was reinaugurated in 2001.”

A rededication of the restored Christ Church Anglican Cathedral will take place later this year or in early 2017.

Today, more than 95 percent of the people who live in Zanzibar are Muslim. Religious minorities include pagans; Hindus; and Christians, 2.5 to 3 percent, including Roman Catholics, Anglicans, Lutherans and Pentecostals. And despite the prevailing narrative, Arabs were not the only slave owners. It was possible for black Africans to rise in class ranks and they themselves owned slaves.

Slavery in East Africa didn’t mirror the kind of large-scale plantation slavery in the United States, where people were bound and obliged to work in inhuman conditions, said Peterson.

“In East Africa slaves could also be artisans, they could be businessmen, they could go into jobs of their own and remit a portion of their profits to their owner. But they could be very enterprising in their work,” he said, adding that that kind of slavery continued to exist through the 19th century. 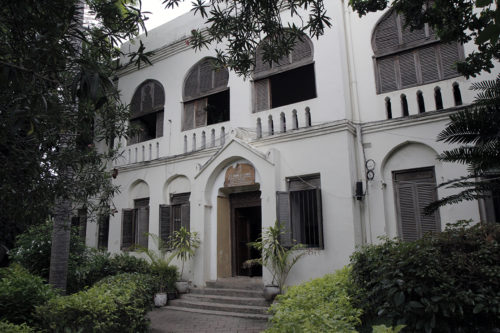 St. Monica’s Lodge is a hostel on the cathedral’s property that can accommodate groups. Photo: Lynette Wilson/Episcopal News Service

The British Parliament passed the Abolition of Slavery Act in 1833, abolishing the practice of slavery in all British territories; Zanzibar remained a British protectorate ruled by an Omani sultanate until more than a century later. In 1963, Britain granted Zanzibar its freedom, and a revolution occurred in January of 1964.  (Later that year, Tanganyika, a former British and Germany colony, and Zanzibar united to form Tanzania.)

“In 1964 that sultanate is overthrown by a group of populist political campaigners who call themselves ‘black Africans,’ … and they say they are fighting a race war, that they are overthrowing an unelected Islamic Arab aristocracy that has oppressed black Africans,” said Peterson. “And so the terms of the 1964 revolution were fought pretty much on terms of race  …  that is why today when you ask about the slave trade, it’s always – in Zanzibar – defined as a racial problem.”

“Black Africans could and did become slave owners themselves by becoming Muslims, by associating themselves with the sides of civilization and hierarchy on the coast and would climb a social ladder that was not assigned by race but rather by civilizational attainment,” said Peterson.

“The ability to speak Swahili, to command the signs of civilization, to dress the appropriate way … East Africa’s slave economy was a very complicated place in which there wasn’t a clearly defined slave-owning class and neither was there a clearly defined class of who were slaves. It was a much more open economy and negotiation in which everybody involved was engaged in a dynamic social group.”

The heritage center, in some ways, seeks also to set straight the record and propagate reconciliation.

The history of the slave trade has been taught in Zanzibar in a way that blames Arabs, and by association, Islam, said the Rev. Nuhu Sallanya, director for Cultural Heritage Centre, in an email message.

“The truth is the slave trade in East Africa involved Arabs, Indians, Africans, and local leaders like chiefs,” he added. “So telling the story of this dark chapter in the region’s history in an open and factual way … will help bridge social and ethnic divides and promote tolerance, reconciliation and an inclusive society.”