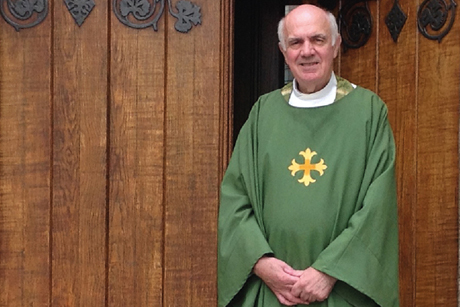 Canon Malcolm Bradshaw was awarded the MBE in recognition of his “services to interfaith understanding and community charities in Greece”. Photo: St. Paul’s Anglican Church, Athens

[Anglican Communion News Service] The chaplain of the Anglican Church in Greater Athens, the Rev. Canon Malcolm Bradshaw, was presented with one of the U.K.’s civil honors by Princess Anne, the Princess Royal, during a June 22 ceremony at Buckingham Palace, the Royal Family’s London home.

Bradshaw was awarded the MBE – a Member of the Most Excellent Order of the British Empire – in the Queen’s annual New Year’s Honors list in December following his work with the thousands of refugees arriving in Athens from North Africa, Syria and Afghanistan in search of sanctuary in Greece.

With the congregation of St. Paul’s Anglican Church in Athens, Bradshaw has worked with agencies such as the Anglican mission agency the United Society and other denominations such as the Salvation Army to provide supplies of food and water, clothing and advice to young and old who have arrived and are bewildered about where to go.

Bradshaw’s MBE was also in recognition of his work “as a powerful ambassador for relief work,” the Diocese in Europe said. He has spoken on this topic to the Church of England’s General Synod and at the U.K.’s Christian arts festival Greenbelt.

“We rejoice with Malcolm on this happy day for him and his family,” the Bishop of Gibraltar in Europe, the Rt. Rev. Robert Innes, said. “Many of our congregations across Europe know of Malcolm’s tireless work with refugees and his organizational skills in working with other agencies in Athens.

“I am also impressed by his quiet determination and humility in ministry to people in need of food and shelter. It demonstrates the Gospel in action. Today’s award is richly deserved.”

When the award was announced in December, the Suffragan Bishop in Europe, the Rt. Rev. David Hamid, said, “It is a most fitting award recognizing Father Malcolm’s outstanding achievements and extraordinary service particularly during this time of financial hardship facing the Greek people and the huge numbers of refugees arriving in Greece and transiting through the country.

“Father Malcolm has been instrumental in bringing together Churches and other groups to work together to address these challenges.

“When I spoke to him on the telephone to congratulate him, Father Malcolm said, humbly, ‘but none of this could have been achieved without the collaboration and cooperation of others.’ That is true, of course, but it was Malcolm’s drive, passion and vision that harnessed this collaboration. For that, this honor is most fitting.

“The members of the diocese as well as ecumenical partners I am sure will join me in sending our congratulations to Malcolm and expressing our joy at this recognition by HM Government.”