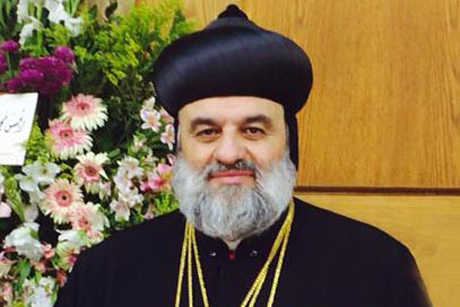 [Anglican Communion News Service] An assassination attempt on Patriarch Ignatius Aphrem II Karim of the Syriac Orthodox Church has been condemned by the former bishop of the Church of England’s Diocese of Guildford, the Rt. Rev. Christopher Hill.

Three members of the security forces were killed and another five injured when a suicide bomber detonated his bomb outside St. Gabriel’s Church in the al-Wusta district of Qamishli in north-east Syria. The bomber, disguised as a priest, had tried to enter the church as the congregation commemorated the Assyrian genocide on the Orthodox Pentecost Sunday at the weekend; but he was stopped by the security personnel when he detonated his bomb. It was the fourth attack against Assyrian Christians in the city in the past six months.

“I am shocked and horrified to learn of the assassination attempt,” Hill, president of the Conference of European Churches (CEC), said. “CEC grieves the loss of life and prays for the recovery of the wounded. We extend our prayers and support for the church and all Christians in threatened positions in the Middle East.”

The CEC general secretary, Fr. Heikki Huttunen, said: “Despite killing other people, the assassin could not achieve their goal. We thank God that the patriarch is able to continue in his apostolic and pastoral mission. May he be guided, strengthened, and consoled by the Spirit of Pentecost.”

In a statement, CEC said that “along with Armenians, Greeks, and other ethnic groups in the region, Syriac Christians have survived genocide and oppression over the course of centuries. We are now witnessing yet another wave of persecution and murder against these Christians and other indigenous religious and ethnic communities in the Middle East.

“As Europeans we must learn more about these events and work to protect people from persecution, murder, and genocide. We must contribute to the building of peace and justice for all religious and ethnic communities of Syria, Iraq, and the entire Middle East. Our hearts, our homes, our societies must be open to all those who flee violence and persecution.”

The general secretary of the World Council of Churches, the Rev. Olav Fykse Tveit, broke away from its executive committee meeting in Trondheim, Norway, to give his reaction to the assassination attempt. “We are shocked by the news of this attack, apparently targeting the head of the Syriac Orthodox Church in the church’s own homeland,” he said.

“It was an action of terror and violence to Christian communities. I condemn the ideology and intentions behind this attack, and call for prayer and support for the members and leaders of all religious minority communities in the region who are increasingly threatened and attacked,” he added. “While we thank God that Patriarch Aphrem was not harmed in this attack, our thoughts and prayers are especially for the families of those who lost their lives while protecting others from harm, and for the healing and recovery and healing of those who were wounded.”

The attack was also condemned by the Christian Conference of Asia. Its general secretary, Mathews George Chunakara, said that “the CCA is deeply saddened by this unfortunate event and we share the concern of all those peace loving people and communities in Asia and around the world as we pray for the blessed life and continued leadership of the Patriarch who works for sustained peace in the Middle East region.

“The ongoing violence by terrorist groups against the minority Christian communities in Syria and other parts of the Middle East is a serious concern. It is unfortunate that a series of five suicide bomber attacks against the Assyrian minorities in Syria took place in the past six months. The terrorist attack against any religious and cultural minority is deplorable and the international community should act collectively to stop the ongoing terrorist attacks in the Middle East.

“It is unfortunate that a large number of Christians in the homelands where Christianity was born and rooted have already left their ancestral homes and lands as they are unable to survive because of their faith and religious identity” he added.