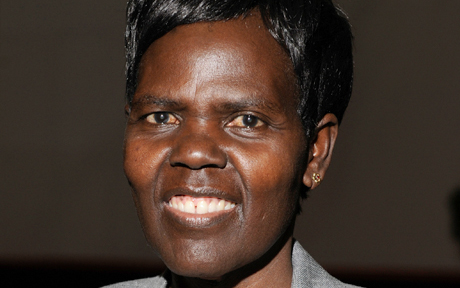 Dr. Agnes Abuom from the Anglican Church of Kenya is moderator of the World Council of Churches. Photo: WCC

[Anglican Communion News Service] The Anglican moderator of the World Council of Churches (WCC) has called on the church to move away from nostalgia and consider how to become catalysts of a moral force in a world beset by injustice, inequality and rising xenophobia.

Dr. Agnes Abuom, from Nairobi in Kenya, told the WCC’s Central Committee in Norway that it was time to move from rhetoric to action and walk together with people who are denied justice.

“The witness of many in the forefront of struggles demand that we move away from the culture of conferences and statements and begin to get engaged in actions that nurture hope and alternatives,” she said.

“There is room in the gospel for disagreement but there is no room for disengagement,” Abuom added. “Pilgrimage is about hope breaking into our present, motivating us to move forward, overcoming hurdles …We need to move from the nostalgia of the past, set aside our burdensome preoccupations and instruments that have outlived their purpose and venture into new and relevant areas of engagement.”

Abuom praised the church for engaging in the migration crisis in Europe. She said it was ironic that powerful nations and former colonial powers seem to be more affected by what she called the “fear of the other.”

“There doesn’t seem to be a place that is free of xenophobia and the consequential violence against minorities, migrants and refugees, many of whom are victims of war and poverty,” she said. “The images of rejection and mistreatment of millions fleeing from war and violence in recent times are still fresh in our minds. I commend the churches of Europe for their sensitive and generous response and their great witness, even if it meant facing the ire of their governments and the majority.”

Abuom said the church had great responsibility and needed to be actively engaged in renouncing values and attitudes that glorified power. She said it had to denounce systems and cultures that diminished and denied life. The church needed to be holding to account international financial institutions, military powers, industry and political systems – rather than opting to be their endorsing agents.

She said pilgrimage offered the church immense possibilities to reimagine itself as a movement of God’s people in mission – open and agile and receptive to the promptings of the Spirit.

One hundred and fifty members of the WCC are attending the weeklong conference in Trondheim under the theme of Pilgrimage. Issues under discussion include justice and peace, the Middle East, religion and violence, and children’s rights.