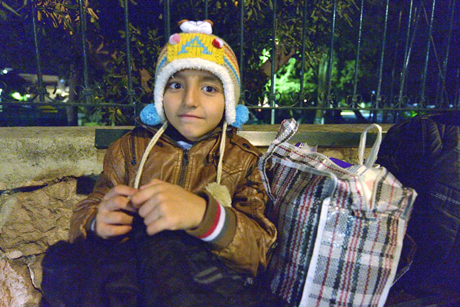 It is easy to forget that the 65.3 million refugees are individual people – like six-year-old Taim, who crossed the Aegean Sea last year with his family, landing on the Greek island of Chios. Photo: Jeffrey / ACT Alliance

[Anglican Communion News Service] The number of people displaced from their homes by war and persecution hit a record-breaking 65.3 million people by the end of 2015, the UN said today in a report released to mark World Refugee Day. Not only is the total number of refugees at record levels, but the year-on-year increase is also extraordinary – at the end of 2014, the figure stood at 59.5 million – another record-high.

“At sea, a frightening number of refugees and migrants are dying each year,” the UN High Commissioner for Refugees, Filippo Grandi, saod. “On land, people fleeing war are finding their way blocked by closed borders.

“More people are being displaced by war and persecution and that’s worrying in itself, but the factors that endanger refugees are multiplying too.

“The willingness of nations to work together not just for refugees but for the collective human interest is what’s being tested today, and it’s this spirit of unity that badly needs to prevail,” he said.

Throughout the world, Anglicans are at the forefront of care for refugees through many different projects and initiatives.

In Egypt, Cairo’s Anglican cathedral houses the Refugee Egypt project supporting some of the hundreds of thousands of refugees who are making a new home in the city. Their work is supported by the Primates’ World Relief and Development Fund (PWRDF) of Canada – including through a $30,000 (CAD, approximately £16,000 GBP) donation raised through a coast-to-coast cycle ride.

“For refugees who have had to leave everything behind and flee for their lives from violence or persecution, finding a place of safety, a new home, can feel like a God-send,” PWRDF said. “But even when they have arrived at a haven, refugees are often restricted in their ability to work, go to school, or even access medical care. . .

“A Sudanese refugee brought his nine-month old daughter in to a Refuge Egypt health clinic. His daughter was feverish and clearly needed to be admitted to the hospital. The man explained that he couldn’t take his daughter to the hospital – his wife had died in an accident in the winter, leaving him with seven children to care for. His 12-year-old daughter was the only assistance he had.

“If he took time off from his job to stay with the baby in the hospital, no one could care for the other children, and he would lose his income for all those days – money his children needed.

“Refuge Egypt helped the man’s 12-year old daughter to care for his sick infant. Every day she brought the baby back to the clinic for treatment, and so that she could continue to learn how to care for the baby. With the care of her older sister, the support of Refuge Egypt, and the grace of God, the baby was completely cured of her illness.”

In the UK, the former Archbishop of Canterbury Rowan Williams, in his role as chairman of the ecumenical development agency Christian Aid, gave an interview to the BBC in which he challenged the “unfounded” claims by some that the UK is “full” and so unable to accept more refugees.

“Desperate people who have been driven out of their homes by war are being forced to make dangerous journeys in search of sanctuary,” he said. “Yet many countries are closing their borders and putting up barbed wire. The UK must not turn a blind eye to this crisis. We can and must do more to respond.”

He said that people making “unfounded” claims that the country is full “fail to recognise the positive, life-affirming contributions that generations of refugees have made to British society – and that we ourselves are changed by welcoming the stranger.”

His sentiments were echoed by the Presiding Bishop of the US-based Episcopal Church, the Most Revd Michael Curry.

“In the late 1930s the world found itself on the verge of what became a terrible war, the Second World War”, he said. “Millions of refugees were fleeing from Europe and fleeing around the world seeking asylum and safe haven.

“In 1938 the Episcopal Church published this poster with the depiction of Mary, Joseph, and the infant Jesus, and it read, ‘In the name of these refugees,’ referring to Mary, Joseph and Jesus, ‘Aid all refugees.’

“The United Nations is now asking the peoples of the Earth, of all religious stripes and types, to once again come to the aid of those who are refugees. . .

“We must find a way to end war, but we must find a way to end the suffering of human beings who are forced from their homes. So I encourage you to support United Nations World Refugee Day. And do anything that you can do to bring an end to the unhappy lot for many so that they may find life as Jesus said, and have it more abundantly.”

World Refugee Day is the start of Refugee Week – seven days of activism to raise awareness of the needs of displaced people. But for 70 New Zealanders, it is the end of a five-day Operation Refugee challenge. During it, the participants agreed to live of a typical refugee’s rations. Through it, they have raised nearly $30,000 (NZD, approximately £14,500 GBP) towards Christian World Service’s work with refugees from Syria.

“Funds forwarded to Christian World Service’s Syria Appeal will help keep open a lifeline for Syrian refugees in Jordan and Lebanon,” Anglican Taonga said. “And over the next six weeks, every dollar given to CWS for the Syria Appeal will double in value, as the New Zealand Government has pledged to match all gifts given before 1 August.”