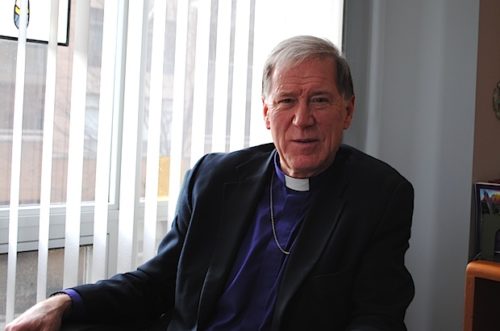 [Anglican Journal] With General Synod set to begin in exactly three weeks, Archbishop Fred Hiltz, primate of the Anglican Church of Canada, says he’s heartened by the interest and prayers of Anglicans.

“I am much encouraged by the interest of the whole church in this gathering of Synod,” the primate says in a statement released Thursday, June 16. “I am also very grateful for the prayers with which we will be upheld.”

In addition to requests from bishops to have prayers for General Synod included among the Prayers of the People at all Sunday and midweek liturgies, a number of parishes have also organized prayer vigils, the primate said, and both individuals and groups of people intend to pray throughout the meeting of General Synod, July 7-12. The knowledge of this, says Hiltz, leaves him  “deeply moved.”

“How blessed we are to have people so deeply committed to calling the Holy Spirit to come and preside, to lead and guide us in Synod,” Hiltz says.

In his statement, the primate also discusses the theme of General Synod 2016, “You are my witnesses,” a phrase from the book of Isaiah.

This theme, the primate says, “has about it the ring of invitation and instruction. It speaks to the very manner in which we are called to be engaged with one another in the work of Synod, some of which is a joy and a delight, some of which is a challenge and struggle.”

Hiltz says he looks forward especially to Sunday, July 10, which will be entirely devoted to Indigenous ministries. He also mentions what he says will be “one of the great struggles” of this synod—its “wrestling” with a proposal to change the marriage canon to allow same-sex marriages. He briefly refers to some of the other business synod will be occupied with, and some of the guests expected to attend.

The message concludes with the primate’s own prayer for General Synod.

The primate’s message echoes to some extent a video reflection released earlier this spring, in which Hiltz said he hoped for a “prayerful spirit” at General Synod, despite tensions expected in discussions around same-sex marriage.