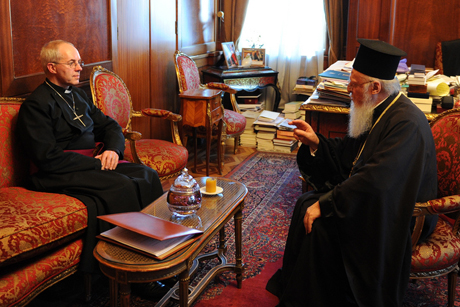 The Archbishop of Canterbury Justin Welby and the Ecumenical Patriarch Bartholomew during a meeting in Istanbul in January 2014. Archbishop Welby has called on Anglicans to pray for the Orthodox Churches Holy and Great Council which is getting underway in Crete. Photo: Lambeth Palace

[Anglican Communion News Service] The long-planned Holy and Great Council of the Orthodox churches is getting underway in Crete; despite the absence of a number of churches over un-resolved differences. The Archbishop of Canterbury, Justin Welby, has urged Anglicans to pray for the gathering.

It is the first Holy and Great Council of the self-governing Orthodox churches in more than 1,000 years. The last recognised Council took place in AD787 before the Great Schism between the Orthodox and Roman Catholic churches. Agenda planning for this month’s meeting has been taking place for over half a century.

The Ecumenical Patriarch, His All Holiness Bartholomew, arrived in Crete yesterday. Many more Primates and leaders of the Orthodox churches arrived today for the historic meeting which is taking place at the Orthodox Academy of Crete.

The World Council of Churches’ (WCC) general secretary, the Revd Dr Olav Fykse Tveit, will join the gathered Primates and church leaders for the Orthodox Pentecost celebrations on Sunday. The WCC report that “Several churches recently decided not to attend the council, citing unresolved issues with the planned documents brought for approval, as well as other unresolved issues, though the situation remains fluid.”

Organisers have invited those churches unhappy with the meeting to gather for a pre-conciliar meeting tomorrow before the Council formally gets underway after Pentecost.

Items expected to be discussed during the meeting, which continues until 27 June, include contemporary mission, marriage regulations, fasting guidelines, the place of Orthodox churches outside their historic venues, and ecumenical relations with non-Orthodox churches.

In a message to Anglican Primates earlier this year, Archbishop Welby said that he had assured Patriarch Bartholomew of his prayers and asked for Anglicans around the Communion to pray for the gathering. “At the Primates’ meeting and gathering in Canterbury this past January, all of us who were there were deeply aware of the prayers for our work not only from Anglicans around the world, but also from our ecumenical friends,” Archbishop Welby said. “The many messages and gestures of prayerful support received from leaders and other Christians was one of the many graces of that time in Canterbury.”

He continued: “I most respectfully request that you and Anglicans around the world join me in prayer for the guidance and blessing of the Holy Spirit upon the leaders of Orthodox Church. . . Remember them in your daily prayers. Pray for them especially at the celebrations of the Holy Eucharist in cathedral, parish, monastic and other communities. Such prayer for one another is most effective, and is a profound expression of love and solidarity within the Body of Christ.”