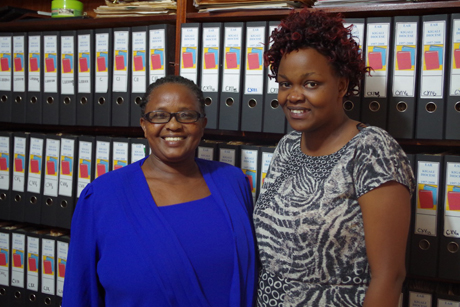 Juliette Mukankwiro and Dinah Igiraneza, part of the Kigali archive team, pose in front of some of the material they have sorted and stored. Photo: Jesse Zink

[Anglican Communion News Service] A new archive in the Diocese of Kigali is allowing Anglicans the opportunity to learn more about the history of the church in Rwanda.

In early 2015, a small group of people began wading through years of old files and papers that were kept in a shipping container near the diocesan offices. The team spent much of their time cleaning and dusting off the paperwork and then bringing it into a special room prepared for this purpose. There, over a period of about nine weeks concentrated work, they sorted the material by subject and time period and filed it in new binders.

Juliette Mukankwiro, a parishioner at St Peter’s Church in the Remera neighbourhood of Kigali, coordinated the project. She recalled that “it was exhausting work and mentally tiring. But we felt really satisfied because we were serving the church that we belong to.”

By day, Mukankwiro works at the Ministry of Agriculture where an important part of her job is keeping track of records so she was well prepared for this task.

The collection – which is in French, Kinyarwanda, and English – is now stored in close to 200 binders, with a small amount of material still unsorted. The material represents a remarkable range of Rwandan ecclesial, social, and political history. It begins with the arrival of Anglican missionaries in Kigali in the 1940s and stretches to the present day. It includes minutes of Mothers’ Union meetings over the decades, correspondence of church leaders with local government officials, parochial reports and statistics of church attendance, reports on the church’s work of reconciliation after the 1994 genocide, and much, much else.

Mukankwiro was delighted to find the deed of land in which a local chief granted to Anglican missionaries the land on which her Remera parish church now sits. Dating to 1948, the deed has a hand-drawn map showing the plot of land and the chief’s thumbprint in lieu of a signature. “People have forgotten this history,” she said. “We can now remember these people who helped build our churches.”

Because the Diocese of Kigali was once the only diocese in Rwanda, there are documents from around the country. There are also documents related to the life of the former province of Rwanda, Burundi, and Boga-Zaire and its division into three in the early 1990s. Preparatory documents for various Lambeth Conferences are contained in the archive, as is correspondence between Rwandan church leaders and the Anglican Communion Office during periods of painful church conflict before and after the genocide.

The project had the support of the diocesan bishop Louis Muvunyi, as well as the support of Kigali’s link diocese, Ely, in the Church of England, which contributed towards the cost of the project. The diocese is currently considering ways to develop the collection further, including how to continue to add new material and make it available to researchers and others.

The archive team created a catalogue to the various binders, which details what is in each. A copy of the catalogue is kept in the diocesan office. A separate copy is now also kept at the Cambridge Centre for Christianity Worldwide in England.

Mukankwiro thinks that the church’s past is important for the church’s life today: “The church in the past had people who had the life of the church at their heart. People today can learn a lot from the faith others used to have.”