The Gatherers Around the Table work on their journal quilt projects at a recent gathering at Calvary Episcopal Church in Charleston, South Carolina. Photo: Don West.

[The Episcopal Church in South Carolina] It’s a June evening in Charleston, and the back door of the church is unlocked. People come in at their own pace, embracing, smiling, setting down plates of cookies on the big table in the parish hall.

No one speaks of it yet, but on everyone’s mind is a June evening in Charleston almost one year earlier, when nine people were shot dead just a mile away at Emanuel AME Church, in an African-American congregation that opened its doors and invited the killer into their weekly Bible study.

The horror of June 17, 2015, and the days that followed gave way to deep grief, and deep questions. How could this have happened? What could I be doing to change that? How can we find bridges across the barriers of race?

Every Tuesday night, a small group from two local Episcopal churches, East Cooper and Calvary, have been meeting to see if they can find some answers. The name they have given themselves reflects the simple agenda for the group: “Gatherers Around the Table.”

After the massacre at Mother Emanuel, the Episcopal Church in South Carolina accelerated its plan to offer anti-racism training for the diocese – training that is required by Episcopal Church canons, but was never offered until a rift in 2012 brought new leadership. Bishop Charles G. vonRosenberg, who took office in January 2013, immediately put anti-racism training on his short-list of needs for the reorganizing diocese, and the first one was on the calendar when the Emanuel tragedy struck. 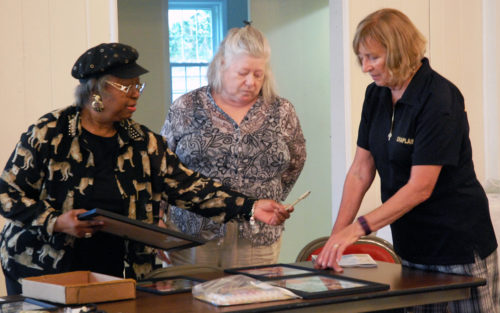 In September 2015, Calvary hosted one of four “Traces of the Trade” conferences offered around the diocese. Each event encouraged people to open their minds and hearts to conversations about the legacy of slavery and racism.

Judith Ewing, an Episcopal deacon who serves at East Cooper, was at the Calvary program. “I realized how ignorant I was,” she said. “I realized the importance of relationships, of just getting to know each other. I just knew we needed to gather at the table.”

She quickly sought out the Rev. Michael Burton, a supply priest at Calvary, about setting up an initial gathering. The first one happened in October with six people from each congregation who committed to meeting every Tuesday for a trial run of six weeks.

Like Emanuel, Calvary has deep roots in Charleston’s history, founded in 1847 for “religious instruction” of enslaved African-Americans. For years, it housed the only preschool and kindergarten for African-American children on the Charleston peninsula, and many leaders passed through its doors. The first black jurist to serve on an appellate court in the United States, Jonathan Jasper Wright, was buried in its churchyard in 1885.

By comparison, the East Cooper Episcopal Church is in its infancy. Approved as a new mission congregation at Diocesan Convention in 2014, it serves the predominantly white suburbs across the Cooper River from Charleston. It was formed by Episcopalians who were left without a place to worship when churches in that area went with the breakaway group that left the Episcopal Church in 2012.

With widely different backgrounds, the two groups shared one common characteristic: Curiosity, and a desire to learn about each other.

Their first meeting was planned as a simple Bible study, “because that would be sweet and safe and nobody would say anything that will upset anybody,” Ewing said. “But I said, ‘Maybe we need to say things that upset people.’”

Artist and educator Marlene O’Bryant-Seabrook was there, and had the same reaction. Ewing recalls her saying: “I’ve been to many Bible studies, and nobody ever mentions the elephant in the middle of the room. Why can’t we mention the elephant in the room?”

Eight months later, the elephant is still loose. Trayvon Martin and Freddie Gray. The challenges of growing up in a mixed-race family. Assumptions about intelligence. Co-workers who act friendly, but never get close. The Spoleto production of “Porgy and Bess.” Ethnic foods they like and dislike. It’s all on the table when they gather.

“We’ve never put aside anything, or say ‘We mustn’t talk about that.’ We talk about everything,” Deacon Ewing says.

Along the way, others have joined. One member recently moved from New York after years in churches that were active in social justice issues, looking for a community in Charleston where that could keep happening. Another regular Gatherer is a social worker from another church who came with an East Cooper friend.  “I thought I knew almost everything about black culture, especially in Charleston,” she says, laughing. “But I don’t.”

O’Bryant-Seabrook, a Calvary member in her 80s, has become the group’s matriarch and historian. On the recent Tuesday night in June, she gave them all an assignment: Come up with a personal statement about why they came to be “Gatherers Around the Table,” and then create a small journal-quilt to illustrate it. A few skeptical looks were exchanged around the table, but the group quickly warmed up to the task of explaining why they come to the meetings week after week.

The Tuesday before the Emanuel anniversary, they were putting the final touches on their letter-sized pieces of fabric art filled with color, symbols, and words like “Curious,” “Sharing,” “Understanding,” “Love,” and “Hope.” Beside an image of Emanuel, one proclaims: “Hate Will Not Win!”

As a child growing up in Charleston, O’Bryant-Seabrook says, “I could not go three blocks without passing a church. I remember asking my mother, ‘I would like to know what they’re praying for.’ With all the inequities and oppression, I wondered, were they praying for something that black churches were not praying for?”

As the members of the group went around the room, the words “safe place” came up again and again.

“When we started, we said we weren’t’ going to judge, or say “You shouldn’t be saying that,” Ewing said. “We were going to accept each one in our knowledge and our ignorance, and love each other anyway.”

As the gathering wraps up, the group continues to share their ideas as they pass the plates of cookies around the table. “When you eat with somebody, it changes the whole dynamic,” one woman says. “It gives me a lot of hope.”

In the words of Anne Nietert’s journal quilt: “Anger exploded into the Palmetto night, but, in the shadows, a new day is dawning as we Gather at the Table to learn, to listen, and to love.”

– Holly Behre is director of communications for the Episcopal Church in South Carolina.