The event occurred on the evening of the same day in which 50 people were killed and 53 injured in the early morning hours at Pulse, an LGBT nightclub in Orlando, Florida. 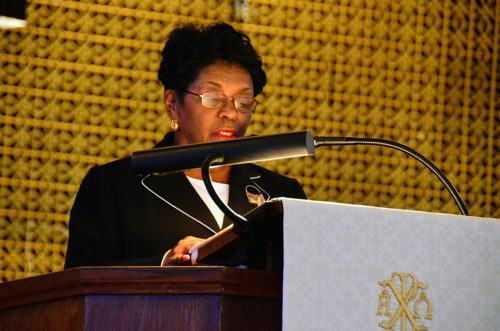 Diane Pollard, chair of the 2015 House of Deputies Committee on Social Justice and U.S. Policy, speaking during the June 12 service. She attended on behalf of Presiding Bishop Michael Curry and the Rev. Gay Clark Jennings, president of the House of Deputies. Photo: Katie Forsyth/Diocese of Eastern Michigan

The service, titled “A Memorial in Remembrance of Mother Emanuel Church,” was held at Bethel AME Church in Detroit and additionally was sponsored by the Episcopal Peace Fellowship and Oak Grove AME.

Eight speakers from several denominations including Episcopal, AME, Baptist, and Roman Catholic processed into the sanctuary to an instrumental version of “We Shall Overcome” before each offered a reading and reflection touching on the murders in Charleston, Orlando and others in recent memory.

The Rev. Phil Cooke, a Jesuit priest who serves as the director of social entrepreneurship at the University of Detroit Mercy, spoke early in the vigil and expressed his frustration saying, “I’m sick and tired and sad and angry…We have people thinking that walls and division and hate will make our country better.”

Cooke and many others focused on the extraordinary forgiveness shown by the family and survivors of Mother Emanuel AME toward Dylann Roof, the shooter that killed nine members of the church during a Bible study on June 17, 2015.

“We are gathered here from many different denominations, but we are walking one path,” said the Rev. Robert Brumfield, pastor of Oak Grove AME. “We are here to remember the lives lost and to lift up the legacy of their families who exhibited faith and strength in being able to forgive.” 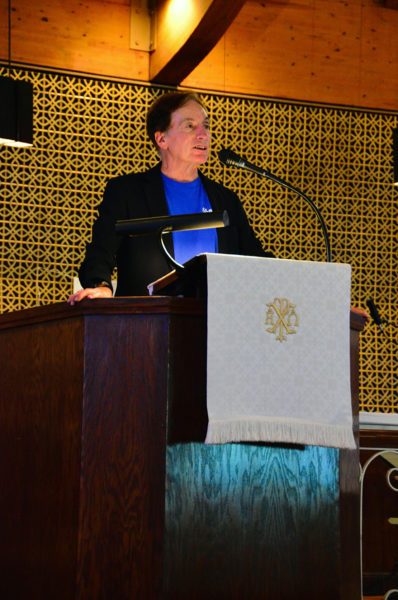 Bob Lotz, co-facilitator of the event and member of the National Executive Council of the Episcopal Peace Fellowship, speaking on June 12 during a service to remember the nine people killed in June 2015 Mother Emanuel AME in Charleston, South Carolina. Photo: Katie Forsyth/Diocese of Eastern Michigan

Bob Lotz, co-facilitator of the event and member of the National Executive Council of the Episcopal Peace Fellowship, called the congregation to follow the way of Jesus saying, “We live in silos of self but Jesus doesn’t want that. He calls us to live in a counter-cultural way of loving neighbors as ourselves. That’s not individualism, that’s community… We called this [memorial] to be a commemoration of the Christian love shown in Charleston so that we may have the strength to be that love in our own communities.”

The Rev. Alice Patterson, pastor of Trinity AME, called on those gathered to take action, “Church, we’ve got work to do. This is our moment and the Gospel is our memo.”

Diane Pollard, chair of the 2015 House of Deputies Committee on Social Justice and United States Policy, attended the service and spoke on behalf of Presiding Bishop Michael Curry and the Rev. Gay Clark Jennings, president of the House of Deputies.

She began by dedicating her words to those killed in Orlando earlier that day and went on to describe the work of the Episcopal Church in the immediate aftermath of the shooting in Charleston as they gathered in Salt Lake City days later for the 78th General Convention. She continued, detailing the ongoing work of the church and its leadership to combat violence and racism through “prayer, teaching, engagement and action.”

Pollard concluded by reading aloud a letter written for the gathering by Curry and Jennings.

The vigil also included a liturgical dance presentation to Common and John Legend’s “Glory” written for the 2014 movie, Selma, and the debut of a song titled “Nine Lives,” written by Sanchez Harley for the nine killed at Mother Emanuel AME in Charleston.

An offering was taken to be split between St. Paul’s Episcopal Church and Quinn Chapel AME in Flint, Michigan, to support ongoing water relief work.

Lotz concluded the event by thanking the facilitators and participants before sending them out with a Benedictine blessing, calling for justice, freedom and peace and for the community to share in the work.

– Katie Forsyth is the Director of Communications and Public Engagement for the Episcopal Diocese of Eastern Michigan.