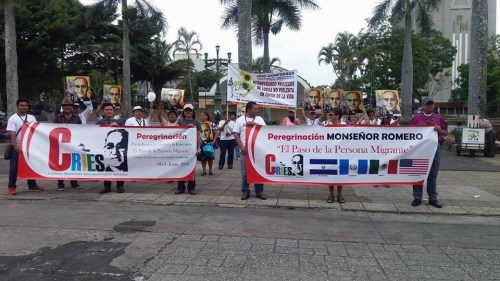 The pilgrims marching in Guatemala City.

[Episcopal News Service] “Migration isn’t a crime, it’s a human right,” said Bishop of El Salvador David Alvarado. He and 18 others participated in the so-called “Msgr. Romero Pilgrimage, the Migrant’s Passage” that followed the route undocumented migrants take from Central America to the United States.

Members of the Episcopal Church of El Salvador, together with an ecumenical group, traveled the route taken by undocumented immigrants in order to promote human rights.

The initiative came out of the Romerist Intersectoral Council of El Salvador (Consejo Romerista Intersectorial de El Salvador—CRIES), an ecumenical group united by the witness of Oscar Romero, the Roman Catholic archbishop assassinated in 1980 after his constant denunciations of social injustice during the Salvadoran civil war.

The Vatican beatified Romero on May 23, 2015, and CRIES organized the pilgrimage to commemorate the first anniversary of his beatification. The group traveled with relics of the Blessed Romero given by the Roman Catholic Church, which had previously been displayed throughout parishes in El Salvador.

“The idea has been to highlight Romero’s message, to keep his legacy of justice and truth strong […] We link the celebration to migration because it is a reality in our country and there are many violations of the rights of migrants, at times committed by the authorities themselves,” explained José López, a spokesperson for CRIES.

The group began its journey from El Salvador on May 28 and crossed Guatemala and Mexico, entering the United States through the California border near San Diego on June 9. They visited several shelters and had ecumenical celebrations in different cities along the way, said López.

For Alvarado one of the most powerful experiences was in the Migrants House shelter, “Las patronas” in Veracruz, Mexico. “With them [the pilgrims] we saw people boarding ‘the Beast’ [the Mexican train migrants us], we brought food and water there and heard some very raw testimonies.  What our migrant brothers [and sisters] went through made a big impression on us. It’s admirable how they are welcomed in the shelters.”

The United States Border Patrol classifies two or more relatives traveling together as a “family.” According to its statistics, around three Salvadoran families enter the United States illegally every hour. Between October 2015 and April 2016, the U.S. government reported the arrest of 13,392 Salvadoran families on the Mexican border. Added to them there were 11,009 Guatemalan and 9,422 Honduran families in the same time period.

“Traveling [undocumented] to the United States is dangerous; we have seen it. We know that our people do it because of necessity, violence or lack of work. We want to arrive in Los Angeles and tell the government [of the U.S.] that migrants have rights,” said Alvarado during a telephone interview while on the journey.

Activities in the United States 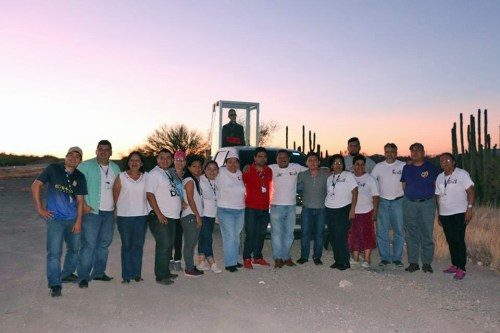 The pilgrims posed for a photo at the U.S.-Mexico border.

After crossing the border, the pilgrimage joined a group of parishioners headed by San Diego Bishop James Mathes and held an ecumenical service at the border fence on June 10 before heading north to the Diocese of Los Angeles.

“We want to speak honestly about what it means to us, as Christians, to follow the example of Msgr. Romero. Especially these days, with so many acts of violence against immigrants, it’s extremely important […] not to remain silent and to work for justice for every human being,” said the Rev. Nancy Frausto, priest-in-charge at Trinity Church in Los Angeles.

The idea for the pilgrimage came from the Diocese of Los Angeles, where there is a large Latino community with many Salvadorans among them, said Alvarado, adding that both the dioceses of San Diego and Los Angeles supported the pilgrimage.

Frausto said Romero’s call to work for justice is still alive and that the group’s pilgrimage carrying Romero’s image means a lot to the faithful.

“Just knowing that the image of Msgr. Romero that pilgrimage carry has made the journey that so many of our parishioners have traveled is something very moving. It is a reminder that God protects us, that there are people praying for us. It’s something great,” she said.

The Diocese of Los Angeles has a program of accompanying adults for immigrant children and teenagers that come to the United States without any relatives to take care of them. The program offers the possibility of living in the home of Episcopalians, as well as legal counsel for minors. The diocese also relies on the Interfaith Refugee and Immigration Service, which provides support for adult immigrants, said Frausto,

Romero’s image and the group of pilgrims will continue visiting churches of different denominations in California, carrying the message of justice, faith and hope proclaimed by the beloved Salvadoran archbishop.

– Clara Villatoro is a journalist based in San Salvador, El Salvador.