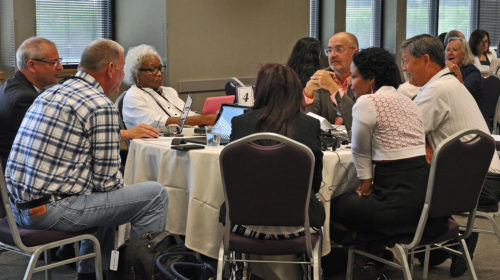 [Episcopal News Service – Chaska, Minnesota] The Episcopal Church Executive Council June 10 pledged to meet a request for $600,000 in financial aid from the Diocese of Fort Worth in the same spirit of creativity that Episcopalians there have used in reorganizing themselves during the past nearly eight years.

With Presiding Bishop Michael B. Curry calling it not a bailout but an investment in new ways of being church, the approval came on the last day of council’s June 8-10 meeting here.

The continuing Diocese of Fort Worth has been reorganizing since November 2008 when a majority of former clergy and lay leaders voted to leave the Episcopal Church. When council last met in February, it gathered in Fort Worth and heard stories of how the diocese does not want to simply reconstruct itself but instead is transforming the way the Episcopal Church ministers in the 24 counties of north central Texas. In part, that effort comes out of necessity as the Episcopal Church and the diocese seek to recover property and other assets still controlled those who left.

For instance, the work in some places means worshipping in unconventional spaces such as a theater and a strip mall.

And the diocese has built new ministries such as a Thursday lunch program that serves more than 300 Tarleton State University students at St. Luke’s Episcopal Church in Stephenville. Along with helping hungry college students who are trying to stretch their meals plans by making them feel at home, there’s a prayer box for them to leave requests. Using those requests, the volunteers pray for those students on an on-going basis.

During the February meeting council received a request from Fort Worth for $600,000 for the next two years. Over the course of the Chaska meeting, council’s Joint Standing Committee on Local Mission and Ministry, later along with the Finances for Mission committee, came up with a plan to fund most, if not all, of the proposal.

The Rev. Frank Logue told his council colleagues that the LMM committee had worked with representatives from Fort Worth since February to creative ways to fund their request, given that trying to find a spare $600,000 in the church’s 2016-2019 budget felt “sort of like a fool’s errand at this point.” And so LMM proposed a plan “which comes to you with tears of joy,” Logue said, that “allows what feels like to me a miracle to happen.”

According to committee discussions and the formal resolution passed June 10, council agreed to grant $107,500 to the diocese for its evangelism and church growth ministries in 2016, and $55,000 each in 2017 and 2018. The diocese was encouraged to apply for nearly $188,000 in grants from the Resolution D005 church planting process. Council also committed to helping Fort Worth find other sources of grants and donations for another $200,000.

The funding, which will be matched by the diocese and its congregations, will pay for a curacy program to employ and train new priests, help bring clergy who are being paid for half-time work up to full-time salaries, and to hire church planters.

The Very Rev. Brian Baker, council member from the Diocese of Northern California, argued during a June 9 Local Mission and Ministry committee meeting for a new approach to how the church helps struggling dioceses. “This isn’t a request for money to keep a sinking ship from sinking, which is a lot of what the church has wasted money on,” he said. “This is a growth opportunity in a diocese that’s growing significantly, and if we just help them with a little more, there’s a big pay-off.”

Fort Worth has 17 congregations, including a Lutheran congregation pastored by an Episcopal priest. The diocese has seen a 19.3 percent increase in communicant members and an 11.9 percent increase in operating revenue. Since reorganizing in 2009, Fort Worth has annually paid the full amount asked of it by the Episcopal Church to support the churchwide triennial budget.  It is the only one of six dioceses in the state of Texas to do so. 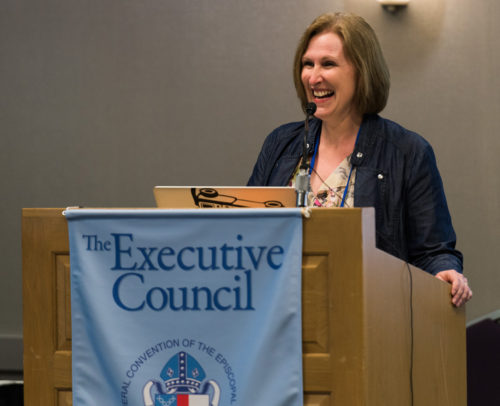 The Rev. Janet Waggoner, canon to the ordinary in the Diocese of Fort Worth, thanks Executive Council for its support of what she called the work of resurrection that is ongoing in the diocese. Photo: Brian Baker

“It’s really important to our morale to continue to pay our full assessment,” the Rev. Janet Waggoner, canon to the ordinary in the Diocese of Fort Worth, told the Local Mission and Ministry committee during a June 8 meeting.

She said she is a latecomer to the transformation of the diocese. “It’s the people of God of the Diocese of Fort Worth who are doing this work,” she said. “They would do it all out of their own pockets if they could, but they can’t.”

After council passed the resolution, Waggoner told the members that “the growth, the resurrection continues to roll out as together we lift up the name of Jesus” in the diocese.

“This is the Jesus Movement on the ground and I am so thankful to be a part of it myself and to have this connection with the whole of the Episcopal Church because this story is our story. May the light of the Gospel spread abroad in every way and if we can be an example we are happy to do that,” she said to applause and a standing ovation.

During a post-meeting news conference, the Rev. Gay Clark Jennings, president of the House of Deputies and vice chair of council, said Fort Worth and the other emerging dioceses could teach the rest of the church. Jennings recently met with the bishops in Fort Worth, Pittsburgh, San Joaquin and South Carolina who, she said, told her that those dioceses have all faced, not through own choice, enormous changes of the kind that the rest of the church is going to have to face or is already facing in terms of diminished assets like revenue and property.

“I think they have an enormous amount to teach the rest of us,” she said, adding that all of those dioceses have faced the grief of their losses and are now “turning it into a faith-based stance” of discerning who they are called to be by God in their context.

“I think they bring enormous hope to the rest of us,” she said. “Frankly we may think we are doing things for them by Executive Council adopting the resolution and giving them $600,000, but I think what we have not measured yet the amazing things they are teaching the rest of us. We really have to pay attention and learn from those dioceses.”

Presiding Bishop Michael B. Curry concurred, saying the plan is “not a bail-out; this is an investment to move the church forward.” He called it a “major evangelical initiative in an emerging context,” creating other models for the rest of the church.

Executive Council’s Joint Standing Committees on Finances for Mission and Local Mission and Ministry met together June 9 to agree to find ways to support the growing mission and evangelism in the Diocese of Fort Worth. Photo: Mary Frances Schjonberg/Episcopal News Service

The June 8-10 meeting took place at the Oak Ridge Hotel and Conference Center in Chaska, a southern suburb of Minneapolis and St. Paul.

A summary of resolutions council passed during the meeting is here.

Previous ENS coverage of the Chaska meeting is here.

Council next meets Oct. 20-22 in New Brunswick, New Jersey, during which the members are expected to visit the Episcopal Church Center, about 40 miles northeast in midtown Manhattan.