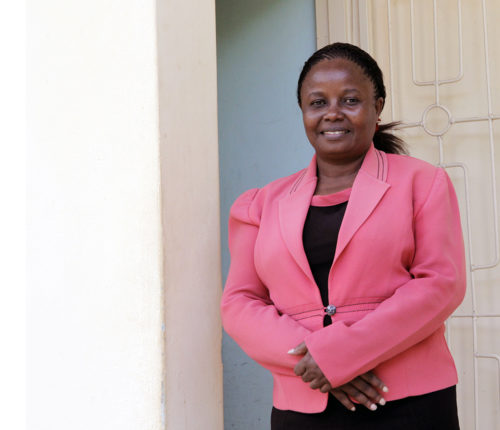 Prior to leading the theological college, Kabia served nine years as dean of students and an assistant lecturer at both Msalato and St. John’s University of Tanzania, an Anglican institution in Dodoma.

Ordained a deaconess in 2003, a priest in 2004 and named a canon in 2015, Kabia has since 1992, when she was a student at St. Philip’s Theological College in Kongwa, become used to paving the way for other women.

Reflecting back on her time at St. Philip’s in the early 1990s, Kabia said, “It was hard for us. All the male students were questioning why women were studying theology.”

The female students would teach Sunday school and lead Bible study, but did not assist during services. “At the time people were not willing to accept women serving at the altar,” she said, adding that the first time a woman was added to the roster to assist during a service, many of the male students walked out of the classroom.

Times have changed in the Anglican Church of Tanzania and the Diocese of Central Tanganyika, said Kabia, who wrote a dissertation on the place and role of women in the church. Still, she added, it’s harder for women, many of whom need to work to support their families and who haven’t had the same opportunities for secondary education as their male peers.

Msalato’s mission is to be a theological education training center for church leaders, lay and ordained, male and female, to prepare them in order to serve God and his people in their particular context. Furthermore, in its philosophy, Msalato commits to gender equality.

Today, 12 of the 62 students studying theology at Msalato are female.

Increasingly, across the diocese, young women are expressing an interest in theological education, said Bishop Dickson Chilongani, who explained that up until two years ago, the Diocese of Central Tanganyika was the only diocese in the Anglican Church of Tanzania that ordained women.

“For me I find the ministry in very good balance when you have men who are priests but also women who are priests,” said Chilongani. “Women are doing very, very well … They are holding very important positions in the diocese.”