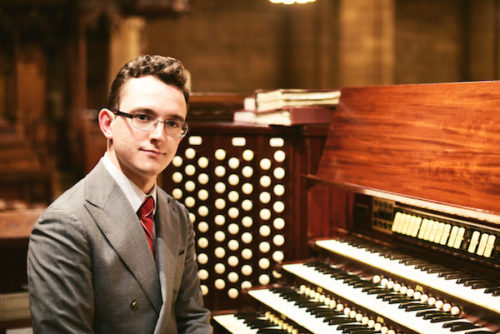 [St. James Episcopal Cathedral press release] St. James Cathedral of the Episcopal Diocese of Chicago has announced the appointment of Stephen Buzard as director of music, effective Sept. 1. At St. James, Buzard will be organist/choirmaster for the cathedral choir and principal musician of the cathedral, responsible for leading, managing and coordinating the music program as an effective part of the cathedral’s overall ministry.

Currently acting organist and director of music at Saint Thomas Church Fifth Avenue, New York, Buzard is a graduate of Westminster Choir College (2010) and Yale University Institute of Sacred Music (2013). He was winner of the 2010 Arthur Poister Competition and was recently named one of the top 20 organists under 30 by The Diapason magazine. Buzard’s premier recording, “In Light or Darkness,” (Delos) has received wide critical acclaim.

“Everyone at St. James Cathedral is thrilled that Stephen Buzard will be our next director of music,” said the Very Rev. Dominic Barrington, cathedral dean. “We believe that he will bring a superlative mix of musicianship and vision to lead our music program into the future.”

“St. James Cathedral has a robust musical heritage,” Buzard said, “and I feel deeply honored to be walking in the footsteps of Dudley Buck, Clarence Dickinson and Leo Sowerby. Moreover, I am keen to find new ways for our music program to better serve this congregation, to more fully engage the greater artistic and spiritual community of Chicago, and to be a beacon of excellence in our Episcopal musical tradition.”

Buzard has studied organ performance with Ken Cowan and Thomas Murray, and improvisation with Jeffrey Brillhart and Bruce Neswick. He became assistant organist to John Scott at Saint Thomas Church Fifth Avenue in 2013 and has served as acting organist and director of music following Scott’s untimely death in August 2015. Buzard was organ scholar at Trinity Church Princeton, New Jersey, Wells Cathedral (U.K.) and Trinity on the Green, New Haven, Connecticut. He has also served as organist for the Episcopal Church at Princeton University, and for Yale University’s Marquand Chapel and Berkeley Divinity School.

Buzard grew up in a pipe organ household, his mother, organist choirmaster of the Chapel of St. John the Divine, Champaign, Illinois; his father, president and artistic director of Buzard Pipe Organ Builders. While in high school, he began organ studies with Dana Robinson, professor of organ at the University of Illinois at Urbana-Champaign.

St. James Cathedral is a parish and cathedral church located in the heart of Chicago, one of our nation’s busiest urban environments. The congregation draws members who are diverse in age, race, ethnicity, background, and geography—from downtown, across the city, and the suburbs. The Cathedral’s diversity also extends to worship, which balances traditional liturgy with progressive, theologically grounded preaching that aims to be both welcoming and spiritually transformative.