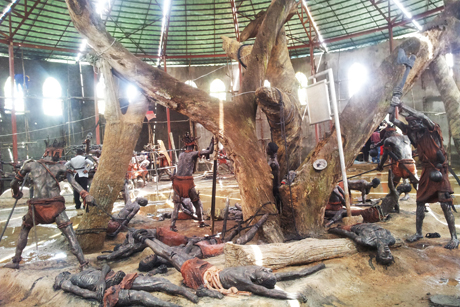 Renovations underway at the Anglican Shrine to the Uganda Martyrs in Namugongo. Photo: Hannington Sebuliba

[Anglican Communion News Service] For the last week all roads in Uganda have been leading to the Namugongo Anglican site where more than 20 Anglican Christians were brutally murdered more than a century ago. Thousands of pilgrims have made the journey over hundreds of miles to reach the shrine of the Christian martyrs remembered on the anniversary today (June 3).

The martyrs were killed at the order of the king of Buganda kingdom, Kabaka Mwanga. On June 3, 1876 he ordered the killing of all the newly converted Christians. The martyrs included Anglicans, Roman Catholics and Muslims. All the Christians killed had been converted a few years after the arrival of missionaries from the U.K.

The Roman Catholics were the first to recognize the 22 victims as martyrs and commemorate the day on which they were killed. Three popes have visited the Roman Catholic shrine where the Christians were killed and the martyrs have now been recognized as saints.

Anglicans also visit a dedicated shrine on the site and hold prayers to mark the 23 martyred for their faith. It is now an established pilgrimage place where thousands of Anglicans travel each year on June 3.

The Rev. James Kato, a member of this year’s organizing committee, said, “As a sign of showing solidarity with martyrs, the pilgrims walk from their homes to the shrine established at the site where the Anglican martyrs were killed.”

More than 200,000 Anglican Christians were now camping at the compound next to the shrine and many more are still on their way. “Many Christians walked from within Uganda, others have arrived from neighboring countries like Kenya, Tanzania, Rwanda, Burundi, Democratic Republic of Congo and South Sudan and many more are coming,” Kato said. The biggest number will be brought in by vehicles on June 3.

Security is tight at the shrine. The Roman Catholic shrine is located just under a mile away from the Anglican site and is equally packed with pilgrims. At both shrines there are pilgrims from Europe and the U.S. and organizers are expecting greater numbers this year than ever before. On Wednesday, Uganda’s president, Yoweri Museveni, visited the sites and addressed the pilgrims.