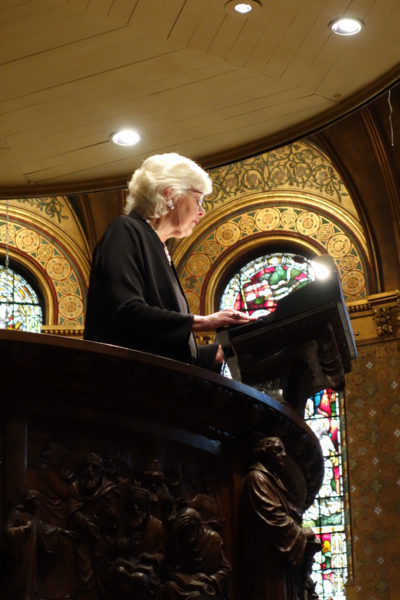 The Hon. Margaret Marshall, former chief justice of the Massachusetts Supreme Judicial Court, gave the homily at Trinity Church to honor the one-year anniversary of the U.S. Supreme Court’s decision for marriage equality.

[Trinity Church Boston] “Who am I to judge?” These words echoed repeatedly through the sermon given at Trinity Church in Boston by the Hon. Margaret Marshall, retired chief justice of the Massachusetts Supreme Judicial Court, at a choral Evensong in thanksgiving for marriage equality throughout the United States and throughout the Episcopal Church.

Quoting Pope Francis’ now-famous remark, Marshall expanded it into a wry and moving refrain as she spoke on the judicial system’s role in protecting the rights of minorities, the “noisy, and messy and jagged” workings of democracy, and the command of faith to strive for justice.

Marshall authored the 2003 decision in Goodridge vs. Department of Public Health, which declared that the Massachusetts Constitution prohibits the state from denying same-sex couples access to marriage. Reflecting on the court’s decision and the resulting political firestorm 12 years later, she offered a stirring witness to faith both in constitutional democracy and in the ideals of Christianity:

“Argument and counter-argument, give and take, push and pull, election and defeat, try and try and try again: this is how democracy works. This is how justice works… it is not for the fainthearted. It takes sustained commitment over many years. It demands a belief that equality and justice and dignity, that freedom and inclusion and peace and prosperity for all, are worth fighting for. It demands courage.”

Trinity Church Boston hosted the Evensong to mark the approach of the one-year anniversary of marriage equality in the United States and the Episcopal Church. Several hundred people, both Trinity parishioners and community members, filled the spacious historic church for a traditional service of choral Evensong sung by a full choir of adults and youth.

The Rev. Samuel R. Lloyd III, rector of Trinity, presided and offered an opening welcome: “[The late Bishop of Massachusetts] Tom Shaw… told us that marriage equality was one way that we were being called to live more deeply into Christ’s ethic of love. So tonight, together, we reach into the heart of our own tradition for ancient words that tell the story of that saving love, and for the strength that helps us continue to make that love known in our own time – in, among and between every one of us, every single child of God’s, of every orientation, class, race, and gender identity.”

In addition to the musical offerings — including a setting of E. E. Cummings’ poem “I Thank You God” by Eric Whitacre and an acapella rendition of “America the Beautiful”) – parishioners read prayers of thanksgiving. The celebration continued after the service with a wedding-cake reception.

According to the Rev. Patrick Ward, associate rector for welcome, the service was originally conceived of in the immediate wake of the Supreme Court decision last year, but postponed out of a desire to do it carefully and well. “Then when the Episcopal Church decision came about on July 1 last year, we thought, you know, this is bigger than we could have anticipated. We thought it best to wait a year, to do this carefully and thoughtfully, and to bring really the best of our tradition to this service.”

Having LGBT equality affirmed and celebrated within the context of their own faith community was deeply healing for some: “Growing up as I did… I didn’t personally have any interest in being part of any religious tradition, given how hostile religious communities were to gay people,” said Mark Kharas, minister for welcome and growth. “It’s very special for me to have a service for marriage equality that is specifically a religious service within our religious tradition.”

And for those who are only too used to hearing Christianity equated with intolerance toward LGBT people, the service marked an opportunity to proclaim a commitment to equality and inclusion as part of the Christian faith. “A lot of what people see as Christians is not very nice,” said Frank Furnari, an event volunteer and member of Trinity. “So having an event like this — I definitely like that we are doing this and I definitely wanted to be a part of it.”

At the close of her sermon, Marshall quoted the words of the vows taken and re-affirmed by baptized Episcopalians, saying, “We, you and I, are commanded by our faith to strive for justice and peace among all people, and to respect the dignity of every human being.”