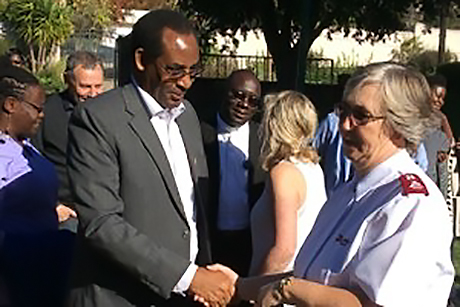 [Anglican Alliance] Representatives from Anglican and Salvation Army churches across Africa met in Cape Town last week to share insights and build a common vision on how to tackle human trafficking and modern day slavery.

The consultation aimed to create an Africa-wide understanding of the trends of human trafficking as well as trafficking to and from Africa. Participants listened to painful and courageous testimonies of survivors as well as engaging with government and U.N. officials to understand the unique contribution that churches can play in tackling human trafficking.

It is estimated that between 25 and 37 million people world-wide are caught up in modern day slavery.

The consultation was one of a series organized by the Anglican Alliance around the Anglican Communion to help share learning and equip provinces and their local churches to respond effectively to the issues. It was jointly convened with the Salvation Army and held under the auspices of the Council of Anglican Provinces in Africa (CAPA). It was hosted by Hope Africa, the relief and development arm of the Anglican Church of Southern Africa.

June Nderitu, Anglican Alliance regional facilitator for Africa, based at CAPA, said, “What strikes me most is the strength of partnership, because we realize that there is no church or organization which can deal with this issue on their own. We have explored how we can bring our skills and resources into this partnership so that together we can tackle this problem of modern day slavery and human trafficking.”

The Archbishop of Canterbury has recognized the issue as a priority concern. In 2014 he, Pope Francis and other faith leaders signed a Declaration to End Modern Slavery. The Anglican Consultative Council has also repeatedly raised its concern, with voices from every part of the Communion.

The Rev. Emmanuel Chikoya, from the Anglican Church in Zambia, said, “This meeting has galvanized me to think of ministry in a holistic manner. It is a wake-up call, especially with the silent issue of human trafficking.”

Maged Yanny, director of the social care programmes for the Episcopal Diocese of Egypt, highlighted the growing and sophisticated crime of trafficking in human organs. “We need to make our people and the church aware of the challenge. I think the church can play a leading role in this area. The Anglican Alliance and CAPA can build an inclusive coalition to increase awareness of the seriousness of the problem of human trafficking and organ trafficking,” he said.

Representatives from Stop the Traffik introduced their new mobile phone initiative, called Stop App, being promoted to gather information on the routes and hotspots of human trafficking, which is vital to combat global organized crime.

The consultation concluded with a declaration, which lays out the vision of the participants, “calling on all our churches to include the issues of anti-human trafficking on their agendas in a significant way at local, national and global levels.”

One outcome of the consultation was a strategy of 6 Ps+1:

The Rev. Rachel Carnegie, co-executive director of the Anglican Alliance, said:“These are all covered by the seventh P of Prayer. The consultation committed to promoting a ‘Freedom Sunday’ across their churches, adapting resources to their local context.”

She added, “It has been an inspirational week, hearing from churches across Africa on how they are tackling human trafficking. We will continue to work alongside CAPA and Hope Africa, helping to equip the provinces and churches in Africa to respond in their own context.”