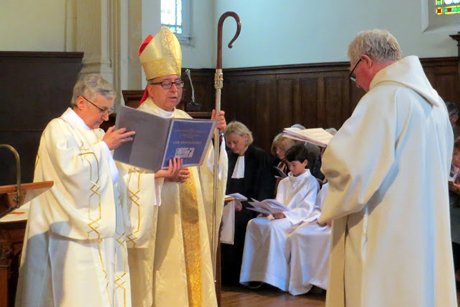 The Rev. John Neal is licensed by Bishop in Europe David Hamid, as the priest in charge of the Diocese in Europe’s newest parish: the Church of St. Alcuin of York in Touraine, central France. Photo: Eurobishop blog

[Anglican Communion News Service] The Church of England’s Diocese in Europe has opened a new parish in central France. The new church of St. Alcuin of York will serve an English-speaking congregation in the Touraine. It will meet in two separate buildings: l’Eglise Protestante in Tours and the Roman Catholic l’Eglise St Michel in Savigny-en-Véron.

Bishop in Europe David Hamid, licensed the new priest in charge, the Rev. John Neal, at a special service last weekend which was attended by both the pastor of the Eglise Protestante and the vicar general of the Roman Catholic Archdiocese of Tours, as well as the Baptist pastor from an English speaking independent church in the area.

During the service, the new church wardens were admitted to their office and two young acolytes received crosses as they began their own work of serving at the altar. The active involvement of youth in the services is a key strategy of Neal.

“It was a joyful occasion, celebrated in the Protestant Temple in Tours,” Hamid said on his Eurobishop blog. “The music was splendid from a largely francophone choir, and the organ music very fine indeed. . .

“The first Anglican services in Tours were actually 200 years ago, but there has been no Church of England activity for close to a century. Under Father Neal’s leadership, the Church is now organized again, and poised to serve English speaking Christians in the Touraine.

“The vision of the parish is to be a serving community, as the parish website eloquently puts it: ‘A Church is a community which exists for others. So, when we come in through the door, it is expressly to go out again to our everyday lives and relationships. The proclamation of scripture, the consecration of bread and wine, our receiving Holy Communion, all lead to the climax of our worship — the Dismissal: “Go in peace to love and serve the Lord.”’”

Hamid said that it was “wonderful to witness yet another new community in the diocese.”

He added: “Tours is the city of St Martin, and this year the city celebrates the 1,700th anniversary of the saint’s birth. He is one of the most popular saints in Europe. There are around 3,000 parishes dedicated to him, including the oldest church in Canterbury (where St Augustine baptised King Æthelberht of Kent) and the famous St Martin-in-the-Fields in London.

“St. Alcuin of York, our new parish’s patron, was an Englishman and scholar, who became one of Charlemagne’s closest advisors, and who later lived at Marmoutier Abbey which was founded by St. Martin. St. Alcuin died in 804 in Tours.”