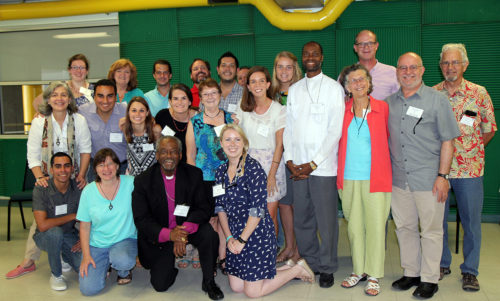 [Episcopal News Service] “If you have come to help me, you are wasting your time. But if you have come because your liberation is bound up with mine, then let us work together.”

Lilla Watson, an aboriginal elder, activist and educator, from Australia is credited with these words, spoken by her and others in the early 1970s at a time when white Australians were becoming aware of the effects of racism and colonialism on the country’s indigenous people. These words were not only meant to challenge people working toward social justice, but reflected the frustration felt by the Aborigine toward the efforts of whites who in their offers of assistance, further perpetuated colonial perceptions and attitudes.

Being a missionary, she said, is about “experiencing the love of God in Christ together.”

The Global Episcopal Mission Network, or GEMN, annually brings together short- and long-term missionaries to empower and educate them in their work. Increasingly, the old way of being a missionary , and of mission trips focused on projects and doing things for others, is being replaced by a model centered in mutual respect and accompaniment, and developing a deeper understanding of one another’s context.

“We still have a tendency in the Episcopal Church to want to, as many people have said before, we want to try to fix things for others and we see that as something that is important for us, but while we can work alongside our partners in helping them strengthen their communities, being present I think is even more important,” said the Rev. David Copley, the Episcopal Church’s officer for mission personnel and global partnerships.

Copley’s office provides support for 51 adult and young adult missionaries in 20 countries around the Anglican Communion.

Since his consecration in November 2015, Presiding Bishop Michael Curry has shared his vision for the Jesus Movement and its two components – evangelism and reconciliation – and what it means for Episcopalians and the Episcopal Church to be a part of that movement. In his keynote address to the more than 120 people attending the GEMN conference, he talked about mission as a way of embodying Jesus in the world.

“Bishop Curry talked about evangelism a lot and I think one of the things that our missionaries are learning and sharing is very much what we talk about as an ‘incarnational theology of mission,’ that sense of Christ is present amongst all people,” said Copley. “We are definitely not going to bring Jesus and share the Good News because it’s already there. But what we are doing is if we enter into a meaningful relationship then we see the Christ in the other and they see the Christ that is in us.

“I think that there is also a mutual evangelizing that is happening when we are in a meaningful relationship. And again that was something that Bishop Curry touched upon in his opening talk when he talked about that sense of if you are living in the Jesus Movement then that comes out through your very being.”

Twenty young adult and adult missionaries attended the GEMN conference, where they had the opportunity to share their experience with the presiding bishop and talk about mission and the Episcopal Church. They also shared their experiences with others on a panel where they answered questions such as, “How did you discern your call for long-term mission.?”

For Monica Vega, a long-term missionary who served in South Africa for 14 years and now serves in Brazil, one man’s example led her to missionary life. When Vega was in her early twenties and living in Buenos Aires, Argentina, she’d cross the city by bus on the weekends to volunteer in a shantytown where a man simply referred to as “Brother Domingo” repaired shoes.

“He was this tiny guy with a thick French accent working on shoe repairs … and this man was a missionary and he was living among the people there and his only work was repairing shoes and he was the center of that shantytown,” said Vega during the workshop. “He didn’t do anything in the way of preaching, from time to time he’d do a Sunday school or prayer, but he said that really wasn’t his job, and one day I said, I want to do that.”

For Alan Yarborough, who served two years as a YASC missionary in Haiti and who then stayed on to work at the St. Barnabas Center for Agriculture in the country’s north, he knew upon graduation from Clemson University in South Carolina that he wanted to experience of living and working abroad. Initially, he considered applying to the Peace Corps, but upon learning about the YASC program, he decided he wanted an experience where he’d be in relationship with others in the Episcopal Church, not just an American abroad, he said.

In his second year of service in Haiti, Yarborough built time into his schedule to return to South Carolina, building stronger connections between parishes in the Diocese of Upper South Carolina and in Haiti.

“That’s the real mission, bringing it back,” said Heidi Schmidt, in response to what Yarborough shared during the panel.

Schmidt served alongside Vega in South Africa where they helped build Isibindi, a community-based program that trains unemployed community members to provide child and youth care services that allow orphaned children to be cared for in their communities by older siblings or other family members.

Schmidt and Vega worked with locals, training them to run the program and eventually turning it over to them. They now work in São Paulo alongside women street venders, providing support for them, many of whom are migrant workers and vulnerable to gender-based violence.

“Heidi and Monica spent seven years working in South Africa with a phenomenal program … this model was adopted in other parts of South Africa and is continuing today even though they are not there because they helped empower and  enable the community to continue that ministry,” said Copley. “They moved to Brazil and will only stay there as long as they feel they have something to contribute.”

In Vega’s words: “You arrive where no one needs you and you leave when people think they need you.”

Missionaries are not bringing God to communities, God already is there and they are not there to solve problems, build infrastructure or teach in schools; they are there to be present and learn about the lives of other people in community with them.

“The reality is that in most parts of the world there are teachers and nurses that are able to do the work that missionaries used to be doing 50 to 100 years ago,” said Copley. “We want to make sure we’ve transitioned away from a colonial model and now we want to make sure we move away from a paternalistic model into a model where there’s mutual learning from one another.”

“I think sometimes we can focus so much more on the task itself and very little time on getting to know and understand one another,” said Copley. “I think in our culture we feel not that it’s a waste of time, but I think we feel as if we need to have what we see in our culture as meaningful experience and contribute something physically to a partner to make the trip worthwhile. We have to do something physical otherwise we can’t justify this, I think it’s allowing ourselves the understanding that we can justify a deepening a relationship in some ways as a more meaningful way of engaging in mission.”