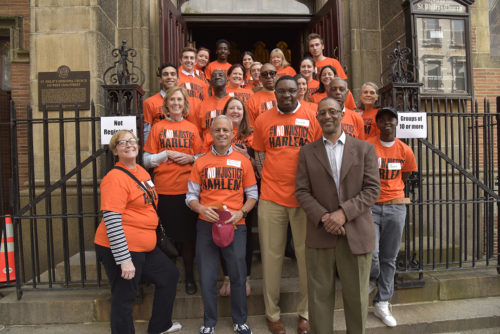 [St. Philip’s Episcopal Church] Residents of Harlem, along with several nonprofit and religious organizations, joined author Bryan Stevenson to discuss the impact of incarceration on the Harlem community. The May 23 event, titled #KnowJusticeHarlem, was hosted by Circles of Support, a network of faith and community partners providing services to previously incarcerated men and women returning to Harlem on parole. The event took place at St. Philip’s Episcopal Church, the oldest black Episcopal parish in New York City. The Rev. Patrick Williams of St. Philips welcomed an audience of more than 400 people.

Each year, hundreds of previously incarcerated men and women return home to Harlem, one of the country’s poorest neighborhoods. Here they are faced with a number of challenges, including high unemployment and unstable housing. By fostering a more supportive environment upon re-entry into Harlem, Circles of Support aims to break the cycle of crime and incarceration within the community.

In his keynote address, Stevenson, founder of the Equal Justice Initiative, suggested ways in which communities of faith can address mass incarceration and its negative consequences, emphasizing the need to remain hopeful about enacting change.

“Injustice prevails where hopelessness persists,” he said. “I have never seen injustice overcome by only doing what is convenient.”

As the master of ceremonies, actor and poet Craig “muMs” Grant stressed the need for criminal justice reform.

“People often look at crime as an individual choice, but we need to change that narrative,” he said. “The U.S. incarcerates people at higher rates than any other country in the world. This system focuses on punishment and incapacitation as opposed to rehabilitation and restorative justice.”

Harlem is a community of faith, with over 400 houses of worship. Episcopal churches in Manhattan, such as St. Philips, St. Mary’s, St. Ambrose, and All Souls, are places of welcome for people returning home from prison. They contribute to a number of important supportive services, including the provision of job and skills training, childcare, and counseling.

“This evening we have been able to listen and learn from the families most involved in our criminal justice system, and we are committed to continuing our support for the work here in Harlem,” said Chris Flowers, chairman and chief executive officer of the J.C. Flowers Foundation.

Monday night’s event included a panel of community members who discussed a range of issues affecting the community, for example, the impact of incarceration on families, and the ways in which limited access to jobs and quality education contribute to crime. Panelists also touched upon the harm of sentencing children to adult prisons.

Members of the audience were able to participate in the Raise the Age letter-writing campaign by signing and sending letters to the New York state legislature, urging them to raise the age of criminal responsibility. Currently, New York is one of only two states in the country where the automatic age of criminal responsibility is still 16 – a policy resulting in harsh sentencing for children.

“Tonight’s event is just the start of an important conversation,” said Thomas Edwards, community engagement specialist with Circles of Support. “The speakers and panelists drew much-needed attention to issues disproportionately affecting our community, such as mass incarceration and re-entry. This type of community engagement is critical to building a stronger community and stronger families.”

The event was sponsored by a diverse group of partners, including JC Flowers Foundation, Church of the Heavenly Rest, the Interfaith Center of New York, the Harlem Community Justice Center, and Network in the Community.